Hinch’s Senate Diary: the good, the bad and the way too long in first speeches

Yes, my first speech was way too long. But Pauline Hanson's was not as bad as everyone was expecting -- and the Greens were very rude to walk out, writes Senator Derryn Hinch.

OK, I’ll admit it. It was long, far too long. I had trialed my Senate first speech, but obviously, in rehearsal, I had delivered it at the usual Hinch machine-gun rate of around 190 words a minute.

Now I guess it goes into the record books as the longest first speech ever, and I suspect I am the first senator called to order by the Senate President when the tradition is for first-timers not to be subjected to interjections.

Nick Xenophon remonstrated with my staffers about giving me such a clock-busting speech until they pointed out I’d written it myself. It’s true: nobody saw it before I delivered it. Not even a lawyer.

Xenophon also offered a journo with 55 years of experience any help with editing. But that’s Nick.

In the speech, I did make good on my election campaign promise to name names as part of the quest for a national public register of convicted sex offenders.

The biggest boost to that cause came next day from Victorian Police Commissioner Graham Ashton, who told Neil Mitchell on 3AW that there was merit in a national public register.

And he admitted, for the first time, that there are more than 6000 names of convicted offenders on the national secret register, which only senior coppers can access. (I thought it was 7000. It’s around 9000 in NSW.)

The Commish also admitted that it was impossible for police officers to adequately monitor all the convicted offenders on that list.

As I said in my speech, the current register is mere public relations to make the community feel better or safer.

The best moment for me and my supporters this week came not in the wake of the first speech, but from an adjournment debate the following night. It was a really special moment. A feeling that “This is what I came here for”.

That’s where I broke the story about how McDonald’s had been employing a convicted sex offender at a cafe inside the Panthers Football Club and how the Penrith Baseball Club had earlier employed the man and let him umpire games that his victim was going to play in. And how it turned out that one of Australia’s largest employers of young people had no policy about police checks for employees working with children.

My staff approached McDonald’s on August 31 and, to Macca’s credit, within 24 hours the sex offender had been sacked and the company had started to bring in a tougher employment code with mandatory police checks for staff over 18.

The size of this early political victory sunk in when a supporter texted: “You have changed the employment requirements of one of the world’s largest companies. So proud and happy.”

Let’s devote the rest of the diary to other first speeches.

Pauline Hanson. Despite her call for an immigration ban and herding all Muslims into the Islamic State basket — and proudly noting that her “Asian invasion” in her speech 20 years ago had been superseded by a “Muslim invasion” — the Hanson speech was regarded as milder than expected. I even received emails from people, not her usual supporters, saying things like “Pauline has mellowed/matured and now more likeable”.

I got scalded on Twitter for giving her a congratulatory hug. I thought that was not an endorsement, just good manners. Unlike the Greens who staged a noisy walkout, with leader Richard Di Natale reportedly sweeping behind the One Nation bench with a parting “Fucking disgrace.” 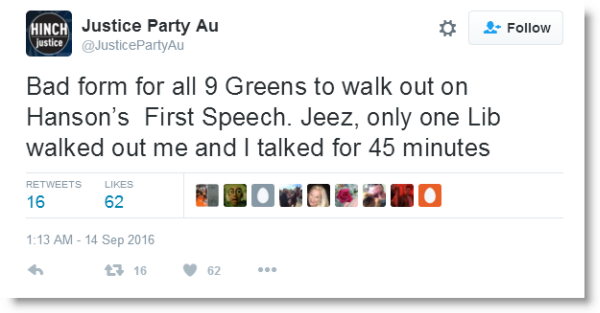 I’m still trying to get my head around the call from One Nation’s Malcolm Roberts for Australia to do a Brexit from the United Nations.

The most moving first speech came straight after Hanson’s divisive effort when the Northern Territory’s Malarndirri McCarthy stood behind an Aboriginal-motif lectern and talked about her indigenous and non-indigenous heritage.

Her direct call to Malcolm Turnbull to stop the plebiscite, not risk a hate campaign and remember what happened to Adam Goodes, was mind-grabbing. And then she talked about her sister, a lesbian, who ended her own personal turmoil over acceptance in her early 20s.

In the congratulatory line-up after her speech I said: “Yours was the one that should have gone 45 minutes.”

Richard Di Natale explained that the Greens sat until Hanson exceeded all limits in her bigoted rant then walked out because it was wrong to dignify her with an audience. They were right. Derryn Hinch’s hug reinforced the rant, whether he meant it that way or not.

Derryn seems to be aping Norman Mailer’s “Advertisements for Myself”.
So, no surprise there then.

Ironically, this article was too long.

If you were truly outraged you would not hide behind parliamentary privilege.So Hinch does not have the courage of his convictions .Not surprised.