Compliments and criticism all same to Hanson. In amongst the conspiracy theories and climate denialism, new One Nation Senator Malcolm Roberts used his first speech in Parliament to recite an ode to his political leader Pauline Hanson, sparing nothing when it came to praise for “our Pauline”:

“Finally, no one can show testimony to my belief in the enduring power of human nature more than the great Pauline Hanson. With the indulgence of this chamber and with the Senator’s permission, I will refer to her as everyone knows — Pauline. Our Pauline, the people’s politician — she is one of us, and we are just like her. She is a woman of great courage to whom I owe being able to stand here today. Pauline listens to understand and is honest, courageous and persistent. Twenty years ago, Pauline, the Establishment ridiculed you. At the same time they quietly started implementing some of your policies. Thank you for saying what you have said and for giving a voice to the forgotten people, and for showing that we really do matter.”

While he said this, the camera panned to Hanson herself as she rolled her eyes and seemed quite put out by the platitudes, but in a Facebook post yesterday, Hanson clarified why she looked so unhappy. It’s not her colleague’s fault, but “narrow minded media outlets”.

“I wasn’t rolling my eyes out of disrespect to Malcolm’s kind words, I was simply embarrassed,” she wrote.

“After 20 years of having most people in the public eye slander and take pot shots, I guess I don’t take compliments too well.” 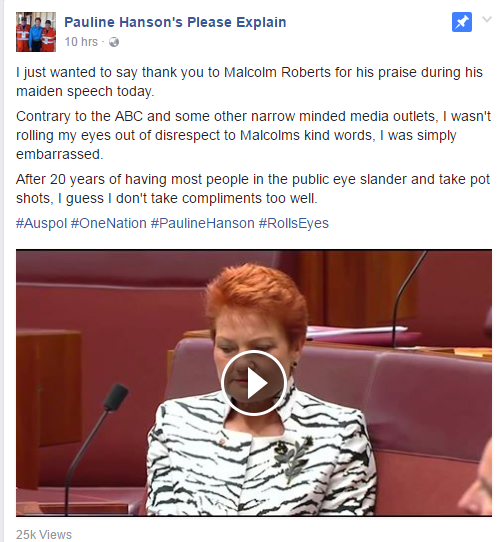 ABS brags about response rates that aren’t that great. In a half-berating, half-bragging press release today, the Australian Bureau of Statistics crowed about its high response rate while also begging people to fill out their census forms if they were yet to do so. The ABS claims that it has received a response rate of more than 90%, but it still wants more. The release also champions the rate of online forms that have been returned, after the computer system designed to take people’s data failed on August 9, the day of the actual census:

“Head of the 2016 Census, Duncan Young, said the Australian Bureau of Statistics (ABS) has now received more than 90 per cent of responses from Australian households, and two million more online forms than in 2011.”

While the release says there have been 2 million more responses than in 2011, it doesn’t mention what the actual number of online responses was five years ago. In 2012 the ABS released data showing that 2,706,581 households had completed the census online, a take-up rate of 33.7%. Two million more households than that number puts the 2015 figure at less than 5 million, well below the number of households that the ABS had expected would complete their census forms online. In the days before the census, Australian Statistician David Kalisch said: “Excitingly, with up to 65% of households, or 16 million people, expected to complete the Census online, the 2016 Census could be Australia’s biggest ever online event.” If fewer than 5 million households have filled out the census forms online, it means that not even half used the online form.

Labor celebrates Malcolm Turnbull’s spilliversary. Ms Tips is sensing that Labor has a theme to its press releases today, but she can’t quite put her finger on it … 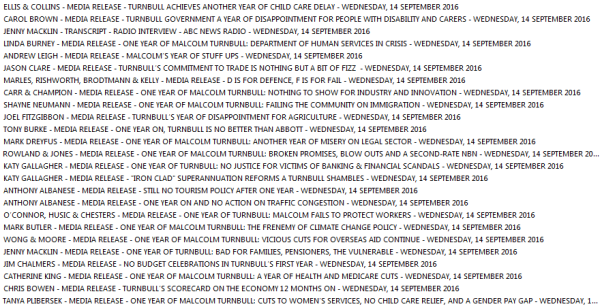 As Malcolm Turnbull uses his first anniversary as Prime Minister to introduce legislation for something he eloquently argued against just before he became Prime Minister, Ms Tips expects there will be much more of that to come.

Abetz draws tenuous links. GetUp is the Australian franchise of American multibillionaire currency-speculator George Soros, reflecting his agendas all the while claiming they are set by supporters. Or so said Liberal backbencher Eric Abetz in a speech to the Senate yesterday. GetUp’s Soros links are a persistent feature of right-wing criticism of the organisation, but in Ms Tips’ opinion there’s been rather more smoke than fire in the allegation. In a 17-minute speech to Parliament yesterday, Abetz set out the most comprehensive examination of what links do exist we’ve seen yet.

There are three planks for Abetz’s argument about Soros’ influence. Firstly, GetUp’s founders, David Madden and Jeremy Heimans, learnt the ropes with Move On, the American digital activist organisation on which GetUp was modelled. Move On has in the past been funded by Soros. Abetz says Heimans and Madden once met with Soros (citing an SMH article), and the billionaire funded the Win Back Respect anti-Bush campaign, which both founders worked on. The second link is that two years after founding GetUp, Heimans and Madden co-founded Avaaz, which, Abetz says, received seed funding by Res Publica, itself funded by Soros (Abetz also identifies some staff movement between the two organisations). Thirdly, Abetz points out that Soros is a firm supporter of the Boycott, Divestment and Sanctions (BDS) campaign against Israel. So is Sara Saleh, a recent addition to GetUp’s board. Ipso facto “the appointment of Sara Saleh to GetUp’s board reflects George Soros’s agenda”:

“In its personnel, its operating model, its financing, and, more particularly, its agenda, GetUp faithfully perpetuates most of the worrying concerns of its progenitor, George Soros. GetUp has now been fully exposed as Soros’ local Australian franchise, operated as a joint venture by the Greens, Labor and the unions.”

Labor and the unions aren’t mentioned until the very end of Abetz’s 17 minute speech, which is funny, because it’s much easier to draw links between GetUp and the Labor Party than it is between GetUp and Soros. GetUp launched with Bill Shorten and Evan Thornley on its board — both quit when they became Labor MPs. Most of its biggest donations have come from the union movement (its single biggest donation was $1.2 million from the CFMEU, Avaaz has contributed just under $200,ooo). Former GetUp head Simon Sheikh became a Greens candidate.

As for GetUp, here’s what they told us:

“George Soros has never donated to GetUp. The claim that GetUp has received funding from George Soros has become a lukewarm conspiracy theory in recent years popular among a subset of right-wing internet trolls.

“As far as we’re aware, George Soros funded a project unrelated to GetUp prior to GetUp’s existence, in which two of GetUp’s founders were engaged, before they were GetUp’s founders, because GetUp didn’t exist yet. You’d have to confirm that with MoveOn or others involved in the project, because GetUp wasn’t involved in the project, because we didn’t exist yet, and so have no records of that project.

“As far as we’re aware, several million people globally have given funds to Avaaz, as its a global, member-driven organisation. You’d have to ask Avaaz if George Soros was among them. If George Soros was among them, his donation to Avaaz was not in any way tied to the project GetUp worked on with Avaaz, any more than any donation from the millions of other Avaaz donors was.

“Every corporation and NGO has board and board members with diverse range of views.”

Never tear us apart? The most exciting place in Parliament to be today will not be in the chamber, but in Leader of Opposition Business Tony Burke’s office. Burke, along with shadow assistant treasurer Andrew Leigh and shadow assistant minister for family violence Terri Butler are doing their best to support Labor candidate in the ACT election (and staffer to Andrew Leigh) Taimus Werner-Gibbings through the power of song. They’ll be singing INXS’ Don’t Change, obviously a message to stick with the Labor Party at next month’s ACT election. Maybe the Liberals could do a performance battle to plug their “New Sensation”?

Abetz and his unhealthy obsession with misinformation re GetUp – this is the princely-paid clown that linked abortions to breast cancer?
What do you have to do to “mislead parliament”?

Oh dear – poor Eric really is upset about Get-Up. He blames them for the loss of three seats in Tas. The seats were lost because the incumbents were arrogant, nasty and lazy, and were not representing their electorates – just two items – opposition to the the super trawler pooh poohed, and nothing done about the ill-thought out back packers tax. But Eric does have a right wing Get-Up – it is called News Corp. How dare voters actually get to make their thoughts and expectations felt in the parliament.

Eric, so green with envy.

Quote: “GetUp is the Australian franchise of American multibillionaire currency-speculator George Soros, reflecting his agendas all the while claiming they are set by supporters. Or so said Liberal backbencher Eric Abetz in a speech to the Senate yesterday.”

If Eric does believe that, shouldn’t he, his party and the American Republicans, be quite delighted by such an example of free market and trickle down economy that that would represent?