Your SUV is killing people and making roads more dangerous

Australia needs to regulate enormous cars, writes economist Jason Murphy, because the current system is an arms race that will end up in fatalities.

After many years of increasing safety on  our roads, we are backsliding. Australian road deaths are up 10% in 2016 compared to last year. (In Victoria, the toll is up 17%.) What has changed? The spread of airbags, ABS brakes and electronic stability control should have made us safer.

The likely culprit is the changing nature of vehicles on the road.

Once upon a time, a person could see over the top of traffic. Cars came up to your shoulder — they were not a visual obstacle. Not now. The steady rise of the SUV is well documented. SUVs will soon be Australia’s most popular type of car. They have risen from 18% of the vehicle market in 2005 to 37% in 2016. 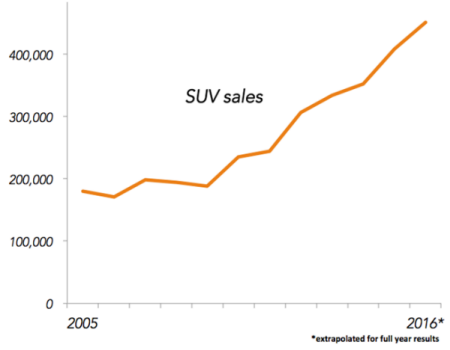 The decline of OPEC and the falling global oil price has removed the only factor keeping small cars in vogue. As a result, vehicles have puffed up like a pack of microwave popcorn.

And the most startling of transformations might be in the humble ute. Utes are no longer based on passenger vehicles. Instead they are more like SUVs — big ones. They have come to resemble the American “pick-up truck”.

The Ranger is an impressive specimen to rest your eye on. It is not a wimpy little vehicle. 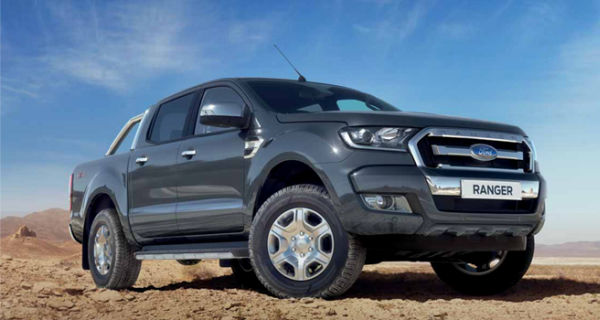 Bigger vehicles afford their occupants more protection in a crash. But it is probably not terrific to be hit by one if you are attempting to make progress by foot, bicycle, or in a smaller car. Anyone hit by a bigger, heavier car has more force transferred into them for a given speed of impact.

An important note on ANCAP ratings is that they don’t tell you if a small car is as safe as a large car. Each vehicle is rated against others in its own category. “It is not appropriate to compare ANCAP safety ratings across vehicle categories,” the assessment program advises.

Given that, you’d be mad to risk hitting a Ford Ranger in a Ford Fiesta. Of course people buy the Ranger. It’s “safer.”  For them, at least.

Effects on people who are not the occupants of the car in question are all but ignored in the discourse on Australian vehicle safety. Pedestrian deaths rose 8% in 2015. ANCAP takes pedestrian safety into account, but then hands out five-star ratings to vehicles, like the Toyota Landcruiser, which has a pedestrian safety rating of “Marginal” — the lowest category.

This is a classic type of externality — the arms race. In an accretion of individually rational choices, we make the world more dangerous for all of us. There is a potential role for someone to step in — perhaps a state or federal government. This is especially so now — fuel efficiency is rising, and the deterrent effect of fuel excise on the purchase of a large car is tumbling. (Those Ford Rangers can use as little as 7L/100km.)

Making such a law might tread on a few toes, but it would be an enlightened choice. Australia has already been Americanised in many ways — TV, language and now cars. It would be a shame to add to that list a blunt unwillingness to make laws about dangerous products.

*This piece originally indicated ANCAP ratings did not take pedestrian safety into account, and has been corrected

Roads, schmoads: Australia needs to ditch its freeway addiction and get on the train

Forget loo roll — the pandemic has led to a dearth of microchips, and that could prove a lot more costly

More than half the cars sold in Norway last year were electric. What’s Australia doing?

You should have evidence to support your premise that the statistics are worse because of the rise in sales of SUVs i.e. Are they the vehicles in the statistics?
I reckon that the rise in sales of SUVs is due to the fact that ordinary sedans have become too low to the ground, so they cannot negotiate various terrain in regional Australia and are too hard to get in and out of compared to say our older Falcons and Holdens. Also explains the fall in sales of the same. Problem of management, bad decisions, as confessed by at least one manager recently.
Most SUVs are actually not that large, however the ‘ute’ you are describing is not a ute which was an Australian invention, but indeed a pickup truck.

Agree, nothing here to support this claim. Also, what constitutes an SUV can be a tiny Mazda CX3 or a large Toyota Kluger. Both of these are car based and are essentially the replacements of small and large wagons that have faded away with market preferences, ie they’re just cars slapped with the trendy SUV marketing slant. Ranger is a ladder frame work and off road vehicle which are typically heavier and cruder to drive. This move to SUVs is a clear global trend, not Americanization, if anything it’s the opposite, America is increasingly embracing smaller vehicles (although large pick ups do continue to sell well there).

Last time I looked, and it was not that long ago, the biggest selling vehicle in the world … in the WORLD … was the Ford F150 single cab pickup, based, it has to be said, on US sales. I remember driving through the southern states of US and thinking, ‘these Americans sure have a lot of haulin’ to do’ and I was always amazed to see a shiny (usually red) pickup outside a very humble home (not much more than an Atco hut in many cases) as a potent symbol of the truck being much more important than the family home. There’s not much logic to it especially as the pickup is such a dog of a vehicle.

Biggest seller in the world is the Toyota Corolla – Volkswagen Golf is second.

Further, I understand that most fatalaties have eaten potatos within a week of their incident. Presumably this means potato are causal in road trauma too?

What about the rise in mobile phone use. There is no evidence that hands free is safer than handheld, and I see people everyday in partial or no control of their vehicles because the phone has their attention. Much easier dodging ‘roos out here in the bush than preoccuopied commuters in the city and on the highways.

Get rid of the mantra that safe driving is as simple as obeying the posted speed limit and not driving whilst drunk or asleep and educate drivers, enabling them to make decisions based on the situation, not based on some predetermined set of generic rules.

The roads around where I live look pretty reasonable to me. That can’t explain why there are so many SUVs taking kids to school of a morning. I doubt if many of them ever get off the bitumen.

2.2 tonne Ford Ranger giving 100kms for 7 litres. Is that while it is being towed?

My crowded suburban street now has at least 2 SUVs of the Ford Ranger size, which are basically used for mums to ferry a couple of kids around. They always make sure they take up two street car spaces too.

If you actually bothered to take some measurements, you’d find that the “Ford Ranger size” vehicles that you are whining about are really no bigger in length and width than many “normal” cars, and do not take up any more room at all. The only significant difference in dimension is the vehicles’ height. But let’s not let the facts get in the way of a good bellyache.

If odium were assigned to drivers involved in a fatality in proportion to the mass of their vehicle, quite regardless of whose fault it was, it would increase the pressure on them to drive more safely than smaller vehicles.

One of the sillier articles seen in Crikey recently. Correlation is not causation.
My theory is road users have become more narcissistic. They are way more self entitled and less likely to believe the rules don’t apply to them – including the laws of physics. Road users are driving more aggressively and with less care thus the increase in road deaths.

Google ‘Dunning Kruger Effect’ for an explanation, but basically, we rationalise what we do as OK, but its everyone else that needs to get their act together.