The full page advertisement in The Australian is the brainchild of businessmen who believe they know better than the Defence Department when it comes to submarines.

A group of businessmen has taken out a full-page advertisement in The Australian to encourage the government to ditch its plan to buy diesel submarines from French company DCNS. Gary Johnston, founder of Jaycar Electronics, along with businessman (and close friend) Dick Smith, John Singleton, Boyd Munro and John Tait took out the advertisement warning that the plan to re-engineer a nuclear submarine design to a diesel-powered submarine would be a repeat of the Seasprite Helicopters, the botched acquisition of which cost the government $1.4 billion.

Johnston told Crikey this morning: “It’s just a giant fraud that the Defence Department are trying to foist on the public.”

“I don’t know if Marise Payne and Malcolm Turnbull are aware of what the Defence Department are trying to do.”

Johnston says that nuclear submarines would suit Australia’s needs better than diesel submarines, but that he has not spoken to anyone in the Defence Department or to anyone in government about his views. He said the submarines shouldn’t be built in Australia, a view at odds with fellow signatory Dick Smith’s longtime commitment to Australian manufacturing.

Johnston says that he and Smith have been discussing the issue for some time, but decided not to run an advert during the election campaign as they didn’t want to derail the news agenda. Asked what the next step from here would be, Johnston says he hopes the media will follow the story: “I’d like to think that some highly motivated journalist would write a book about it.”

It’s not the first time Johnston has taken to the media to get his views out, using a full-page ad in The Australian in 2006 to call for people to increase the birth rate. 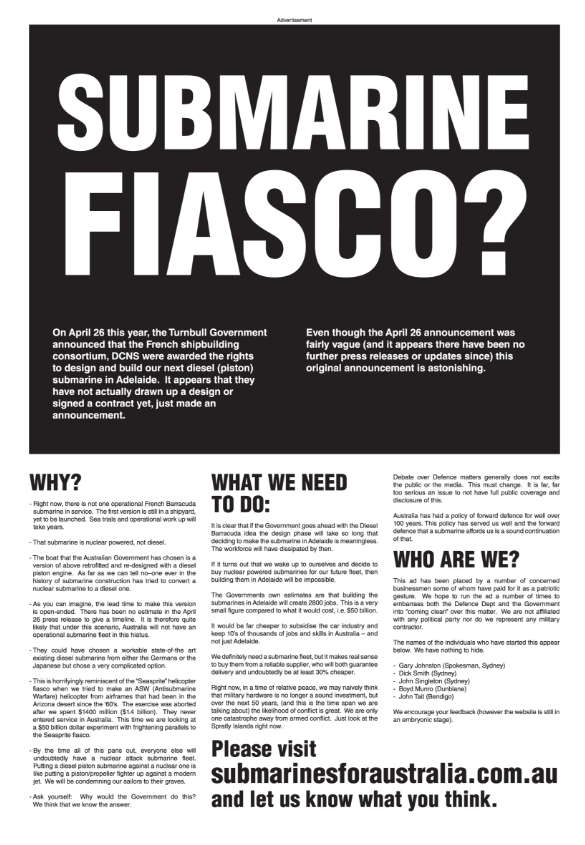 Keane is wrong: we should build subs in Australia

The curious case of the missing French nukes

It doesn’t cost the Commonwealth, it costs us taxpayers.
Their premise makes sense to me, I don’t see that the defence force are any smarter than these blokes.