Want to get taxes down? Who ya gonna call?!

Peter Costello wants someone to get taxes down -- unlike he managed. We have just the treasurer in mind.

Former Liberal Treasurer Peter Costello, in a blast at the Turnbull government on Friday, demanded that the government “smash the high-tax cheer squad”. “The Liberal Party is supposed to be the custodian of small government and low tax,” Costello lamented. While Costello’s acknowledgement that the current government is a big-taxing, big-spending outfit is welcome, it’s more than a little hypocritical given Peter Costello’s performance as the biggest-taxing treasurer of the modern era (check the budget papers, which go back to 1970).

If Costello wants a treasurer who will “smash the high-tax cheer squad”, we have a candidate he should consider… one Wayne Swan. 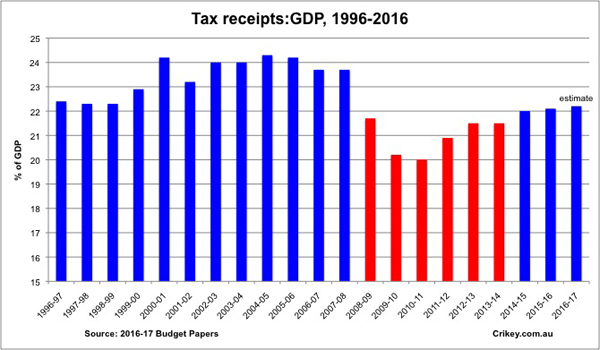 Treasury forecasts: are they worth the budget paper they’re printed on?

It’s hardly news that what Liberal politicians say & what they actually do/have done are frequently unrelated.
Costello is also famous for flogging off the majority of our gold bullion reserves cheaply although this is never mentioned when Liberal governments boast of the national account when they left office in 2007. Apparently unrelated.

HA HA HA Peter “mediocre is his second name” Costello wrong once again, its the story of his life !!!
And to be seen as a worse Treasurer than Swan would cut the useless fool to the core

So true Susan. It would cut him no end.

How does this graph look taking it back to the 70’s?

Peter “The Incontinent” Costello?
The micturating-on-demand Treasurer – who pissed the mining boom up the wall of political expediency, under the steady hand of Honest John Howard?

Indeed Klewso. Costello’s chief quality was inordinate luck in coming after Keating had fixed so many things so he couldn’t bugger them up, and then having money fall into his lap budget after budget. We are still paying for his stupidity.

All tip, no iceberg.

All piss and wind.

Far too generous, Klewso. More the randomly fluttering sphincter that ultimately let everything sluice by with a gormless grin…

Surely not even the Smirk hissownself believes that he was a Treasurer’s boot scrapings?