Turnbull tips both Cats and Hawks

The Age just made Turnbull's tips up, says the Fin.

Every week during footy season, both of Melbourne’s papers ask a bunch of sporting figures and other personalities, including the leaders of the federal Liberal and Labor parties, who they think will win that round’s matches. But careful readers will have noticed a disparity in Malcolm Turnbull’s answers last Thursday.

In The Age, he tips Geelong to win by 18 points. At the Herald Sun, his money’s on Hawthorn. 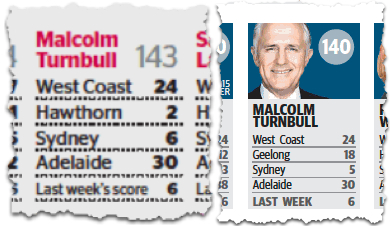 Is Turnbull just having a bet both ways? One wouldn’t expect much from Turnbull on the topic, given he once called the Roosters his favourite AFL team. But the fault lies with Fairfax, according to today’s Fin, in which Rear Window scribe Joe Aston says The Age just made Turnbull’s tips up:

“Turns out the Prime Minister’s Office didn’t get his prediction to Media House by deadline, so our sibling masthead just made it up — apparently common practice in the fast and loose world of celebrity prophecy. Who knew.”

We didn’t, though perhaps Turnbull should be making it more widely known. He’s coming behind Bill Shorten by one point on the Age’s tally — a tip sheet like he gave the Herald Sun (where he correctly tipped Geelong) would have brought him level with his Labor competitor.

It appears to not be the first time the two papers have diverged on just who Turnbull is backing. In fact, both leaders are on different total season scores — Turnbull on 143 and 140 in the Age and Herald Sun respectively, and Shorten on 144 and 142. — Myriam Robin