An Australian anti-same-sex marriage group is getting help on its campaign from a company with close ties to the US National Organisation for Marriage.

The mysterious and highly secretive Marriage Alliance is receiving help on its anti-marriage equality campaign from people with close ties to the National Organization for Marriage in the United States.

Marriage Alliance was a group set up last year to make arguments against marriage equality. The group does not often respond to media requests about it or its backers, but it has strong ties to the Liberal Party.

The group’s campaigning efforts have mostly been confined to bizarre social media posts and a bit of letterboxing during the election campaign with the help of the Australian Christian Lobby.

As Parliament looks set to debate the possibility of a plebiscite in the coming weeks, Marriage Alliance is ramping up its efforts, launching a petition last week for Opposition Leader Bill Shorten to allow the plebiscite to happen.

The new-look website that came with the petition states it was created by OPUSfidelis, a US communications and marketing agency, and has links under myop.us, the link-shortener used by OPUSfidelis. 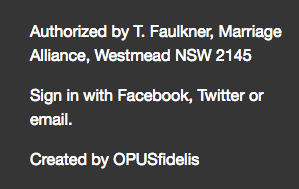 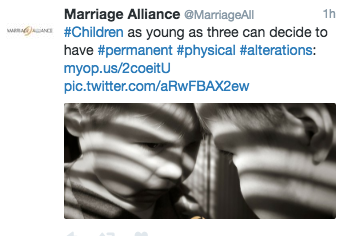 This Catholic-aligned organisation promotes its work getting Duck Dynasty (a US television show about a family of duck hunters) back on TV after one of the hosts made homophobic remarks in 2013. It also claims success for backing a support day for Chick-fil-A, after the fast food giant’s CEO made a series of comments opposing same-sex marriage, prompting a public backlash in 2012.

But the group’s biggest link is with the National Organization for Marriage (NOM), the largest US anti-gay lobby group, which failed in its attempt to prevent marriage equality becoming a reality across the US. OPUSfidelis ran NOM’s social media, including Facebook and Twitter accounts and blogs as far back as 2011.

OPUSfidelis then began working for a public referendum on same-sex marriage in France in 2013, in what was deemed to be the start of a new push by NOM to go global as the “International Organization for Marriage”. This new global focus was an attempt to join anti-gay marriage forces around the world, according to NOM.

“We’re working with everyone that we can that believes that marriage is the union of a man and a woman all around the world,” NOM president Brian Brown told BuzzFeed last year.

When it was in the planning stages, NOM stated it was “investing resources in exploring the legal and technological infrastructures needed to export NOM’s successful model to other countries”. But it also said that all money for the expansion would likely have to come from international donors, with US money to remain fully committed to domestic issues.

The man heading up OPUSfidelis, David Lejeune, was revealed to be CEO and executive director of the new International Organization for Marriage last year. This means that Marriage Alliance’s website is being hosted by a marketing organisation headed up by the CEO of NOM’s international arm to fight against marriage equality outside the United States.

Lejeune is also coming to Australia to speak at the Australian Catholic Marriage & Family Council’s “Renaissance of Marriage” conference in Sydney in late October on the topic of “taking marriage to the marketplace”. Liberal backbencher and World Congress of Families’ Natural Family Man of the Year 2014 Kevin Andrews will be speaking immediately before Lejeune on the topic of “social trends affecting marriage”.

We asked Marriage Alliance about its relationship with NOM and OPUSfidelis, and if the work was being provided on a pro bono basis, but we didn’t hear back.

The Australian Christian Lobby’s Lyle Shelton this week called on the government to allocate public funding for the Yes and No campaigns and to ban foreign donations, which he claimed “bought the vote” in Ireland’s referendum. The losing No campaign in Ireland was accused of taking money from NOM, something NOM denied, while publicly supporting the No side.

Is Opusfidelis related to Opus Dei?