ABS won’t tell us why they need to keep data. The Australian Bureau of Statistics has said that releasing internal discussions around questions put to the bureau on how it handles private data would undermine what it is telling the public.

Last month Crikey asked the ABS a set of questions about how census data had been handled in the past, in the wake of controversy over the decision to retain names and addresses from census forms for a longer period of time than in previous years. The ABS refused to answer the questions, providing a generic statement about the ABS’ data security policy. We filed a freedom of information request into how the media inquiry was handled, and in a response on Friday, almost all of the email chain dealing with the request was blacked out. 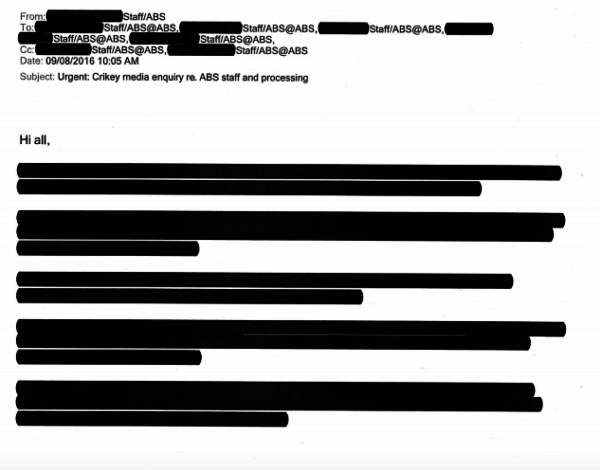 The text was blacked out because the Australian Bureau of Statistics claims it would be “contrary to the public interest” as it would “cause uncertainty” in the official statement that didn’t directly answer any of the questions we asked.

“Such an outcome could reasonably be expected to have a detrimental impact to the confidence placed in official statements and in turn impact the ability of the ABS to fulfil its legislated functions,” the ABS stated.

Amid the ongoing fallout over the ABS’ bungling of the census, the organisation has been reluctant to give full and detailed responses to questions on the census. The organisation is also now on the hunt for a new media manager.

Dr Assange to the OR stat.

WikiLeaks leader Julian Assange (and respected medical doctor — oh, wait) has found himself in hot water after posting a Twitter poll asking followers to vote on the possible reasons behind presidential candidate Hillary Clinton’s health issues over the past 24 hours. The WikiLeaks Twitter account posted the question “Hillary Clinton’s collapse on Saturday, prior coughing fits & unusual facial & body movements are best explained by:” with the options listed as “Allergies and personality”, “Parkinsons”, “MS”, “Head injury complications”. 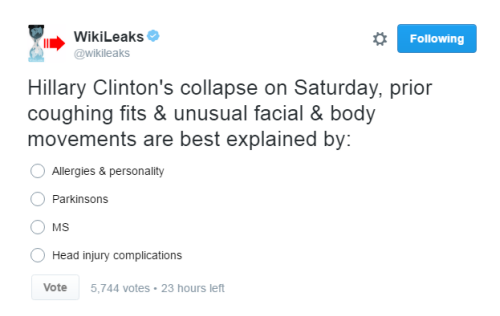 Clinton’s camp has confirmed that she is suffering from pneumonia after she was filmed losing her balance while leaving the memorial of the September 11 terrorist attacks. The Twitter poll has now been removed, with a second tweet saying “we removed our earlier poll on what people perceive are the reasons for Clinton’s medical issues as the possibilities are too speculative”. There was no apology for the original tweet.

Clinton has been a target of WikiLeaks since the organisation released cables in 2010 showing that Clinton had approved spying on foreign diplomats (a full history of Assange’s campaign against Clinton is here).

Assange’s war on Clinton has drawn considerable love from the alt-right and Trump supporters — including some who vilified WikiLeaks for releasing the Chelsea Manning cables. But Assange’s bizarre focus on Clinton’s fainting and the offensive poll left even longtime supporters dismayed at his lack of judgement. Assange has been threatening more leaks that he says will end with Clinton in jail.

Anyone willing to work for the census? Anyone? The Australian Bureau of Statistics is facing another crisis over its census bungling as it struggles to find willing staff to collect the outstanding census forms, which were due more than a month ago.

Last week, Crikey reported that field staff were being told to go back to residences even when residents had told ABS officers they had already sent off their census forms. Now, with just under two weeks left to collect census forms, the ABS is in full-blown panic mode, attempting to get more field staff to go out in the field to harass the remaining residents who have yet to fill in their forms, and could now potentially face prosecution and $180-per-day fines for non-compliance.

Field staff — who are also being ordered by the ABS to “not discuss their work with anyone” — were offered 40 hours’ worth of collection work each, but a lack of people willing to go harass the general public on behalf of the ABS meant that those hours were run through pretty quickly, and now those staff are being offered extra hours to make up the gap.

Field officers are also receiving offers to begin covering other areas of the country where other staff have rejected work in order to ensure everyone has been covered. It is estimated around 20% of forms are still to be collected.

The Greens’ Scott Ludlam, NXT Senator Nick Xenophon and independent Senator Jacqui Lambie are putting a motion to the Senate today to call on the ABS to ditch the fines for people who have refused to complete the census.

John Howard hearts Menzies. Former prime minister John Howard’s documentary on the life of his political hero Robert Menzies begins on the ABC this week, but for those who just can’t wait for the two-parter, there are more than a few options to get more Howard on Menzies in your life (yes that is the title). The Menzies Research Centre is hosting an “exclusive cinema preview” of the documentary at the State Library in Melbourne tonight, with a discussion and drinks with Howard himself to follow. At $50, it’s quite the price for something that will be on small screens in less than a week. Howard has filmed hours and hours of interviews with other former prime ministers and luminaries, and the uncut interviews are available to subscribers of The Australian here.

According to the ABC promo “Honest John” Howard is going to “set the record straight(?)” on Menzies?
This would be the political out-house “prevaricating rodent(?)” (even our Brand X A-G can be right once in a decade) behind :-
“Non-core promises”?
The “ministerial code of misconduct”?
The “Never ever GST”?
Joined Reith in plotting to take down Halverson – because of his impartiality?
Co-conspirator with Reith, again, re “Children Overboard”?
“Hicks, Habib and Haneef”?
“Let’s Invade Iraq Because ….”?
…. “Honest John Howard – the PM that could hide behind a pig’s tail.”?

The hyper-sensitive ABS has just given Australians a great idea ie: to black out our answers on the census form.

It appears the ABS is hellbent on demanding our information but most reluctant to give any itself.

Don’t be too worried about that Doctor title Crikey, MD’s aren’t actually doctors either. 🙂

I’m on board Klewso. Howard talking about anything is a complete waste of space. That turd of a party is much more a reflection of his ignoble character than anything Menzies had in mind.

So the ABS is claiming that it can’t tell you what it really does with our data as it would undermine the lies that it is telling us – is that it?