We could win gold in renewable energy, but the government cripples our chances

New research shows that Australians want the Senate to block cuts to renewable energy research and development. Researcher at The Australia Institute Tom Swann writes that the government is backing a loser in R&D funding.

Imagine Australia had just won gold and the government responded by abolishing the Australian Institute of Sport. It would be outrageous. Yet that’s what this government is trying to do in energy research and development.

For 30 years Australian governments have overwhelmingly focused their R&D funding on fossil fuels. We scored a podium finish for so many years it looked a bit obsessive, while on renewables we lagged at the bottom of the tally.

But in 2013, for one magical moment, it was it was gold for Australia.

It was too good to last. Now we’re reverting back to form. The government wants to cut R&D into energy from the sun, wind and waves, at the same time as providing millions in new R&D funding for oil, gas and hopes of “clean coal”.

Data from the International Energy Agency (IEA) shows Australia’s funding for energy research, development and deployment (RD&D) has gone overwhelmingly to fossil fuels. Fossil fuels received most of the funding in most years, and was the main recipient in nearly every year. 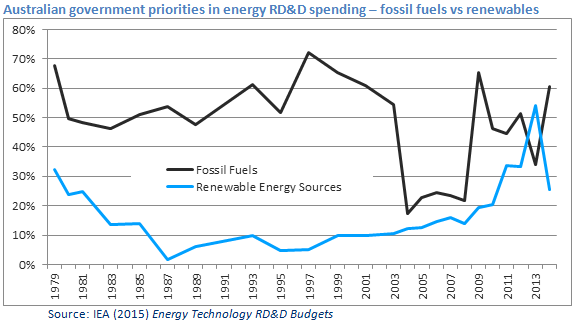 In the 1980s the focus was on coal, then we moved more to oil and gas. The dip in the 2000s is due to an increase in uncategorised “other”, no doubt also mostly to fossil fuels.

From 2009 there was a huge explosion in funding carbon capture and storage (CCS — sometimes called “clean coal”), with hundreds of millions spent every year.

At the time, the Australian Coal Association promised CCS would be working at commercial scale in Australia by 2015. We’re still waiting. In fact, there is still only one, hugely subsidised CCS plant storing power generation emissions anywhere in the world.

Australia’s support for fossil fuel RD&D has been so substantial for so many years, that if the IEA gave out medals, we’d have a Phelps-load. 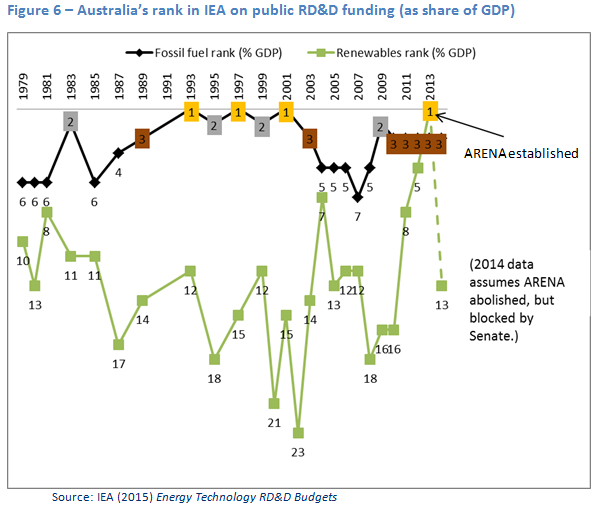 Australia’s fossil fuel funding (per GDP) put us first, second or third among the IEA members from 1989 to 2003, and second or third from 2009 onwards. Even on dollar terms we did pretty well.

By contrast, Australia was ranked towards the bottom of IEA member states for renewables RD&D for most years. We were outside the top ten throughout the 1983 to 2003 and again from 2005 to 2010.

Smaller programs saw us edge up from 2010 onwards. But establishing ARENA in 2013 put us first among the IEA for funding renewables RD&D, ranking funding as a share of GDP, and third in dollar terms.

ARENA supports energy R&D into new innovations and high impact projects. Everything from new solar to wave to bioenergy technology, batteries and microgrids, community energy and huge solar farms have received grant funding from ARENA, helping to push down costs and establish Australia’s position in this emerging industry. Just this week in just one announcement ARENA turned $92 million in funding into $1.1 billion worth of projects to triple Australia’s solar capacity.

The Abbott government tried to abolish ARENA in the infamous 2014 Budget, and the Senate rejected the idea. Despite all the talk of “innovation” the Turnbull government retains the Abbott policy — in all but name. They want to cut all of ARENA’s funding and have ARENA manage loans out of existing funds.

The Australian public think cutting ARENA’s funding is a pretty dumb idea. They want the Senate to reject it again.

A nation-wide Reachtel poll of 10,271 people, commissioned by The Australia Institute found 56% of respondents said the Senate should block the cuts to ARENA, and only 21% said they should let them through.

Already in 2016 the government has announced:

And this all ignores funding to fossil fuels provided through the R&D tax breaks.

The R&D you fund shows the kind of future you want. Current government policy risks sending Australia back to an energy research policy from the 1980s and 90s. This is not what the public wants and it is not in the nation’s interests.

The Senate should save ARENA. It’s is our renewables innovation gold medal winner.

Did Labor really save public servants?

The LNP is a lack lustre bunch of back in the 50s guys. Turnbull was spitting the word, innovation out is mouth in a hurry pre DD. Innovation though is fundamentally heresy to rusted on LNP voters. Haven’t heard much about innovation since DD or even a policy, platform, or future. This government has no navigator and Turnbull as skipper is likely to do a drive by of an island and sink the good ship Australia.