ABS won’t tell us why they need to keep data

The ABS can't release information about its say-nothing response to a media inquiry.

The Australian Bureau of Statistics has said that release of internal discussions around questions put to the bureau on how it handles private data would undermine what it is telling the public.

Last month Crikey asked the ABS a set of questions about how census data had been handled in the past, in the wake of controversy over the decision to retain names and addresses from census forms for a longer period of time than in previous years. The ABS refused to answer the questions, providing a generic statement about the ABS’ data security policy. We filed a freedom of information request into how the media inquiry was handled, and in a response today, almost all of the email chain dealing with the request was blacked out. 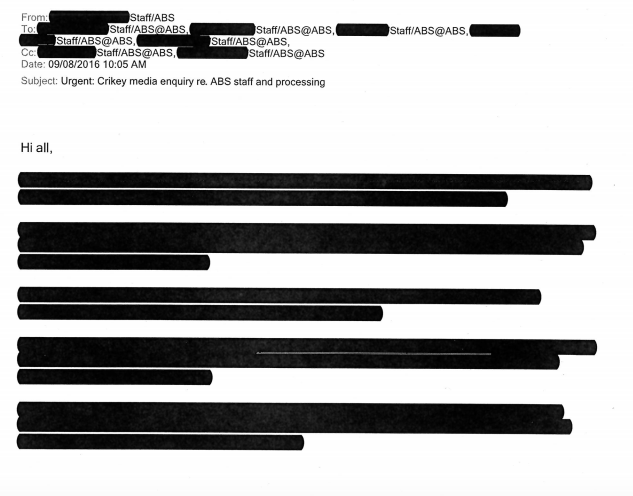 The text was blacked out because the Australian Bureau of Statistics claims it would be “contrary to the public interest” as it would “cause uncertainty” in the official statement that didn’t directly answer any of the questions we asked.

“Such an outcome could reasonably be expected to have a detrimental impact to the confidence placed in official statements and in turn impact the ability of the ABS to fulfil its legislated functions,” the ABS stated.

Amid the ongoing fallout over the ABS’ bungling of the census, the organisation has been reluctant to give full and detailed responses to questions on the census. The organisation is also now on the hunt for a new media manager.

This is appalling. Consider my confidence in the ABS now officially at zero.