From now on, for me, the first session of the 45th Parliament will be remembered as Hemingway on the Hill: for whom the bell tolls.

The division bells rang, the green lights flashed incessantly on the plethora of corridor clocks, and 10 lazy Libs (including several ministers) were exposed as laggards — more focused on getting an early start to a 10-day break from Canberra than protecting their vulnerable leader from a humiliating string of defeats on the floor of the House.

That amazing photo of Malcolm in a muddle, walking alone through the sea of green leather in an empty chamber, will surely win a Walkley.

The classic pic could not have been taken in the Senate, but that’s another story — and I’ll win that one despite the backseat lecture from Stephen Conroy.

It succinctly illustrates my campaign to allow the media the same photographic rights in the Senate as they have in the lower house.

That embarrassing shot of yours truly grabbing some first-day shuteye during the GG’s bum-numbing speech at the opening of Parliament — which even made it into The Washington Post — could not have been taken on day two of the parliamentary session.

There was a dispensation for day one.

The later pic of Conroy and moi, which appeared in the Strewth column in the Oz several days later, cleverly makes my point.

(To add to the irony, at that frozen pictorial moment, the shadow minister and I were discussing my plan to relax the Senate photo ban rules and bring them into line with the lower house.)

The Australian could not have legally run that photo — would have incurred the wrath of the Usher of the Black Rod — if they had edited out a bloke in front of us: Resources Minister Matthew Canavan.

You see, he had “the call”. And you can legally take pictures of a senator if he, or she, is on their feet. We were mere backdrop material. Noddyland, huh?

Paul Barry on Media Watch this week supported my campaign to drag this “august chamber” kicking and screaming into the 21st century, although it prompted my tweet: 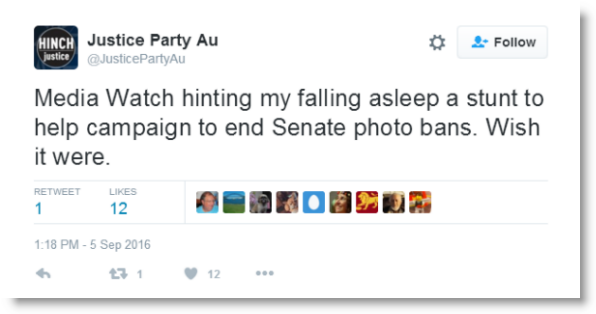 I have support from Senator Mitch Fifield from the Libs and most of the Labor senators. Conroy’s resistance, he says, is based on a fear that, in the “more intimate” Senate chamber, powerful camera lenses could pick up details from confidential documents on senators’ desks. I’m told restrictions on such intrusions already apply in the House of Reps. And that’s fair.

It seems a compromise is possible with still cameras permitted to photograph divisions and adjournment debates. Presumably to capture errant Libs dashing off for a long weekend. But that’s not good enough.

There’s also pressure to push the issue off to a committee. Presumably, similar to that committee (of which Leader of the Opposition in the Senate Penny Wong was a member) that green-lighted changes that never happened, in 2014.

And still on the Senate. Slippery Sam Dastyari. Or Shanghai Sam, as the Libs have dubbed him.

His transgressions have been well-documented, and he gets the Gong of the Month for saying “I made a mistake” more times in 25 minutes than a Kardashian changes outfits.

And a word of warning to Senator Hinch, even if non-drinker: never accept a bottle of wine with the name “Grange’ on the label. It never ends well.

I started this epistle with Hemingway, so let’s continue the literary bent.

“First, no qualms. Not the thinnest sliver of misgiving about the value of his work. He was as uninhibited as a performing seal. He never questioned his right to monopolize conversations or his ability to do it entertainingly. And then there was his colossal lack of perspective. This was one of his most valuable gifts, for perspective doesn’t always pay. It can slow you down.”

Or maybe Dastyari should drop in to the Sydney Opera House for the current season of My Fair Lady.

“Oozing charm from every pore, he oiled his way around the floor.”

*Back to Hemingway and those tolling bells. I can sympathise with fellow politicians (never thought I’d write those words, Mr Keane) who miss divisions. I wear a knee brace after a back-breaking heli-ride mountain accident several years ago. In one bell-ringing episode last week I made it back into the chamber with 44 seconds to spare. At least I didn’t have to fly back from Melbourne.

Hinch’s Senate Diary: the things you learn in ComCars (and Ubers)

You might go even further back, DH, and note that any man’s death (even Shanghai Sam’s?) diminishes you, because you are involved in mankind and, therefore, never send to know for whom the bell tolls…

How much is this political PR/advertising costing?

Yes, I will never read any of of DH’s writing.
Shame on Crikey for even hiring him. As if he needs another pulpit to preach from.

That wasn’t Hemingway Derr’, that was John Donne. And Of Mice and Men, that wasn’t John Steinbeck either, it was Robert Burns.

The photo-shop ‘cartoon’ replacement of FDotM was a waste of space (now to be filled occasionally by le Lievre) but this garbage is just offensive, to nose, tongue & mind.