Gaynetto exposed. Streets and its parent company Unilever are at it again, using an advertising company to make it seem like its new product is the result of a grassroots campaign, when in fact it is just a slick marketing campaign. In the past few days Streets has released the Golden Gaynetto, an ice cream that combines both a Golden Gaytime and a Cornetto, a follow-up to last year’s Golden Gaytime in a Tub, which was also promoted as an answer to a grassroots campaign. As Crikey reported at the time, it was anything but, with the instigators of the campaign employees of J Walter Thompson (JWT), a marketing company that has done campaigns for Unilever in the past.

The Facebook page from the Golden Gaytime in a Tub campaign no longer exists, but the Golden Gaytime page does, documenting the letter to advertising director Jesse James McIlroy (a former JWT employee now with Rabbit Content) confirming the new product. The new page lists four other former JWT employees and two other Rabbit Content employees as founders of the page. And many of our media outlets went along for the ride. News.com.au, Huffington Post, Mashable, Essential Kids and Pedestrian all reported the story as the company responding to an enthusiastic customer. Oddly, it was The Daily Mail that noted McElroy was an advertising director.

Apple has no core in Ireland. Overnight, Irish Prime Minister Enda Kenny told the Irish Parliament that Ireland didn’t want Apple to pay the small nation back taxes, as the European Commission has ordered. While some PMs would love the 13 billion euros the EC demanded Apple pay to Ireland, Kenny said the government would challenge the ruling because it did not do deals with big corporations.

Instead of paying Ireland’s 12.5% corporate tax rate, Apple pays tax at the rate of 0.05% (and actually, 0.005% in 2014), under a sweetheart deal with the Irish government struck in 1991, which is now the focus of the EC. Apple also rejects the deal and says it employs 6000 people in Ireland, mostly in the regional city of Cork. But for all the Irish largesse, Apple has not responded in kind — while it has the best part of US$200 billion on deposit in Irish banks and other accounts, it has not seen fit to open a single Apple store in Ireland.

There is one in Belfast and a further 64 in the UK, but the iPhone giant could not see its way clear to giving the Irish a fancy Apple store — even as a “thank you” to the country for such a big fat tax lurk. But you can buy Apple phones and other products from various resellers, including Australia’s own Harvey Norman, which has a chain of outlets across the country. Ireland has about 4.6 million people (by comparison, Sydney has roughly 5 million, and Apple has eight stores in Sydney alone).

Seven botches promo. Channel Seven’s Sunday Night is trying to come up with its own ratings gold out of the 60 Minutes Lebanon kidnapping saga, with an exclusive interview with Adam Whittington to talk about how the “child recovery expert” was abandoned by Nine in the aftermath of the botched kidnapping operation in Beirut. But Seven might need to check they’ve got the right man, using this image of Nine cameraman Ben Williamson in the promo uploaded to Sunday Night’s Twitter account earlier today:

The image has since been changed to one that is actually Whittington. The interview airs on Sunday and will cover the time Whittington spent in a Lebanese jail after Nine’s employees and the children’s mother, Sally Faulkner, had been released. Seven says Whittington has not been paid for the interview.

Sandwich press reappears. Just weeks after Crikey revealed that Paleo bros and non-Paleo bros (otherwise known as normal people) were locking horns over whether it was appropriate to cook steaks on the communal sandwich press in Fairfax’s Melbourne Media House headquarters, The Age home page served up this morsel, syndicated from the Huffington Post. 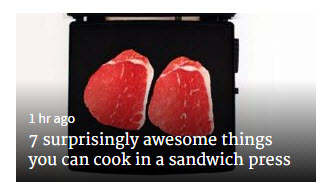 Yes, that’s a steak on a sandwich press. Apparently there’s no limits to what a sandwich press can do — cooking thinly cut steaks, grilling fish and halloumi — the Paleo bros will have so much inspiration.

Perhaps in a rare moment of self-awareness though, the article includes this warning:

“A word of caution, however — your fellow workmates will probably NOT want you to cook a fillet of smelly salmon or steak on the communal toastie maker.”

Last month The Australian’s Media Diary reported that Age journo Bhakthi Puvanenthiran had demanded a vegan sandwich press be supplied in the media outlet’s kitchen because she was a vegan. But Puvanenthiran isn’t a vegan; a request had been made for people to stop cooking raw meat on the communal sandwich press.

Now the Paleo bros (who we hear actually work for NBN Co, which leases a floor in Media House and share a kitchen with the newspaper) have been given more ideas on how to use the sandwich press, by people within The Age HQ.

What ever happened to Joe Bullock? Where is the Labor senator from Western Australia who quit less than halfway through his term because the party was keen on removing discrimination? Joe Bullock, a lifetime Labor man, quit from the in March because he was “shocked, alone, and in deep despond” because at national conference last year, the party voted to bind its elected politicians from 2019 to vote in favour of marriage equality.

It is no surprise, then, that he has found an adoring crowd in the Australian Christian Lobby, speaking at the group’s events this week. ACL managing director Lyle Shelton tweeted that Bullock was “the best of Labor”.

Bullock, who never achieved much of note in his short time in Parliament, will be quickly forgotten as the woman he replaced — Louise Pratt — returns to Parliament, and the man who replaced him — Pat Dodson — gets down to business.

Guess who? US presidential candidate Hillary Clinton has tapped former prime minister Julia Gillard to talk her up in her latest campaign advertisement, the only international voice in a five-minute clip that focuses on Clinton’s experience. 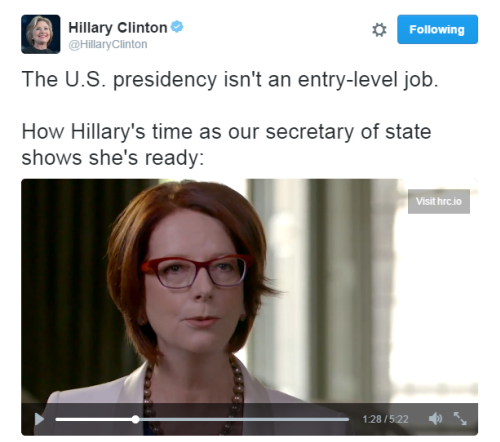