The picture has been pixelated online, but the uncensored version continues to be shown in social media previews of the article.

In an article titled “Have we hit peak nudity on the red carpet?”, The Age inadvertently published a photo of, well, nudity. The article, by Jenna Clark, reported on the outfits of two models at the Venice Film Festival, whose flowy gowns allowed for a revealing look at what is usually left under the fabric. The image was originally uploaded without any pixelation of the models, and it still shows up in previews of the article on social media. This is how it appears online now, and the unedited preview can be seen here (not safe for work, obviously). 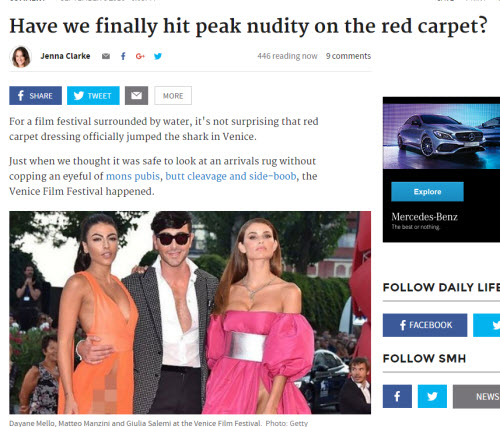 Tips and rumours: No photos!

How will the government learn the one weird trick to reduce belly fat?

Mary had a little skirt
With slits right up the sides …