The Labor Senator's connections to Chinese businesses go back years, but that still doesn't explain the bill they paid for him.

Senator Sam Dastyari has admitted that he made a “mistake” in asking a Chinese company to pay a personal debt for him, but he has avoided answering why he asked the company in the first place.

In a long press conference in which Dastyari promised he would speak for as long as required, and with many questions from the ABC’s Leigh Sales, the Labor Senator said his position on the South China Sea was not influenced by the payment from the Top Education Institute. He continually side-stepped questions about why he had asked the company to pay the sum of $1670 for an overspend on his travel budget last year.

“Top Education is a firm that I knew in Sydney, from the Chinese Sydney community. It would have been inappropriate, regardless of who I had asked,” Dastyari said. “Be it a trade union, the Labor Party, the issue was not the company, the inappropriate action was I should have made that payment myself.”

This is the closest the Senator got to explaining why he asked the company to cover the expense: “I asked company to pay the bill because I did not stop to think. I should have. And I did not.”

After refusing to answer why he had asked Top Education to pay the bill, Dastyari called the presser closed after 25 minutes, saying “we are going around in circles”.

Dastyari also refused to assuage concerns that the payment influenced his statements on the South China Sea dispute.

So how did we get here? Dastyari’s connections to Chinese companies with links to the Chinese government go back years, but that does not answer why he did not “stop to think”. Here’s a potted history of Dasher’s Chinese connections.

Dastyari was sued by Diversified Communications, an advertising and marketing company, in a case that began in 2013 when he was still the general secretary of the NSW Labor Party. The advertising company sued Dastyari for $40,000 over a promised ethnic media advertising campaign for the 2013 election, which was scrapped after Kevin Rudd returned as PM. The case was lodged in July 2014 and settled about three months later, but the Yuhu Group settled the bill. Yuhu Group is a property developer the ABC describes as “a subsidiary of a state-linked operation based in China”.

The company’s chairman, Huang Xiangmo, was profiled in the AFR last week and labelled “arguably the reigning emperor of the Chinese community in Australia”.

Also in 2014, Dastyari hosted an afternoon tea at Parliament House paid for by the Australia China Relations Institute, of which Xiangmo Huang is a co-founder and former NSW Premier Bob Carr is a director.

Dastyari traveled to China courtesy of the Australian Fellowship of China Guangdong Associations Incorporated. His interests register says the two-week trip “was supported by Chinese People’s Institute of Foreign Affairs and included site visits in Shenzen at the offices of Yuhu Group Pty Ltd and Huawei Pty Ltd coordinated by those organisations”.

The declaration that started it all. Dastyari declares “Support for settlement of electorate staff travel budget overspend paid by Top Education Institute”. 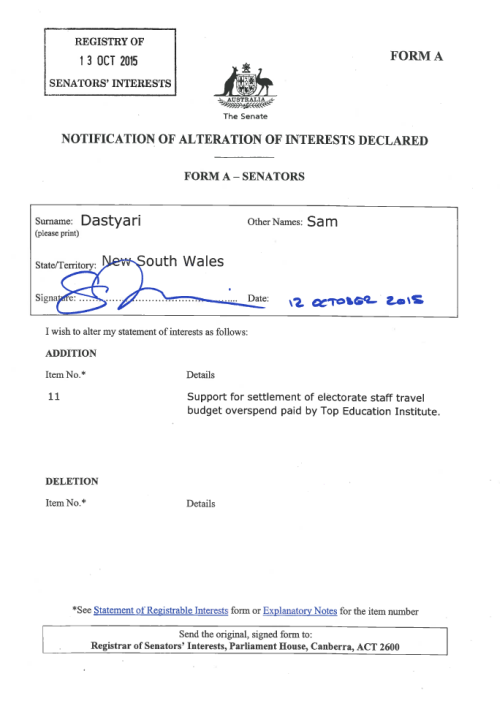 Dastyari traveled to China, with flights and accommodation again paid for by the Australian Guangdong Chamber of Commerce. The declaration says “the trip was supported by the International Department of Communist Party of China”.

Dastyari held two press conferences during the election campaign with local Chinese-language media, during which he was quoted in Chinese language website Qld Today on June 16 saying: “The South China Sea is China’s own affair. On this issue Australia should remain neutral and respect China’s decision.” He was standing next to political donor Huang Xiangmo, who has reportedly complained about the results of donations to Australian MPs. Remember, Xiangmo is the founder of Yuhu Group, which paid Dastyari’s legal bill in 2014.

Senator Cory Bernardi called for Dastyari to explain why Top Education Institute made the payment.

Dastyari told the Senate he made a mistake and would pay the money to charity. The education charity returned the money because it did not want to be “compromised”.

The quotes were reported in the Australian Financial Review, leading to the mess Dastyari now finds himself in.

Yesterday’s press conference was “a train wreck right on time,” according to James Jeffrey.

Five pieces of government business that are actually about Sam Dastyari

Ask all political party’s about donations or ask none. This has echoes of the famous Gillard presser, dumb journalists run out of questions, headlines the next day… Questions need answering… Lazy reporting of an issue that has the stink of a setup.

Precisely.
The whole lopsided handling of this issue by the media, Crikey included, provides a stark illustration of its deliberate failure to properly inform the public.

Excellent point – whether simply inept or deliberate, I am fascinated by the constant misrepresentations depending on political agendas.
The last thing the torys want is to lessen the options for finance but to lose them because of this piss weak matter would really be foot shooting.

Agreed Alan…the media in this country need to get a life.
And all this over a few thousand dollars? Why don’t you in the media all start the same forensic examination of Senator Seenodonars?
All very biased…must be the Labor Party’s fault…again!!

A week from show to go?
But, given their attention spans, how are the denizens of our media goldfish bowl handling this? A “sign of Shorten’s lack of leadership”, and “Datyari’s fitness” for public office?
So how long did it take Turnbull to dump Brough, Robert or Briggs?
(Or Abbott to move on Bishop or Sinodinos; Howard, kicking and screaming, in obdurate pouting, to actually implement his ‘Ministerial Code of Conduct’ gimmick, on the school of his recalcitrants?)
And contrast that media’s deference to Turnbull (or Howard even better : Abbott’s a “lay-down bizzare”) against their treatment of Shorten?

And yet the Parakeelia rort is just fine and dandy…

Seriously, the media are whining about the Chinese as if we are in a 1950’s cold war against them. There are lot’s of Chinese people, about 1 in 5 of the global population is Chinese, it would be very hard not to know any of them don’t you think.

All this beat up bullshit is just ridiculous, the money was legally accepted and declared.

Yes, I was just wondering if this would have caused the same sort of “outrage” if the donation had come from Shell Oil or Apple?

Or an Australian miner buying influence?

…. And hasn’t this declaration lain dormant (for almost a year?) til this week – a few days after last Thursday’s embarrassing debacle for Turnbott’s Limited News Party, being pantsed in parliament?

My mistake – it was indeed the other way around – hence Labor having to use what they probably hoped they could save til later in the cycle (pantsing the government) – to draw attention away from Dastyari’s cock-up.

Wow, a whole MJShepherd post without a mention of refugee abuse.
Is this a record?

Tomorrow’s breathless interview question for Dastyari:
“How do you feel now that you’ve stood down?”.
And the wankers in the media probably think that they’ve had a win.
Too many journalists, not enough journalism. Pathetic.

To me, once upon a time “news” was a public service – a vehicle by which to keep society informed about what was going on – information on which society could form it’s own opinions.
Nowadays it’s commodified – it has to pay it’s way; a mobile bill-board for the presenter and/or owner/editor, on which to promote their personal politics (while editing out alternate opinion), blocking out selected parts of the whole picture, trying to convince others of the righteousness of their own elite viewsmedia convictions – trying to urge rubes to see things, and thence vote, their way?

What was that execrable phrase we read tuther day, apparently not written in horror, “snackable content”>