Parties like foreign donation laws just the way they are, thanks

There's little interest from either side of politics in banning foreign donations: they're worth millions to them.

The Coalition this week has had the challenge of attacking Labor Senator “Sinophile Sam” Dastyari for receiving donations from Chinese businesses while insisting foreign donations were perfectly OK. It’s been a manful struggle. Christopher Pyne contorted himself into knots trying to explain what exactly Dastyari had done wrong while trying to avoid acknowledging there might be any innate problems with getting donations from foreign sources; provincial lawyer George Brandis today declared foreign donations were “a different conversation” from the Dastyari case; Barnaby Joyce, displaying a remarkable ignorance of the Electoral Act, declared that gifts were different to “cold hard cash” (check the definition of gift under s.287, Barnaby).

In retrospect, that bill looks almost perverse in its lack of self-interest: Faulkner’s branch, NSW Labor, was at that time mainlining Hong Kong Chinese donations. In just 2007-08, for example, NSW Labor took $400,000 from Hong Kong and Macau gambling mogul Stanley Ho (though Ho only disclosed $200,000), $600,000 from Ho’s company Hungtat Worldwide, $100,000 from HK entrepreneur Anthony Chan, $50,000 from the later controversial Beijing Austchina and $250,000 from HK mogul and philanthropist Chau Chak Wing’s company Kingson. And Ho’s wife, Angela, tried to give the ALP federal branch half a million dollars, but had it returned to her.

So if Labor was willing to cut itself off from literally millions in foreign donations, why did the Coalition knock them back?

By that stage, the Coalition was starting to catch up with Labor on Hong Kong donations. A relative of Chau Chak Wing gave the Nationals $200,000 on the eve of the 2007 election while Kingson gave them another $250,000 as well as giving state Liberal branches (but not the federal branch) another $230,000; yet another Chau company gave the NSW Liberals another $200,000.

Chau’s most recent contributions, in 2013-14, split roughly evenly between both sides when you add up both Kingold and Kingson donations, which total many hundreds of thousands. The Liberals have since picked up donations from another Chinese entrepreneur, Chiu Tao, both directly and via his company CST Mining. Not that Labor has stood still: for example, in 2013-14 it secured a staggering $850,000 from Chinese property developer Zi Chun Wang.

But while the Coalition was lifting its game on Hong Kong donations, it already had a well-established source of foreign donations. British Tory grandee and tax exile Michael Ashcroft was a huge and serial donor to Liberals — so large as to make even the Chinese look cheap. 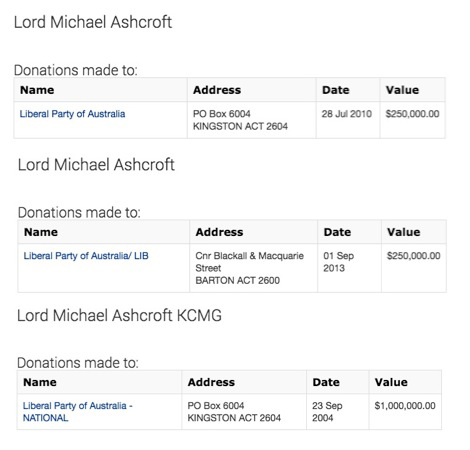 Despite the Coalition’s attempts to disentangle the issues, the attack on Dastyari is based on the notion that donations influence the behaviour of politicians, and that foreign donations represent a particularly noxious form of influence. Few countries allow them: the Germans, New Zealanders, Italians and Spanish do, although the Germans limit them to 1000 euros; otherwise, no developed countries allow them. But foreign donations are worth millions to both sides of politics, and the Coalition has access to foreign donors that Labor doesn’t have. No wonder they’re so reluctant to talk about joining the developed world in banning them.

Would you like some hypocrisy with that donations reform?

If donations are a sackable offence, here are eight more pollies who should have gone

I don’t understand why the parties keep this avenue open, as well as accepting donations from other dodgy sources such as big property developers. Yes you have the cash, but you’ll inevitably get caught up in conflict of interest scandals. Not worth it in the long run.

Not worth it to you and me maybe. But political parties have neither ethics nor morals and any money looks good to them. They just have to brazen it out for a few days and the fickle msm moves on to something else and all is forgotten until the next time. Then we suffer the pompous claims of the Pynes again until it fades …

Why is it that in all the discussion about foreign donors and their influence or otherwise on policy that the State of Israel never gets mentioned? There is a steady stream of Australian politicians to that small Middle Eastern State, including most recently our Foreign Minister who rather sickeningly invited Netanyahu to Australia saying what a warm welcome he would receive!
In return, Australia is one of a literal handful of nations, along with such giants as Nauru and the Marshall Islands, that votes in Israel’s favour in the UN. Where there is a quid, be assured there is a quo.

I had to laugh last week, when mini Mr Bean suddenly ceased to be his usual media tart self, and this was starting to be discussed that both Lady Macbeth & Frydenfraud oddly found a need to state, one might almost say apropo of SFA, that they’d been duchessed around the Occupied territories.
We even had a paean about the Golan Heights, surely the sorest point of all to Syria from her ladyship.

Who would have thought that the LNP might take an egregious position on these dodgy donations…they wouldn’t be hypocrisy specialists now would they?

Beat up. LNP get embarrased in parliment last week, put the heat on Labor this week.