Essential: who do you trust — and why Malcolm won’t disappoint us further

The Turnbull government is unlikely to further disappoint voters because it's already dashed hopes of better government. And who do you trust among our major institutions?

Australians have lost trust in major institutions and believe it’s more likely there will be an early election than not, according to this week’s Essential Report. 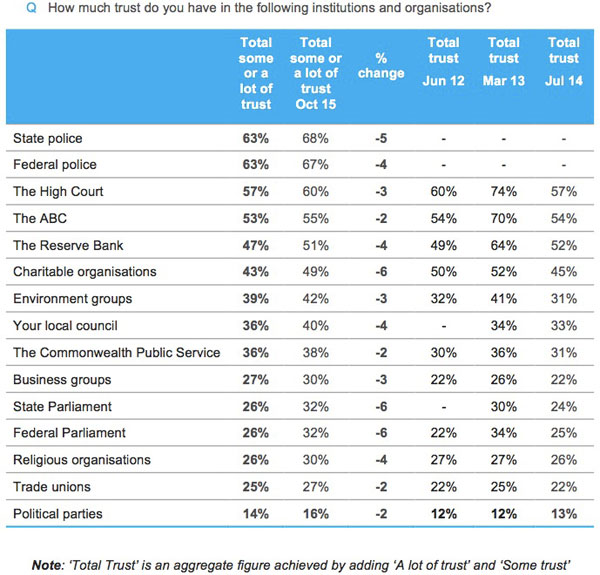 The High Court was down three points to 57%; the ABC down three points to 54%; and the Reserve Bank continues to fall in public trust, to 47%. Trust in charitable organisations has fallen six points to 43%. Business groups are at 27%, just ahead of federal and state parliaments; trust in religious organisations has fallen to just 26%, ahead of trade unions and political parties, which are easily the least trusted institutions.

While individual institutions can be affected by major events (federal Parliament, for example, appeared to be affected by the Craig Thomson scandal in 2012) trust in major institutions appears to ebb and flow as a whole, with all institutions (except the Reserve Bank) improving last year — in the wake of the Turnbull ascendancy — and then all falling this year.

Voters also have considerable faith in security agencies to protect their private information: 19% of voters have a lot and 32% have some trust in security agencies like ASIO and the AFP to store personal data safely. In comparison 46% of voters gave some or a lot of trust in the Australian Bureau of Statistics, while 49% have little or no trust in the ABS — about the same level of trust as banks. Public service departments fare more poorly — only 37% have some or a lot of trust in them to protect information, but that’s higher than telcos and ISPs, online shopping portals and social media companies.

Meantime, it seems there’s at least one area where Malcolm Turnbull needn’t feel any pressure: just 18% of voters expect his government will achieve more than the Abbott government, despite that government’s failure to achieve most of its goals. Thirty per cent believe he will achieve less, and 37% believe it will be no more or less effective. Needless to say, voting intention has a big effect on how optimistic voters are, but even 17% of Coalition voters think the Turnbull government will achieve less and 37% think no more or less will be achieved than the Abbott government.

And 26% of Liberal voters think the government won’t run a full term, along with 52% of Labor voters and 42% of Greens voters who think there’ll be an early election.

Essential did some more work on why some voters believe things are worse than 50 years ago, which proved disproportionately to be non-major party voters. There’s strong agreement from nearly everyone that we’re better informed about the world than we used to be, and that our standard of living, health services and quality of life are better. However, we’re less sure about our education system — while overall 50% of voters believe our education system is better than 50 years ago, 28% believe it’s poorer. Older voters in particular are not keen on the modern education system — 37% think it was better 50 years ago, and 43% think it’s better now.

But it’s job security and political leaders where nostalgia truly reins: 55% say job security is worse than it used to be, compared to 21% who say it’s better, with older voters in particular believing that, 68% to 13%. And 46% of voters believe political leaders were better back in the day, compared to 15% who believe the current crop are better, again with older voters viewing the past more positively.

On voting intention, the Coalition is down a point to 39% and the Labor is steady at 37%. The Greens are steady on 10%, NXT is on 3% and One Nation makes its Essential debut at 5%. Overall, Labor has increased to 52%-48% on a two-party preferred basis.

Talking about the AFP [trust level 63%, down 5% from last time] does anybody know what is happening with the Brough [and others ?] investigation?
Now that the election has gone and seeing as how its been 4 or so years since the events that caused the investigation, I sort of expected to hear that something is actually being done finally.

Amazing result.
Which state police were they asking about?
NSW? QLD? WA?

I think the question about “Do you expect Malcolm Turnball’s government to achieve more or less for the nation than the previous govt?” May be seen by many as a comparison to the Rudd/Gillard/Rudd Govt rather than Abbott. The ‘last govt’ is quite vague – last prime minister – last parliament – last cabinet refshuffle

Donald Kay
Yep.
I would have asked ER to specify exactly who they meant if they had asked me that question.
After all we have had the same government – same policies, same people pretty much -for the last 3 years almost just with a couple of different faces up front.

Almost 2/3 of our compatriots have high trust in the State & Federal police?!?
Come on in sheeple, it’s mutton time.