Bolt junior gets journo cadetship. Caleb Bond, the 17-year-old opinion writer for the News Corp tabloids who is the editorial love-child of Miranda Devine and Andrew Bolt, has been given a job as a journalism cadet, causing ructions in the newsrooms where he is supposed to be working.

Telum Media reports that Bond has started as a cadet for the Eastern Courier Messenger, which covers the eastern suburbs of Adelaide. The pubescent columnist has been writing opinion pieces for The Daily Telegraph and The Adelaide Advertiser and also regularly appears on 6PR radio in Perth, where he is known for his conservative views.

Crikey hears that Bond’s appointment has not gone down well at News Corp’s offices in Adelaide, with a staff meeting getting “kind of heated” over the decision to hire the columnist ahead of university graduates, former interns and casual employees. We hear the decision came from as high up as SA, WA, NT and Tasmania editorial director Melvin Mansell.

Newspapers used to take on cadets straight out of high school, but in recent times media organisations have been reluctant to hire even cadets with university degrees, and some with the title “cadet” have actually been working casually in the industry for years.

Bond’s editorials cover issues as broad as “Why don’t feminists fight Muslim sexism?” and “Being conservative doesn’t turn you into Satan“. We wonder how “Why local councils are a complete nonsense” will go down when he needs to turn up to the local mayor opening a public event. Bond does have a way with words, but how will he go when it comes to writing about where to avoid getting swooped by a magpie or the local footy results?

In an interview with Vice Australia last year, Bond was asked about his political aspirations, and he replied that he didn’t want to get caught up in the “dirty game”. “I’m not sure I’m cut out for toeing a party line either. I tend to have my own view and think it’s best. The idea of having to sing to someone else’s songbook doesn’t really appeal to me.”

If the more experienced journos at the Addy are worried about Bond’s shorthand skills, he told Vice: “I have a fascination with fountain pens. These days, with computers, you write less and less, so I firmly believe that when you do write it should be an experience, not a task. I often go to the various auctions around Adelaide to pick up fountain pens for a bargain. Not everyone’s cup of tea, but it amuses me. Parkers are my favorites but I’ve also been using a Jinhao X450 for quite a while. Some cheap Chinese thing for $5 on eBay. It’s superb value for money.”

Ring the bells. Always better to be early and prepared, but Infrastructure and Transport Minister Darren Chester is taking it to a new level, tweeting this today: 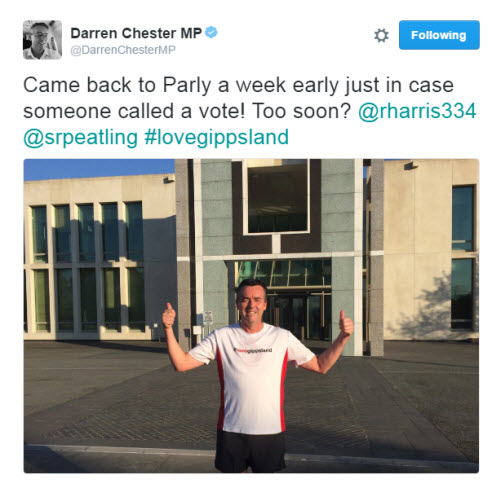 IPA starts them young. The Institute of Public Affairs is coming to indoctrinate your children with an “Open Minds Workshop”, which sounds like a slippery slope to who knows what! The flyer for the IPA’s workshop, to be held in Melbourne in October, says:

“The Institute of Public Affairs believes and understands that the distinct traditions of Western Civilisation should be an integral part of every young Australian’s education and formation.”

To that end, the think tank is running a workshop aimed at 15- and 16-year-olds, with three sessions covering Plato, the Magna Carta and the Declaration of Independence. Sounds like a great way to spend a Saturday. The freedom-loving teenagers will learn from two actual high school teachers, Susan Knopfelmacher and Richard Peterson, as well as the IPA’s John Roskam and Bella D’Abrera. The workshop is part of the IPA’s “Generation Liberty” program, which is “dedicated to advancing the ideas of liberty and freedom on Australian university campuses”:

“A non-partisan group which has no affiliation with any political party, Generation Liberty aims to provide students with a better understanding of how free markets and individual liberty can create social change by enabling human flourishing.

Generation Liberty seeks to connect students from all walks of life on university campuses and provide support for pro-liberty students and student organisations across Australia.”

Are young people ready for this? What will they do with such dangerous information?

Kevin Andrews, prodigal son. Former defence minister and one of the many self-appointed leaders of the conservative wing of the Liberal Party Kevin Andrews will return to his alma mater on Wednesday night to deliver the 36th Daniel Mannix Lecture, speaking on “Joseph Lyons and the management of diversity”. The Melbourne University lecture series, which invites prominent Australians to speak about “the art of public leadership in Australia”, was actually started by Andrews when he was a student living in residence at Newman College, the host of the event. So who was Andrews’ first call back in 1977? To none other than B.A. Santamaria, to speak on the topic of former Archbishop Daniel Mannix himself. What a way for Andrews to get in Santamaria’s good books. A tipster tells us that in that speech, Santamaria made the “nonsense” claim that Catholics faced living in ghettos over their faith:

“Unless Catholics were prepared to cut themselves adrift from their own traditional religious culture, and to confine their Catholicism to Sunday Mass and private prayer, they would have been doomed by inadequate education to remain the inhabitants of a poverty stricken ghetto. The most able would face the constant temptation to abjure their faith in order to ascend the ladder to temporal success.”

We’ll leave that claim and whether it is nonsense to our more learned colleagues. Andrews is also a member of the Newman College council. The speech has not always been a conservative Catholic love-in, with Peter Garrett, Waleed Aly and Julian Burnside on the illustrious list of former speakers. Perhaps next year the students should invite another one of Newman’s powerful alumni to speak on leadership — Peta Credlin. It would go a small way to correcting the major gender imbalance in speakers, and would keep the attendees awake for much longer than Andrews will tomorrow night.

Census fail notices. Received one of these? The ABS is telling people that their census forms are overdue and that they face a criminal conviction if they don’t fill out their forms. Though it’s hard to see how the agency could really prosecute anyone under the Census Act, considering how it was screwed up so royally: 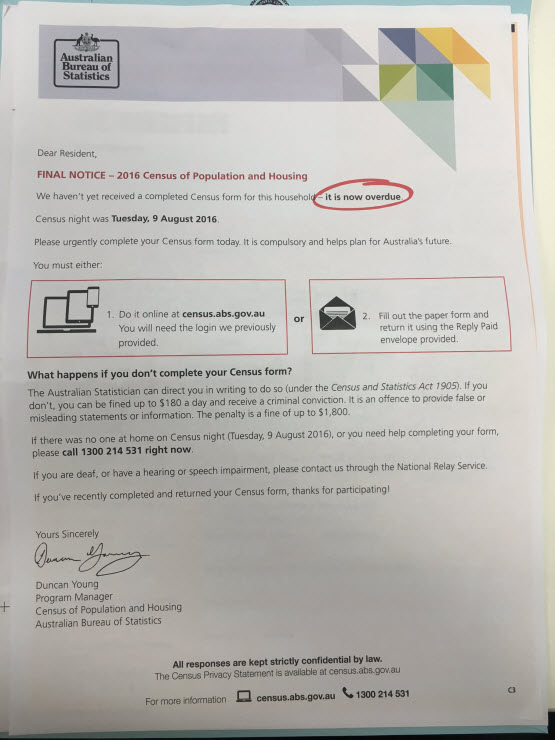 Crikey says: pollies muzzling the media for doing its job

Radicalisation – by the IPA?

Oh isn’t Caleb a wonderful little RWNJ. Do they wind him up? Or is he battery operated?