Andrew Bolt, unsurprisingly, is a yuuuuuuge fan of Ann Coulter.

Andrew Bolt’s Sky News program is fast becoming a platform for him to talk to all his favourite US conservatives. He’s already had the Twitter-banned Milo Yiannopoulos and P.J. O’Rourke, and last night secured an interview with Ann Coulter, one of the United States’ most high-profile conservatives. Coulter is a Trump supporter and promoting her new book on the property mogul.

For much of the interview Bolt pressed Coulter on whether Trump would change (he’s capable of listening to criticism because he read her tweets, she said) and why the media had downplayed Trump’s significance, but the conversation turned, as it always does, to how the media is always so mean to conservatives.

Coulter recently participated in a roast of West Wing and Parks and Recreation star Rob Lowe, and Coulter herself, as is often the case at these roasts, became the butt of many jokes, Comedian Jimmy Carr said: “Ann is one of the most repugnant, hateful, hatchet-face bitches alive. It’s not too late to change, Ann. You could kill yourself!”

Comedian Nikki Glaser: “Ann, you are awful. The only person you will ever make happy is the Mexican who digs your grave.”

Singer Jewel on Coulter: “I do want to say, as a feminist, that I can’t support everything that’s been said tonight. Bu t as someone who hates Ann Coulter, I’m delighted.”

Bolt took exception to this, but Coulter seemed not so fussed, saying she really didn’t mind but the jokes weren’t funny.

“Words are just words. I really don’t mind words. It’s gallant for you to be offended on my behalf,” Coulter told Bolt.

Bolt, on a crusade to remove the words “offend and insult” from Section 18C of the Racial Discrimination Act, persisted, telling Coulter: “You say words are just words, but there’s a meanness to them.”

And Bolt is not Coulter’s only fan … 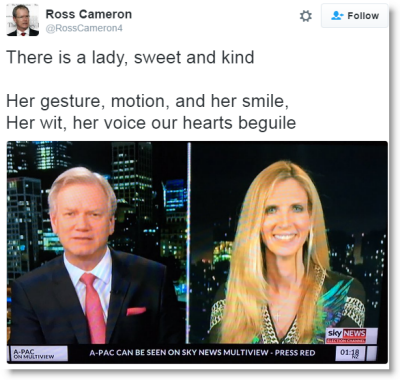 …the right-baiting gift that keeps on giving…ROFLMAO…t’is almost Spring, the surf is holding, Rupert’s tenured nutters are going all oozy & stalky & poemy over (totes reluctant & bemused) RWDB fiddle-fodder, live on Fox and on SM…the tinfoil loons are all eating themselves, limb by twitching, cankerous limb…chortle chortle chortle…

‘Tis a fine time to be alive and young.

Where you from Jack? Surf’s gone to shite here. It’s all spring time blues. You’re either in Queensland or a Victorian, methinks.

No no, Sydneysider Doggie…but mostly on a nice fat McCoy Big Boy Nugget at my age…I likes me sets small and domesticated these days. Have been popping down to a few reliable hideaways on the south coast (due family reasons) of late, there are lonely waves about if you’re patient.

You’d be one of them thar young ‘un aerial hotdoggers wot won’t get out of bed for anything under six foot, I’m thinking…?

Gee, granmamma, what a big Adam’s Apple you have.
Or should this comment be in MzRaz’s rant above?