Press Council splits over the publication of a domestic violence story. And other media tidbits of the day.

Press Council split on ‘abuse survivor’ story. The husband of a woman who told New Zealand Women’s Weekly that she had been abused has complained to the Press Council that the publication did not ask for his side of the story and that it published the first names of the couple’s children, thus identifying both them and him. Although most of the 11 members of the Press Council considering the matter upheld the complaint on those grounds, three of them agreed with NZWW that the importance of publishing the story of a woman who said her partner had abused her outweighed the need to get comment from both sides.

The complainant, identified as Mr Roderick, was not consulted before publication of the article accusing him of abusing his ex-partner, but the council was split as to whether that was acceptable:

“Three members of the Council disagree with the majority in connection with Principle one. These members agree with NZWW when it says the public interest overrode the requirement for balancing comment from the complainant to be published. They also note that the article (as opposed to NZWW’s comment on the complaint) does not endorse Ms Roderick’s account of the abuse.”

Roderick also said the magazine should not have published the names of his children, as that violated their privacy and identified him as the alleged perpetrator of the abuse (which he denies).

“The Council, unanimously, sees no basis for the magazine identifying the couple’s children. Principle three is clear. In cases involving young children ‘editors must demonstrate an exceptional degree of public interest to override the interests of the child or young person’. This is not one of the cases the Principle refers to. The purpose of this article could have been served just as well without the children having been identified.”

According to The Guardian, Clark was credited with the runaway success of the ABC’s digital offerings (the ABC has just become Australia’s most popular news website, surpassing both news.com.au and The Sydney Morning Herald‘s website.

“Clark’s digital strategy for transforming the public broadcaster was approved by the ABC board at its August meeting a week ago. The strategy details how the ABC can survive the disruption of digital media and break down the silos of radio, TV and online into one seamless service.

“But within days Clark had tendered her resignation, saying she wanted to pursue opportunities in the commercial sector. Guthrie has made no comment about Clark’s resignation.”

Foxtel in trouble? It’s not often you read such a stark admission in a News Corp newspaper (or on Sky News) about one of the Murdoch clan’s biggest assets. This time, it’s the half-owned pay-TV giant Foxtel. It’s the most profitable of News Corp’s Australian media interests, with revenue of more than US$2.4 billion and earnings of US$604 million on an earnings before interest, tax, depreciation and amortisation basis (the usual measure of media profitability) in the year to June. That was down from US$2.6 billion and US$760 million in the 2015 financial year. The 2016 figure was almost as much as News Corp made from all its businesses (US$685 million, down from US$945 million)

So it’s not struggling financially like News Corp’s Australian newspapers are, but it is under pressure from the rise of streaming video (Stan, Netflix, etc) and more competition. So it was odd to see in something very different in feature in The Weekend Australian on Foxtel’s CEO Peter Tonagh’s plans for the pay-TV operator. In the feature, senior writer Damon Kitney, left us with the strong impression that Foxtel is struggling. Without names being named in the story, fingers were pointed at previous managers/managements for Foxtel’s problems. But there was also what seems to outsiders to be an astoundingly improbable admission in the feature. In pointing out that Tonagh was recruited to Foxtel by then-CEO Kim Williams back in 2004 to be the chief operating officer, Kitney wrote:

“A decade later, he is still there, and has now been tasked with saving one of its most profitable but arguably most challenged businesses.”

Whoa, hold up right there — “saving” Foxtel? That is a pretty big admission, seeing no one knew it was in such trouble that it needed “saving”. But if that’s the case and Foxtel is in need of saving, the question has to be raised, why? — Glenn Dyer

TV Ratings. Nine’s night in the metros. Even though Seven had more viewers in Total People, Nine’s easy win in the main channels was notable. In the regions, Nine won total people but Seven won the main channels — the reverse of the metro outcome. Ten was nowhere in an interesting fade, again, on a Sunday night. Will it be repeated tonight? Viewing levels were down a touch. Father’s Day perhaps?

Seven’s The Big Music Quiz saw around 300,000 viewers drop out of last week’s promising debut. The national audience fell to a still solid 1.445 million from 1.762 million, but the metro audience fell sharply – down from 1.211 million to 930,000 last night. The Block averaged 1.522 million national viewers with 1.071 million of those in the metros. A solid performance.

Tonight it’s the ABC’s usual news and current affairs line up. It’s also theJust Desserts shown on Seven, The Block on Nine and Australian Survivor on Ten (which will be the most aptly named program on TV by the end of this season). I can’t see it returning in 2017 without a sudden rediscovery by Ten viewers in the next couple of weeks. –– Click here to read Glenn Dyer’s full TV ratings.

Front page of the day. Canada’s Prime Minister, already a hero to many progressives (and those with eyes and heartbeats), has become a bona fide superhero in Marvel’s new comic, Civil War II. 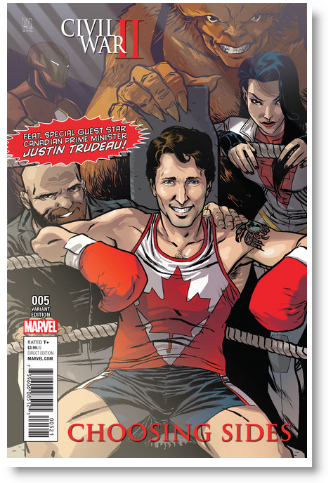