News Corp finds no evidence of Rothfield "compromised the integrity of his reporting", Michael Miller says. 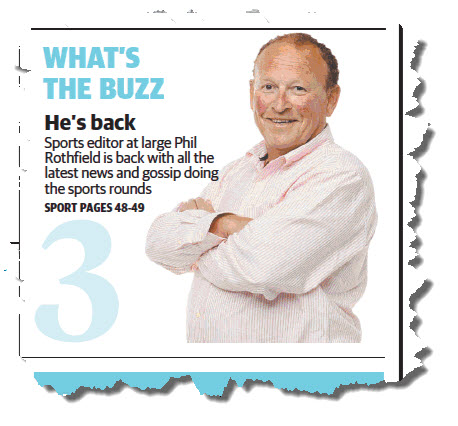 An internal News Corp investigation has cleared veteran sports hack Phil “Buzz” Rothfield of wrongdoing, five weeks after the Fairfax story that controversial gambler and former brothel owner Eddie Hayson had made payments to a TAB account held by Rothfield. A returned but chastened Rothfield said in his column on Sunday that he would no longer be punting with Hayson, acknowledging the relationship put “me and my editors in a difficult position”.

On July 29, Fairfax’s Nick McKenzie and Kate McClymont revealed the financial transactions, as well as the existence of text messages in which Hayson told those to whom he owed money that he would get Rothfield, the sports editor-at-large at the Tele, to write about them. Rothfield told Fairfax at the time that he had never allowed his friendship to influence his reporting. “I can’t protect Eddie, and I won’t,” he said. Some of the financial transactions were to purchase grand final tickets, for which Rothfield said Hayson had reimbursed him (as reported in Fairfax some weeks ago). Others were betting winnings. “I’ve known him for 10 years, and we are mates, and mates always have a punt together,” Rothfield said.

The bombshell triggered an internal investigation into the senior journo at News Corp, which has now concluded. Rothfield’s “What’s the Buzz” column ran in the Sunday Tele yesterday. An email to all staff on Sunday morning from the very top of News Corp’s Australian organisation told the troops what had transpired. The investigation into Rothfield, News Corp executive chairman Michael Miller wrote, examined everything he had published in News Corp in 10 years, with Rothfield making available his betting account records and otherwise co-operating with the investigation:

“But as I said when we announced this inquiry we should remind ourselves that our conduct policies are in place to protect our journalists and are a part of our commitment to great reporting.

“Phil will be resuming his columns for The Sunday Telegraph and The Daily Telegraph.”

As for Rothfield himself, he explained his month-long absence to his readers by saying his employer had asked him to step aside while they “investigated my association with controversial punter Eddie Hayson”:

“The investigation found my journalism and reporting has not been compromised by my relationship with Eddie and I did not receive gifts from him.

“However I accept that Eddie is a controversial figure and any perception that the relationship between he and I was closer than one of reporter and contact has put me and my editors in a difficult position.

“I will no longer be punting with Eddie Hayson. The episode has taken a toll on my health and I am making it my number one priority to get well again.”

Hayson has often featured in Rothfield’s writing, without a disclosure that the two were “mates who punted together”. But Fairfax said he hadn’t revealed the relationship to his editors — in seeming violation of News Corp’s editorial code of conduct. Miller appeared to acknowledge this in his email to staff, writing that “our conduct policies are in place to protect our journalists and are a part of our commitment to great reporting”.

The repeated mentions of Hayson in Rothfield’s writing didn’t do much for perceptions when the scandal broke, nor did a feature written by Rothfield and published in early August with the NRL’s Kieran Foran, in which Foran was driven to the interview by Hayson and quoted by Rothfield calling Hayson a top bloke. One presumes Rothfield will be far more circumspect in writing about Hayson from now on.

” “I’ve known him for 10 years, and we are mates, and mates always have a [unintelligible] together,” Rothfield said…”

At this point the Internal News Corps Investigation made its excuses and left.

This whole affair could well see a change of culture at News Corpse because up until now most of the folk there thought “Integrity” was a deodorant .