Read Fairfax for the scoop … and the spin

Fairfax is taking in lots of money from the Chinese government -- but it claims its China coverage is fair and balanced. Glenn Dyer and Myriam Robin report.

The irony is delicious. There on page 1 of this morning’s Australian Financial Review is an exclusive interview (and the first in English) with Huang Xiangmo, a powerful Chinese property developer and political donor, at a time when political donations are very much in the news. The story continued on pages 36, and on page 37, there was a feature on how China is influencing local debate through “a network of students and community groups”.

But, hang on, what’s this on pages 34 and 35 of the AFR this morning? Why a two-page spread (advertisement, as properly labelled) called “China Watch” from the Communist Party’s mouthpiece, China Daily? The two pages contained soft stories about the G20 summit this weekend and backgrounder on the city where it is being held — Hangzhou, the capital of Zhejiang province. Some of the headlines on the stories provided by those folk at China Daily were “Paradise blessed with immortal love stories” and “The city where ideas and businesses bloom”. And the main article was headlined “G20 Summit spawns great expectations”. 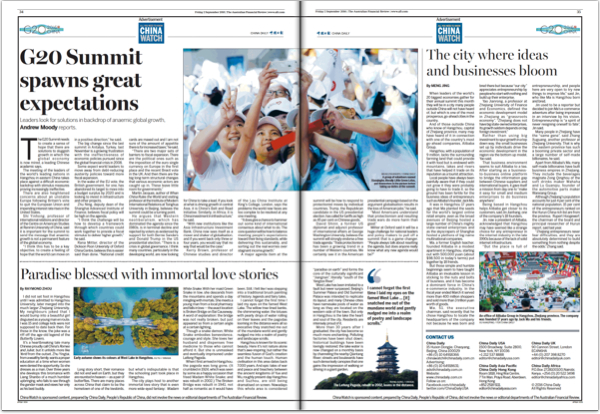 So the journalists at the AFR and other Fairfax papers are going on about China’s use of soft power and agents of influence, and then at the same time their paper is running ads masquerading as “news” from a Communist Party mouthpiece. Crikey pushes Fairfax on this from time to time, and the line is always that the ads don’t affect editorial coverage. The fact that Fairfax is leading the coverage on Chinese donors is thus reassuring. But then again, we’re sure Sam Dastyari and others have similar arguments about accepting financial favours from donors.

Also in the Fairfax papers over the weekend were exclusive stories from Adele Ferguson and Sarah Danckert on further 7-Eleven employee exploitation being investigated by the Fair Work Ombudsman. Which is presumably what led 7-Eleven to take out full-page ads in the SMH and The Age on Tuesday. The ads were a letter from CEO Angus McKay and explicitly criticised Fairfax’s reporting.

“Claimants and potential claimants should not be discouraged from pursuing claims as a result of reports published over the weekend in Fairfax Media, which contained a number of, in our view, inaccurate comments and inferences about the repayment program.”

Crikey’s sources say the ads haven’t gone down well in the newsroom. 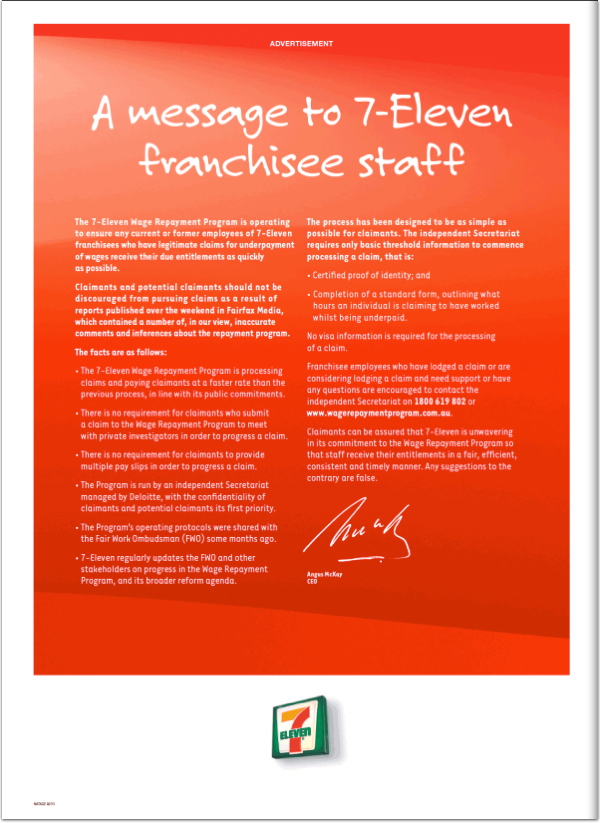