Former Prime Minister Kevin Rudd proves that his feline pet is the real boss of his household, and maybe the world.

Just how well is former prime minister Kevin Rudd taking the thwarting of his dreams to become the Secretary-General of the United Nations? By the look of his Instagram account, he is plotting some kind of feline take over of the world, led by one of his cat masters, Mei Mei. Rudd uploaded the photo of Mei Mei yesterday with the caption “So it turns out Mei Mei’s field of expertise is international relations theory” with the hashtags “#futureUN” and  “#ghostwriter”. The photo also gives an insight into the Turtle Bay Gardens, which Rudd has access to as part of his plush pad in New York. He shares the gardens with composer Stephen Sondheim and Olivier Sarkozy (brother of former French president Nicolas Sarkozy), who is married to Mary-Kate Olsen. Mei Mei is among powerful company while she plans the glorious feline revolution. 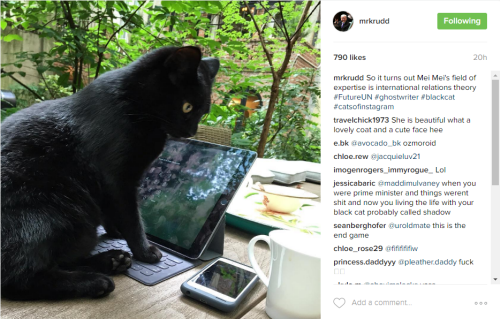