About last night: how Turnbull lost control of Parliament

How on earth did Labor seize control of Parliament? It all comes down to the very human desire to knock off early on the last day before a long weekend.

During Bronwyn Bishop’s controversial high-flying tenure as speaker in the 44th Parliament, there was a long-running joke that Labor MPs would be as disruptive as possible in question time on Thursdays in order for the 94a-trigger-happy member for Mackellar to kick them out and let them catch an early flight home.

That won’t be happening in the 45th Parliament.

The first signs of Labor’s more disciplined approach to parliamentary proceedings came earlier this week, when Labor MPs were ordered by manager of opposition business Tony Burke not to use their phones or tablets during question time and go in with their their “game faces” on.

This, in addition to Labor not guaranteeing pairs on votes (“pairs” is when an MP from one side agrees to abstain from voting in order to cancel out the absence of an MP from the other side), should have been a flashing red light for the Prime Minister and manager of government business Christopher Pyne that Labor would play hard ball in the House of Representatives, and they had their first taste of it on Thursday at 4.59pm.

It was then that Speaker Tony Smith moved the customary (and generally non-controversial) motion that the House adjourn. That motion usually goes on the voices, meaning no vote is recorded and it is all over in an instant, but Labor, sensing an opportunity, seized on the motion and moved for a vote. The bells for division (a vote requiring MPs to be present) began to peal throughout Parliament House, drawing MPs out of their offices and sprinting to the floor. With only four minutes to get to the floor, many didn’t make it in time.

Scott Morrison was in the middle of an interview when he heard the bells, tearing out his earpiece and leaving mid-sentence. 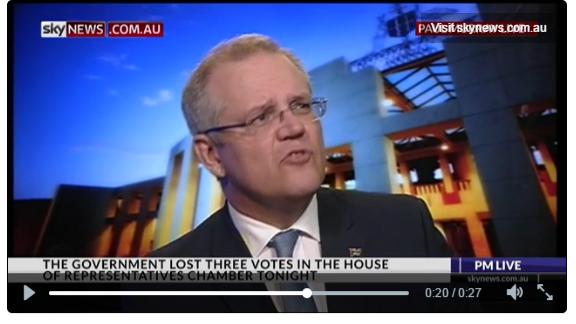 But many MPs were not in the building at all. Parliament is not sitting again next week, and many MPs were getting a head start on their week off. Labor’s Pat Conroy left for the airport after a vote at 4.20pm, only to get a text from the Labor whips that he was required back in Parliament. He made it back in time for the 4.59pm vote.

Labor voted down the motion 69 to 67, with some help from Bob Katter, who is only too keen for a royal commission on the banks.

Albo, fresh from launching his authorised biography with former Prime Minister Bob Hawke earlier in the day, moved to amend a motion to delay consideration on a Senate motion for a banking royal commission. The amendment would bring on debate to that very evening. Pyne was now all too aware of what was happening. “Quite clearly this is a stunt by the Labor Party about the royal commission into financial services and transactions,” he said.

A vote was taken, and Labor again won, but by one vote this time, 71-70, picking up Andrew Wilkie and Rebekha Sharkie. The Coalition had picked up three extra votes with Christian Porter returning, along with Scott Buchholz and Luke Hartsuyker.

The amended question was then agreed to in a third vote lost by the government, again 71-70. Then when it came to whether the final motion — that there should be a royal commission into the banks — it was a draw: 71 votes to 71 with Immigration Minister Peter Dutton, also heading to the airport, turned back when it was safe to do so, and made it back to the Parliament in time for the fourth vote.

Being a draw, it meant that Smith, as Speaker, had the final say, and said that, in line with parliamentary procedure, he was voting with the government — conveniently — in order to keep debate on the matter open, rather than finalising the motion and causing the House of Representatives to pass a motion against the government’s own policy.

Treasurer Scott Morrison labelled it “a stunt to promote a stunt”, Deputy Prime Minister Barnaby Joyce said it was “a charade”. But it forced government ministers to speak at length on the topic that night and gave shadow treasurer Chris Bowen, Opposition Leader Bill Shorten and Katter a chance to make their case. This lasted until 6.54pm, when Pyne again moved to adjourn debate, winning 73-72, with the government adding MPs Jason Wood and John Alexander to its side, while Labor picked up the vote of Greens MP Adam Bandt. Four more divisions over adjourning the Parliament for the day, and it was all over at 7.20pm — more than two hours since the government had planned on ending the day.

This morning Turnbull named three MPs as ones who took the blame for missing the votes: WA ministers Christian Porter and Michael Keenan, and Immigration Minister Peter Dutton. Porter was on en route to the airport to catch a flight back to WA, and Keenan was already on a flight to Melbourne for an AFP event this morning.

Let that be a lesson for any MP who thinks to sneak out before official knock-off time.

Bishop a distraction for a government that needs clear air

Turnbull as the ex-head of a merchant bank might easily be called before a Royal Commission, and there might well be adverse finding against him. Other Cabinet members would have similar fears. A Royal Commission could be the death of this government.

The Abbott opposition where relentless in exploiting any weakness in the Gillard years. Pyne should have been prepared for this. Tony Abbott would be proud.

I reckon Fluffy’s problem is that of all Born to Rule – they can’t see how the lower classes can do what their class has every right to do, let alone better?

The amazing thing is how the ‘mandate’ came apart so quickly ie: within three business days. I was prepared to give them a fortnight to hold it together before the wheels fell off.

Obviously I underestimated the ineptitude of the Turnbull govt.

Personally I don’t believe in this fabled, secretive multi-headed “mandate” beast?
One minute it’s germane to “why a party was elected”?
Then it transmogrifies to being able to renege on undertakings made before an election for votes – like “non-core promises”?
A head with the right to being able to “genetically modify” what was voted on (ie actually taken to an election for the people to pass judgement), based solely on the perceptions of the member, based on “selective” research/interpretations? Or, at least, the beliefs of a donor/lobby-group sponsorship?
Another head the capacity to tell people they “misheard” what was said before an election – gulling the electorate? Like “No cuts to ABC/SBS funding”? “No new taxes”? “Health co-payments”? “Lockstep with Labor/Gonski over education”? “We will honour our commitments”?
So does it look like a unicorn? A roc?
A phoenix? It certainly seems to rise from it’s own “ashes(?)” after each election – especially from a Limited News Party Government nest?

Since when has a vote in parliament been a “stunt”? …..what an arrogant response!

My thoughts exactly. Each side tries to maximise the opportunities to bring matters before the House and when they have the numbers to do so they press ahead. As an elector I expect them to do this. And particularly this week where the parliament sat for three days (one of which was largely ceremonial) after four months of what would, in other industries, be called “stand down” time.

So they are expected to be there and vote and that is called a stunt?? It’s an abuse of the English language.