Want to generate buzz? Just lie to punters and the media

You got us, Hawthorn Football Club. You lied to the media, and they (mostly) bought it.

Want to create buzz around your brand and garner widespread media coverage without paying a lot for advertising? It’s easy — all you have to do is be deeply duplicitous. First create a fake video, do nothing to reveal it’s an ad or who is behind it, wait for the reporters to start flocking, actively lie to them about its authenticity, and then, when it’s everywhere, reveal it’s a fake, earning yet another round of coverage, this time with your brand up in lights.

Journalists, particularly day-to-day news reporters, can do little to weed out those who deliberately lie to them. And most outlets are after clickbait. So it’s no wonder dozens of Australian media outlets reported on a fake video of a hawk dropping a live snake onto a family picnic.

It’s not like the media did nothing to try to confirm the video’s authenticity. The video was uploaded on Tuesday to a newly created YouTube account with the alias “Douglas Wong”, and reporters got in touch with him to ask about it. He gave interviews.

“I’m from China and my uncle was visiting so we had a barbecue to show him the Australian ways,” Wong told BuzzFeed. “The snake ended up sliding back towards the river past those barriers. I think it was just trying to get back to the tall grass, not really chasing my uncle.”

Other outlets, like 3AW and The Age, interviewed avian experts (some of whom said it was fishy), and others included comments from other social media accounts pointing out the shadows on the video were wrong. Most outlets hedged their bets, saying the video could well be fake, but they weren’t sure.

Well, a fake it was. It was commissioned by Hawthorn Football Club to launch their 2016 finals campaign. According to a statement yesterday afternoon, the Hawks wanted to create something to “encapsulate the club’s finals theme and generate widespread media coverage”. That theme isn’t, apparently, that hawks will ruin your day and possibly endanger your family, but that “the Hawks are on the attack”.  “Hopefully we haven’t scared too many people off a BBQ by the Yarra,” a spokesperson said.

The video was created by Melbourne production company The Woolshed, which has been doing this kind of thing for some time. In July, managing director and co-founder Dave Christison told Mumbrella:

“We set out to better understand exactly how to create short-form, highly shareable, snackable content that is capable of reaching worldwide mass audiences without the luxury of pricey media buys, ad campaigns, publicity strategies or distribution deals.”

The company had, at that point, created eight highly viral, fake videos, most of which had been widely covered in the media. Asked if he felt bad about fooling the media, Christison said he was surprised few noticed five of the videos all came from the same YouTube account.

Christison says the agency is now hoping to create this type of video for paying clients. The Hawks are an early adapter — Chistison told Mumbrella today it was only the second video they’d done for a client. “The marketing department at the Hawks came to us after the release and the media around the viral experiment and wanted to work with us on a brief to generate buzz around the Hawks leading into the finals,” he said. The response from the media, he added, was “pretty much what we were going for”.

“The objective of these things is to get into the news, get into the media and to create an audience online.” 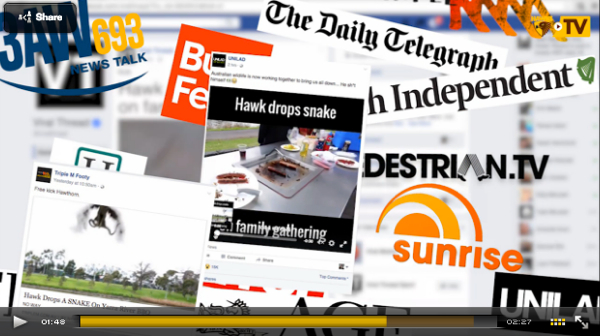 There’s no way the video would have gotten the coverage it had were there not a possibility that it was genuine. The Hawks have gotten their viral advertising hit, but at the cost of people’s trust in the media. The media is already struggling in that department. People’s scepticism towards journalists is cleverly exploited by corporations and politicians to avoid public scrutiny and undermine investigative reporting. In the age of Donald Trump, this kind of stuff has consequences. But we hope the Hawks are happy with their coverage.

News, news everywhere, but not a word of it is real

Plausible video though – I saw a harrier pick up a snake and then drop it in the Carmague once – I have photos – it just didn’t land on me.

Really? You feel you’ve been hard done by because you believed something on the internet was real? You feel your profession has been besmirched? “People’s scepticism towards journalists is cleverly exploited by corporations and politician”
Cry me a bloody river. The poor, misunderstood journalists, plugging away, trying to remain impartial and ethical.
The media loves clickbait – in fact you guys invented it!
So, suck it up, move on, and say, well done Hawthorn Football Club.

If this is not the apotheosis of “need clickbait” cul-de-sac masquerading as news then journos. should turn in their keyboards and just rely on touchscreen.
For at least the last two decades reportage has been seduced into the degradation of stenography and pretending otherwise.
The question is not so much how can one tell advertorial from reality but why one would consider it to be anything else.