To catch a thief: who stole Picasso’s Weeping Woman (part 2)?

The theft of Picasso’s Weeping Woman from the National Gallery of Victoria (NGV) remains one of their most mysterious in Australia's art history. In the second part of this series, freelance journalist Angus Smith enters the refined world of high art to try to solve the crime.

In one of the most daring art heists in Australian history, a thief or thieves took a world-famous Picasso from the walls of the NGV. The case has never been cracked. Can we get to the bottom of one of Australia’s greatest mysteries? Read part one of our investigation here.

Gareth Sansom is a McCaughey Prize-winning artist and was dean of the VCA School of Art at the time of theft. The school backed onto the NGV, and only a door separated the two. “Students needed to show their VCA student card to use that back door. After the incident that was stopped,” he says.

Sansom knew suspicion would quickly fall on his art students, who didn’t do much to alleviate this suspicion when they produced a whole series of replicas of the Weeping Woman and scattered them around the school.

“So these young cops were wandering around trying to find clues. Some went underground, and through air-conditioning ducts and all sorts of things, and you would hear a couple of yells, like ‘here it is, here it is’ because we had some very good figurative painters … there would have been two that would have been exact replicas,” he says.

“It was a bit of a joke, but I don’t think the police were that amused.”

“My guess is that those people are still around and they are in their mid-50s heading toward 60 now, so how they kept it to themselves, I have got no idea.”

“If it was an inside job, I think they wanted to embarrass the gallery. And the picture was always going to be returned. And because it was professionally taken off the stretcher and the backing board and everything else, it was not damaged remotely, and it was packaged professionally when it went into that locker.”

“So why do you think they did it, you must have been curious?” I ask.

“I was amused that this was happening, and it was sort of more exciting to everybody in the school. Nobody felt threatened, it was just weird.” 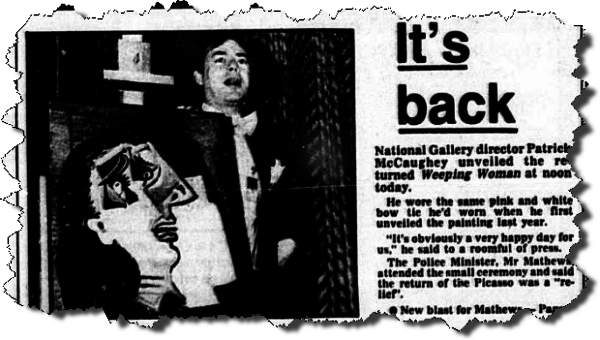 Gabrielle Williams shuffles through her notes and pulls one out “Sitting in the pub, wrapped in brown paper, under Chloe, with the Picasso sitting at your feet.”

Williams’ most recent book, The Guy, the Girl, the Artist and His Ex, is also based around the theft of the Weeping Woman. She was 23 when the theft happened and says she started interviewing and collecting notes about 10 years before the book was published. Many of her notes have never seen the light of day.

According to Williams’ source, the thieves took the painting on the Saturday night and stayed overnight in the gallery. “Once the doors opened [on Sunday], they just walked back out with the painting under a coat.”

“Afterwards they went to Young and Jacksons, the pub.” They got a table under the famous Chloe painting. “So they went there and they had the Picasso, they had a beer and had the Picasso sitting at their feet.” She also discovered, but did not include in her book, “when they brought the painting home, you know it was unframed, that they hung it above their bed that night”.

“I thought that was a really nice touch. They would have gone to bed looking at it and woken up and gone ‘Oh my god, look at what we’ve got.’” She laughs.

“One of my really good girlfriends was married to the brother of a really quite well-known artist … and the rumour was his friends, some of his friends had been involved in the theft,” Williams tells me. But she won’t tell me who that is.

I ask her straight out if she knows everybody involved. “Yeah, I have a fairly good idea of who probably did it, but as they said to me, ‘This is still a live case, and if names were named then they could still go to jail.’”

Williams wasn’t going to offer up any names. Although, perhaps the names she didn’t say were equally revealing. Possibly out of sympathy, or maybe cruelty, she gave me two more clues. She said the typewriter the thieves used had a funny S keys and they were worried that if the police found the typewriter they would be nicked because the S was so distinctive.

She also said that while two people wrote the first two ransom letters, a “pissed-off” girlfriend got involved for the third letter.

“Who do you think did it?” I ask Fiona Larwill.

“Gab, or Gabrielle? I offer. “Because her friend married the husband, the brother of one of the artists?” I’m speaking slowly, as if the name is on the tip of my tongue, but I just can’t recall it.

“You know who it is,” Larwill looks at Crawford and says the name of both the friend and the husband, the name Gabrielle had given me. “That’s who we are talking about.”*

Crawford has a look of surprise on his face.

I put the cigarette out.

“You did quite well, didn’t you?” says Crawford, as I close my notepad.

“I am not entirely sure,” I reply.

A name at last

“Everyone had a name,” says the artist.

“No, not for this,” he replies, motioning towards the voice recorder.

I’m sitting across the table from one of Australia’s greatest living artists. His work is in all the big galleries. He doesn’t want me to use his name for the story, but it’s not his name I’m after.

“No, not for this but do you have one?” I ask, pushing the point.

“Maybe, but not for this,” he repeats.

A lot of our conversation had been like this. I was hoping for an upbeat ending, but the mood was getting decidedly dark.

“I don’t know that the people really realised the implications when they were discussing it, planning it or whatever and then I think they got shit scared afterwards and got the picture back quicker than they planned to get it back,” he tells me.

“Let me put this to you, and I’m not even going to say anything else about it. I’m just going say a name. And I’m basically going to say the name to find out whether that name popped up in all your stuff,” he says.

“So you will note that I am prefacing what I am saying by just saying I am going to say a name. I’m not saying anything about the name, do you understand that?”

“So you can’t make any wild assumptions. All you have to do”, he says, “is answer if you heard the name.”

The artist writes the name on a napkin, and slips it across the table.

“That’s all I am saying … If you put something down, like ‘he is the man’, I will sue you. That’s recorded isn’t it?”

I confirm that it is.

“If this person [were] dead I would say more.”

But that’s another story.

*Due to Australia’s robust defamation laws and my desire to avoid legal action the stated names cannot be printed.

Art galleries are still in the business of public service

Nooooooooooooooooo…way to prime us for Part III, Angus (you must be freelance). Lovely yarn.

And I for one am willing to kick off a Crikey voluntary self-outing fund with a $100 pledge. It’s the Oz art world so I reckon if we can crowd-scrounge a few grand and maybe a couple of bottles of decent claret that should be enough…