Bugger it ... no excuses. I dozed off, writes Senator Derryn Hinch.

If this radical “Inside (really inside) the Senate” weekly epistle is going to be the real deal, then I must face the most — shock! horror! — incident in one of the truly biggest moments in my life this week.

As I said on the Justice Party Facebook page:

“I tweeted from inside the Senate (note to self: Find out if that’s legal): ‘It’s official. Now sworn in as Senator for Victoria in 45th Parliament. Now it begins.'”

It was an emotional moment. Walking alone down that glass-lined corridor on my way in, I felt the awe and responsibility of it all. As I went to sign the ancient senators’ book — the book, not the senators (apart from me) — I did get moist eyes when I looked up at the visitors’ gallery at my loyal crew (who started as volunteers for our fledgling Justice Party) and gave them a thumbs up.

It was a huge day. Started with Welcome to Country in the Great Hall, where Bill Shorten (who still thinks he won) spoke longer than the Prime Minister. Is that protocol cool? 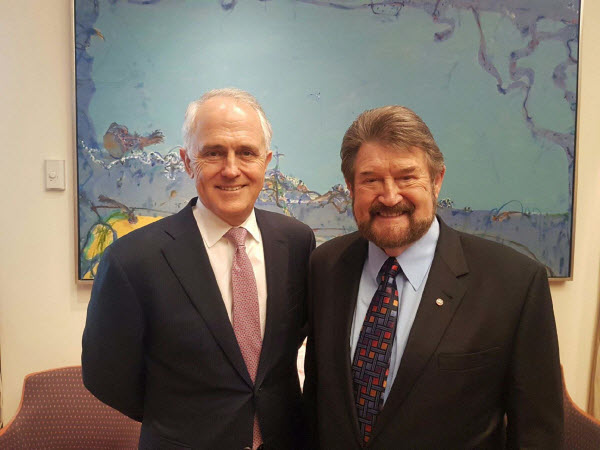 I actually wore a suit and tie. The President of the Senate, Stephen Parry, had briefed us about appropriate attire and said it wasn’t compulsory, so I wore one of my own free will. Perverse, huh?

At that Do’s and Don’ts briefing from the Prez, all the newbies sat in the imposing Senate chamber for the first time. I happened to sit in Arthur Sinodinos’ seat. I must admit I opened his drawer. There was no cash in it.

At that dummy run, I realised that I couldn’t clearly see the Prez. And then I chipped a tooth.

So, back in Melbourne on the Saturday, I saw my loyal cosmetic dentist, Yvonne King, for an emergency veneer. Then my “senatorial sartorialist”, Kelly Casey, who cuts my hair and touches up my beard. And then my optometrist, Helen Robbins, for some tri-focals so I can see if Stephen Parry is frowning.

On Opening Day, I had green tea with the PM and got a hug from Julie Bishop and a pic with the Governor-General. Malcolm Turnbull has a stunning John Olsen on his wall. From his own collection — not from the National Gallery, Aladdin’s Cave, which senators get to borrow from.

I explained that Jacki Weaver and I owned an Olsen from the Lake Eyre collection but the bank thought they needed it more than we did. Like my Mt Macedon farm and vineyard. And a couple of properties in Hawaii.

That will make the pecuniary interests register pretty straightforward. 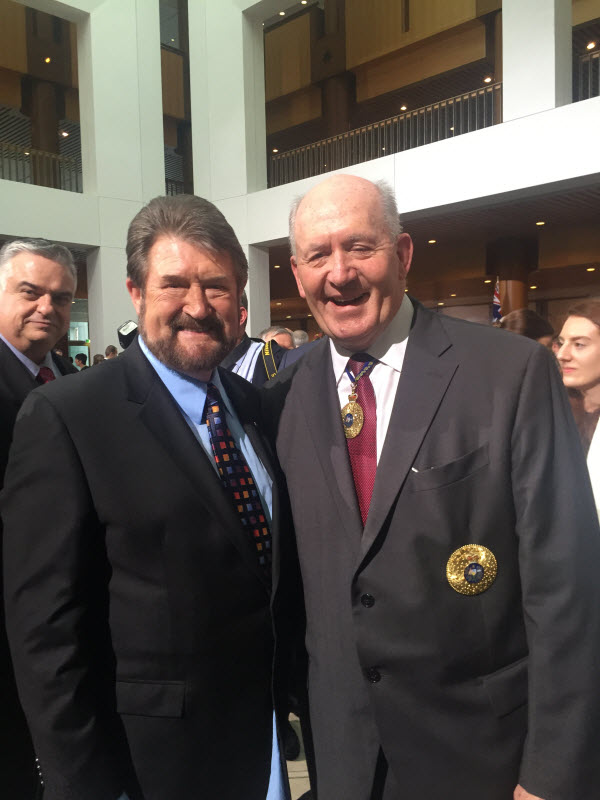 Cory Bernardi tracked me down in the Senate dining room, where I was lunching with my staff, to get my signature on a bill to remove “offend” and “insult” from 18C. That’s my fall-back position, but at least it will get it debated. Issue one.

(Fact check: the bottled water in the Senate dining room is halal-certified. Wonder if the Hanson knows? Will she dine there now? Question: how many waterfall throats do they cut and bleed out to get halal water?)

Issue two: I attacked Senate censorship and pounded out an iPad media release announcing my decision to support the press gallery and get the Senate to greenlight more media freedom and oppose archaic restrictions — which don’t apply in the lower house — on still photographers.

“People have a right to see exactly what is happening on both sides of the Parliament. The media — and thus the public — should be able to see us in action, or photograph our inaction. If you get caught nibbling your ear wax, or counting your money or dozing: tough. We are here to represent the public, and we are paid a lot of money to do it. It is absurd that the media can’t effectively show the public exactly what we are up to.”

“This is not about publicity for me. It’s not about more exposure for my bearded mug — this is about the public being entitled to see the people who represent them representing them, even when we’re stuffing it up.”

And then came the gotcha moment. Sleepergate. Hinch caught with eyes closed during the GG’s speech.

I could claim sleep apnoea, from which I suffer. I’ve overnighted at the Epworth sleep clinic. Tried a CPAP machine. But bugger it … no excuses. I dozed off.

Other people did too as we listened to a re-hash of a long, boring speech spoken by a bloke in an ill-fitting suit that looked like a Nikita Khrushchev cast-off. Using other people’s words while he talked about “my government”. We’d heard it all in the marathon election campaign,

Bob Katter later told me that Wayne Swan had elbowed him three times and, on the other side, George Brandis and Christopher Pyne looked suspiciously somnolent.

Using the old Hinch program motto — if you are being run out of town, pretend it’s a parade and you’re leading it — I can see a silver lining.

It also focused attention on the fact that on any other day (because of an Opening Day exemption) the media could not have published that photo. And that is ludicrous censorship.

After the pic went so public I still introduced a motion to end that censorship.

Not bad after the old man of the seat had been the target of a nanna nap pap.

A letter from the editor-in-chief: too much spin, too little nuance in the big tech debate

Hey Derryn, try and steer clear of the BS right wing cliches, if at all popular.

Reference to cutting the throats of waterfalls also reveals a sad ignorance, so you’ll fit right in to the new chamber. Ask one of your Jewish friends about it, it’s pretty much identical to kosher diets. Would you have made the same comment about kosher diets and expected it to pass without comment?

But don’t get me wrong, I wouldn’t expect you to stop being a doofus at this stage in your life. Old habits and all that.

If at all possible, that should have read, if it gets through moderation. Sheesh!

A bigger popular majority than even Bumbler Beezelbub in the GST election.

Senator Hinch, you are a senator not a rascal out on a lark. If you can’t show enough respect for the institution and your constituents to at least stay awake, you could at least show some contrition rather than treating it as a joke and giving the school yard excuse “I wasn’t the only one doing it!”.
I had hoped you would rise to the position but it seems I was wrong; you are still appear as a bloviating egomaniac.