That was then. In his first speech in Parliament yesterday, Liberal MP for Goldstein Tim “Freedom Boy” Wilson gave a moving tribute to his long-time fiance, Ryan, noting that they were still waiting to get married. Wilson is on board with the idea of a public vote on same-sex marriage, recently writing an op-ed for Fairfax in which he encouraged LGBTI Australians to stop fighting and embrace the plebiscite.

But it wasn’t so long ago that Wilson was vehemently arguing against the plebiscite. In a submission to the last parliamentary inquiry on the matter last year, Wilson, then a Human Rights Commissioner, argued eloquently that a plebiscite was not the way to resolve the issue of same-sex marriage:

“A public vote will do nothing to resolve the substantive issue in a way that unites Australians and takes the country forward together with a proper respect for the rights and freedoms of all.

How times change. While other backbenchers are revolting over 18C and other issues close to their hearts, Wilson appears to be falling into line.

Guess who loves Kathy Jackson? With the news that Kathy Jackson faces 70 criminal charges, including theft and misconduct, now seems like a great time to revisit the many things that have been said about Jackson, the whistleblower who brought down former Labor MP Craig Thomson and was then ordered to pay back the Health Services Union in civil proceedings last year. But before that she was the hero of the Liberal Party.

“Kathy Jackson is a brave decent woman and she is speaking up on behalf of 70,000 members.”

“Jackson, Athena, toppled two union leaders … In her wisdom, and in deciding to wage war with the HSU, she may well have strangled the union-ALP umbilical cord.

“More strength to her arm.”

Senator James Paterson, before being elected, thanked Jackson when she spoke to the HR Nicholls Society

”From the bottom of my heart … thank you for all the ammunition you have provided us with tonight.”

He didn’t know just how much ammunition there was.

Lovely to meet you? Our Environment and Energy Minister tweeted yesterday that he had the pleasure of meeting with Greenpeace — but by the look on his companions’ faces, the pleasure was all his. 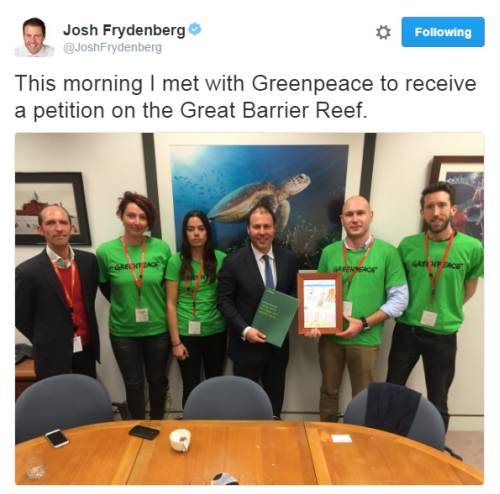 Harvey Norman and the delayed dividends. Yesterday, on the latest day possible (when rivals like JB Hi-Fi have reported weeks ago) in the June 30 reporting season, Harvey Norman produced a very solid set of figures — sales and profits up sharply, and the company is zinging along. Harvey Norman shares hit an eight-year high yesterday, making Gerry Harvey and his family (who own more than 30% of the shares) richer.

Now there is no reason for such a long delay in payment. For example, JB Hi-Fi, the biggest competitor to Gerry Harvey’s retail empire, announced its dividend on August 15 and will pay it on September 9. The Commonwealth Bank announced its final on August 10 and will pay it on September 29. And miner Independence Group yesterday said its 2 cents a share final would be paid on September 23. Gerry Harvey and others in his company can’t excuse the delay by saying the CBA is a big bank. Harvey Norman is a big retailer, with a market value of well over $5.9 billion.

JB Hi-Fi is, in fact, smaller than Harvey Norman with a market cap of less than half Harvey’s at just over $2.9 billion. And yet it managed a dividend payment period more than two months quicker than the bigger and wealthier Harvey Norman. At last report, Harvey, and his family controlled around 36% of Harvey Norman’s shares, so Harvey would argue they are in the same boat. But they don’t have to be if they are as generous about paying out dividends to shareholders as quickly as possible. After all, isn’t the fiction that shareholders are the owners of the company?

..or even massaging books.