There's one trait that unifies the senators who are petitioning to change the Racial Discrimination Act. No prizes for guessing what it is.

What’s the biggest priority for the government? If you ask Prime Minister Malcolm Turnbull it’s budget repair —  the “massive moral challenge” facing Parliament. If you ask his backbenchers, though, the first order of business should be to protect their ability to offend and insult whomever they wish. Yesterday, Liberal Senator Cory Bernardi launched a petition signed by 20 senators to amend the Racial Discrimination Act, which is expected to be moved as a private member’s bill on Thursday. Bernardi, who has recently started the conservative version of GetUp and often speaks about the government as if he were not a part of it, released the petition showing that every Coalition Senate backbencher except Jane Hume has signed it, as well as six crossbenchers. Crikey‘s Bernard Keane noticed that there was one thing that united the 20 signatories to the petition: 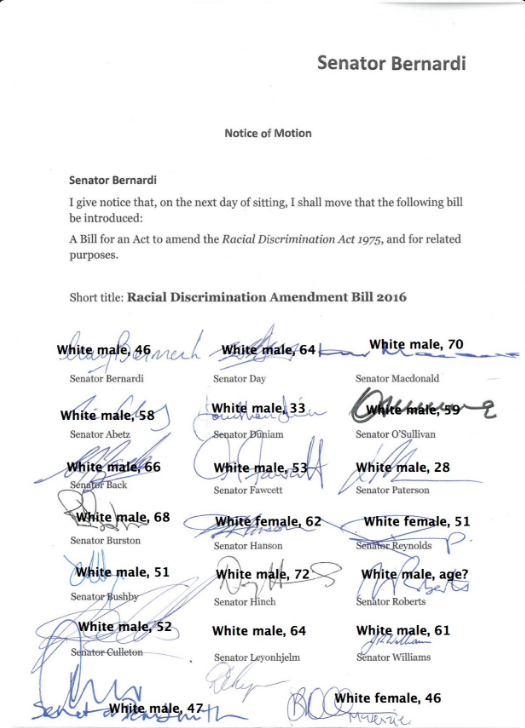 And for those wondering who the John Hancock of the petition is with the giant signature at the bottom, that’s Senator Dean Smith, the deputy whip in the Senate.