Media briefs: to blur or not to blur … TV ratings … ‘Huma cuts off Weiner’ …

Has social media changed the rules of depicting kids' faces in the news? And other media tidbits of the day.

To blur or not to blur. News outlets have a history of caution when it comes to depicting children without their parents’ permission. But a new wave of stories about risque costumes posted by parents on social media have thrown up different approaches.

This week, a young boy dressed as Ben Cousins had a parent dab white flour on his nose to represent the footballer’s drug use. The Daily Mail decided not to blur the photo, which is still available on social media. Yahoo7, meanwhile, had the unidentified child’s face blurred.

It follows last week’s widespread reporting of another child dressed up in brown-face to better represent Fijian West Coast Eagles star Nic Naitanui. That image was mostly pixellated, apart from on the Huffington Post, which choose instead to crop the image below the eyes.

TV Ratings. The metro figures told the story of last night: only two programs with a million or more viewers — Seven News and Seven News/Today Tonight from 6 to 7pm, and perhaps a third, Nine’s 6.30 News component which had 999,000 viewers. From then the figures fell away, despite the line up including Zumbo’s Just Desserts (which did better than Monday night), The Block (which faded, as expected) and Australian Survivor on Ten, (which helped bolster Ten’s performance).

But the grim fact for the networks is that none of the trio managed to crack the million viewer level in the five metro markets. Perhaps had one had not aired last night then the audiences for the remaining duo might have been higher. But that might not have happened automatically such is the level of boredom among viewers about these so-called ‘reality’ programs.

That was underlined nationally where the top four programs were Seven News, Nine News, Seven News/Today Tonight and Home and Away. Just Desserts jumped to fifth nationally from ninth on Monday night. That must have been all those ABC viewers from Monday night who migrated to other networks last night looking for something sweeter than the much weaker line up from the national broadcaster.

Seven won total people, Nine did well in the demos with Married At First Sight. In the regions, Seven had an easy win. Ten moved from fourth on Monday night to third last night, thanks to Australian Survivor replacing Life In Pieces which has vanished without a trace. A case for NCIS, perhaps? — Click here to read Glenn Dyer’s full TV Ratings.

Front page of the day. God’s gift to subeditors … 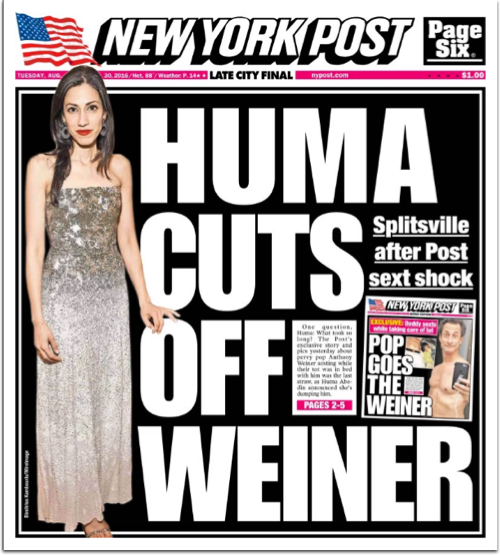