Time to follow the leader. As the senators and representatives of the 45th Parliament were sworn in this morning, there was a nice routine to each of the oaths or affirmations, and it doesn’t all happen automatically. Senator James McGrath posted this photo of the instructions to Facebook and Twitter, telling his followers: “Essentially today is a lot of speeches interspersed by a 19 gun salute and a nice afternoon tea.” 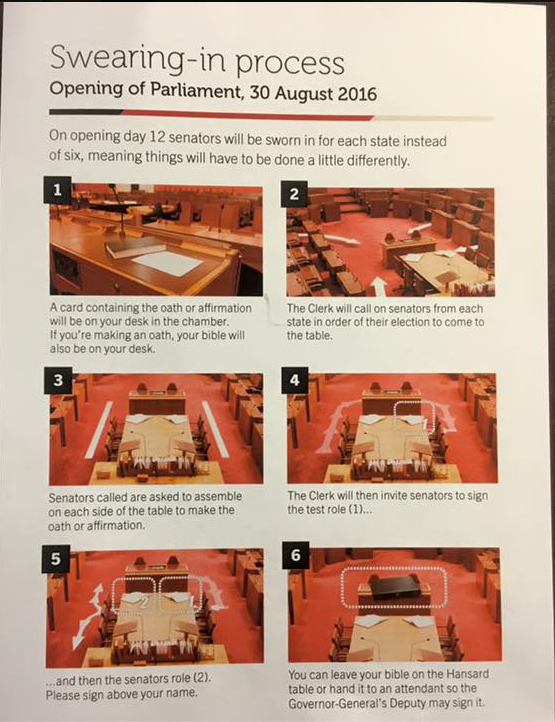 NBN satellite issues. A tipster suggests there are potential issues with the procurement of satellite tech for the regional and rural users on the NBN who will be on the Sky Muster satellite service:

A spokesperson for NBN Co said only a small proportion of satellite dishes had been replaced since launch, and it was in no way systemic.

Activ8me, which is responsible for the modem installation, was contacted for comment.

Yellow and black! (and green) For fans of the 10 AFL teams that failed to make it to the finals, it is time to look ahead to cricket season and dream of 2017, where the early draft picks will improve their finals hopes. One fan took the final result of the year to a new level, calling sports talkback radio station SEN to pour his heart out following Richmond’s 113-point loss to Sydney. “Mario from Doncaster” started with a story about former US President John F Kennedy’s wife, Jackie (and yes, this relates to Richmond).

You can listen to the call here.

“Guys, when President Kennedy was assassinated, (wife) Jackie’s famous pink dress — the Chanel dress — was covered in blood and she refused to take if off that day because she wanted America to see what they had done to her husband in Dallas,” the caller, whom SEN’s Twitter account describes as a regular, said. How do you get from this to Richmond? Mario from Doncaster can get there, comparing his Richmond guernsey to the pink dress.

“Now when Richmond was down by 130 points — no listen — I vomited all over myself, and I haven’t taken it off.”

Hosts Daniel Harford and Mark Allen didn’t recognise the true tragedy of Richmond once again failing to make the finals, or even ninth position on the ladder, laughing while Mario seemed to break down in tears.

Only in Melbourne? Maybe. 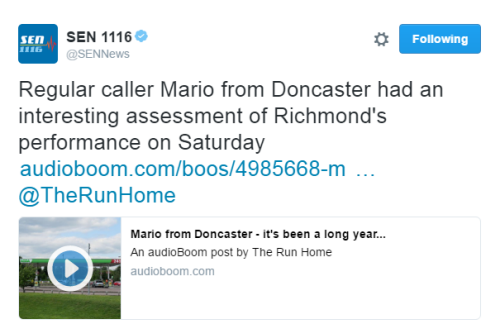 If you build it …  Presidential candidate Donald Trump’s major immigration policy, apart from banning Muslims, is to build a wall between the US and Mexico in order to stem the flow of illegal immigration. This policy has been assessed by engineers in the press, who have said that the money and time that would go into building the wall described by Trump is way beyond what Trump has imagined:

“Human beings have built a 2,000-mile-long frontier wall exactly one time. Once. And it was accomplished only through a centuries-long building campaign that necessitated the forced labor of millions of Chinese peasants.”

A tipster tells us that a recent engineer-led feasibility study found that to build a concrete wall in the dry conditions of the US border, one end would crumble before the other end had even been built — so even if the project of building the wall actually managed to start, it would never end. Even if Trump does get elected, we doubt we’ll ever see that wall.

All old white men look the same. What does Joe Biden have to do with Malcolm Turnbull’s terrible polling numbers? We’re not sure, and Reuters hasn’t clarified with this tweet about today’s Newspoll featuring a picture of the US Vice President. 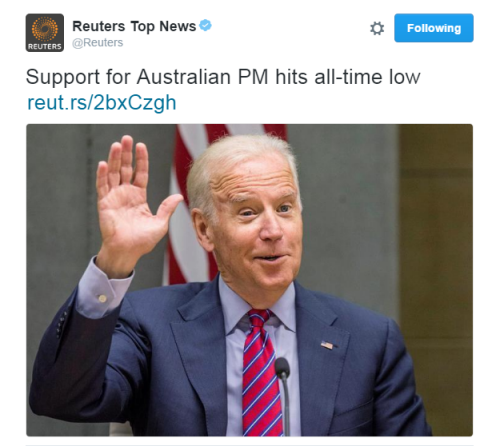 Is there a typo in photos 4 and 5? Shouldn’t it be roll instead of role?

MJM
Reply to  The diving swan

Yes I agree. I wondered what role meant in both places.

Like that damned Electoral Role – what should it be?

Surely that link between Turnbull and the US VP is obvious? Malcolm’s just bidin’ his time til his far right go so far as to reappear in his “sensible scenter”?