There were two Peter Rushtons, both priests. One was a paedophile, one was not. You can see where this is going ...

The Australian accuses Chris Mitchell’s relative of paedophilia. The Australian today issued a profuse apology after placing a picture of the wrong man in an article about historical sex abuse in the Anglican church.

The picture ran alongside a story on the Newcastle Anglican church’s history of sexual abuse, revealed at the Royal Commission into Institutional Responses to Child Sex Abuse. The story led with details about the abuse committed by Anglican priest Peter Rushton, who has been dead since 2007. But illustrating the story in both print and online was a photo of Catholic priest Peter Rushton.

In an odd twist, the Catholic Rushton is a relative of the wife of former editor-in-chief (and current media columnist) Chris Mitchell. Over the weekend, former Australian reporter Gina Rushton (now at BuzzFeed) tweeted that the paper had mistakenly published a picture of her great uncle, who has been dead since 1981. 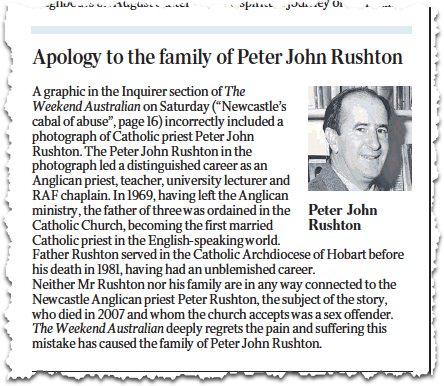 In today’s paper, The Australian says that Catholic Rushton had an “unblemished career”. “Neither Mr Rushton nor his family are in any way connected to the Newcastle Anglican priest Peter Rushton, the subject of the story … The Weekend Australian deeply regrets the pain and suffering this mistake has caused the family of Peter John Rushton.” — Myriam Robin

ABC No. 1 for news. In the month of July, the ABC was Australia’s most visited news website, according to the Nielson digital ratings released over the weekend.

The milestone comes during a period during which all major news recorded significant traffic increases, a boost put down to the federal election. But the ABC got the biggest bumps of all — audiences seemingly flocked to its authoritative reporting of the federal election, with its election night broadcast also the most popular on television.

In June, the ABC bumped the long-time second-ranked smh.com.au into third place, and in July, it was significantly more popular than news.com.au, which grew its audience in July by 14.37%, compared to the ABC’s 30.02%.

Director of news Gaven Morris said in a statement that the public broadcaster’s online and mobile audiences “are as important to ABC News as our television viewers and radio listeners, and it’s gratifying to see they value the services we provide”.

“Australians have a huge appetite for high-quality news and current affairs, as well as for the in-depth analysis that makes sense of events and provides context. Their desire for independent, trusted journalism is just as great on digital platforms as on broadcast platforms.

“We’re exploring ideas for how we will continue to improve our digital coverage and services.”

The ABC’s popularity online, which has been increasing for some time, bodes poorly for commercial operators keen to monetise digital audiences.— Myriam Robin

TV ratings. Seven won Total People in the metros, Nine won the main channels. In the regions though it was clear cut as Seven won everything. And in both the metros and regions, Ten finished fourth as Australian Survivor lost more viewers. The ABC ended up third in both areas thanks to the 7pm News, Grand Designs NZ and Vera, which was a much cheaper and more successful line-up than the expensive Australian Survivor on Ten with its 866,000 national viewers, of which a low 662,000 were in the metros on the biggest viewing night of the week. That national figure is barely enough for Ten. This program is not I’m A Celebrity —  it is more I’m a non-entity….

Seven debuted the Endemol/Shine format The Big Music Quiz (which would have been much better for Ten). It had more than 1.7 million national viewers and second place.In the metros it had 1.211 million and third. But let’s wait to see till next Sunday to see if the audience returns. It has a more upbeat feel than Zumbo’s Just Desserts. Nine’s The Block did well with a reveal night: it managed 1.610 million viewers and over 1.15 million in the metros.

And looking at Offsiders yesterday, the Sydney Swan supporter who was watching (moi) would have liked to have hear noted that the Swans had won the minor premiership from the heavily Melbourne-centric panel and host. All it would have taken would have been just a few words more than noting that the Swans and Giants would meet in a final this Saturday week for the first time, in Sydney,with the Rugby League mob only having two (maybe three) live teams in the finals.

Insiders did well with the Malcolm Turnbull interview: 492,000 national viewers on ABC and News 24.

Zumbo’s Just Desserts back to two episodes a week after starting out its first week with three and slumping over the three to the point where the program had lost 40% of its national audience from opening night last Monday. This week its on Monday and Tuesday nights, with Seven slotting Border Security and The Force into Wednesday’s hole (the two are Seven’s ‘go to’ programs when a problem timeslot needs to be filled). — Click here to read Glenn Dyer’s full TV Ratings.

Front page of the day. The NT News’ front page from Saturday was rather something … 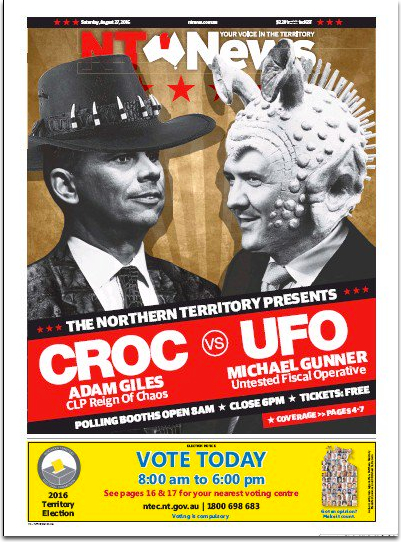