The Australian spoils the winner of tonight's Miles Franklin Award. Plus other media tidbits of the day.

Miles Franklin winner spoiled. Tonight at the Melbourne Writers’ Festival, the winner of the prestigious $60,000 Miles Franklin award will be announced.

But eagle-eyed readers of The Australian’s website will already know the winner. Literary editor Stephen Romei’s column, which usually runs in the weekend paper, was accidentally put up a day before it should have been. The column didn’t run in the paper, but it was on the website this morning until 9.30am, when Romei got it taken down. “It’s not [cached] on Google, which is a relief,” he told Crikey. The early publication spoiled the 8.30pm embargo, and marks the second time this week that Crikey has heard whispers of the paper breaking an embargo.

The winner of the Miles Franklin is a closely guarded secret, and it’s hard to see the organisers being anything but livid at the reveal. Luckily for them, though, the column seems to have passed largely without notice on social media, where authors and literary fans are still expressing their excitement at seeing the winner tonight. We in the Crikey bunker have decided not to spoil their surprise. — Myriam Robin

E-sports on SBS. On September 2, SBS will air the qualifying final of a tournament of video game Counter Strike. The game involves a team of “terrorists” (the game’s most popular location is in an obviously Middle Eastern setting) planting a bomb that must then be disarmed by the team of “counter-terrorists”, under a barrage of fire from the other team. Players can be either terrorists or counter-terrorists.

The winning team will represent Australia at the global grand final in Indonesia.

It’s not the first time an Australian network has aired Counter Strike (Fox Sports had some on last year), but it is the first time e-sports (as this style of competitive video gaming is called) has come to free to air. The genre of competitive, professional video gaming is very popular in many parts of Asia, where it is regularly aired on television. It’s big business — young people with quick reflexes are willing to devote their lives to training win prizes worth millions of dollars — and gets big audiences. SBS’ release gives a figure of 150 million viewers worldwide.

Speaking of which, SBS seems at pains to convince journalists that e-sports are really, well, sports. The release states:

“The mental agility and reflexes of competitive gamers are enough to rival conventional athletes, with gamers producing the same amount of cortisol as professional race car drivers and pulses soaring as high as 180 beats per minute, the same as marathon runners. Competitors are even drug tested for performance enhancers like Adderall.”

Your correspondent watches a fair amount of e-sports so doesn’t really need convincing on that point. But it is hard to drum up much enthusiasm for Counter Strike going mainstream. It’s a rather stereotypical shooting game with Middle Eastern baddies, which sometimes draws a rather toxic player base. And for the uninitiated, it’s pretty damn hard to follow. The game display jumps between the first-person perspective of different players. If you don’t know the maps like the back of your hand, the camera’s jumps can be baffling. And the players move fast. The other major e-sports are League of Legends and DOTA2, and those feature a top-down display with rival heroes facing off on a more-or-less 2D battlefield. A newbie to the genre may not follow the intricacies, but at least it’s very clear who and where everyone is and which rivals they’re pulverising into digital dust. — Myriam Robin

Press gallery, Hinch v photography rules. It might be possible to challenge the restrictions on photography in the Senate in the High Court, the press gallery has been told, after the organisation’s executive committee commissioned advice from the dean of UNSW’s law school, Professor George Williams.

According to an email sent by president Andrew Meares this morning, the press gallery intends to “test the powers Senators are using to distort” how the public sees them. Though perhaps Meares meant to lower expectations when he closed: “The Committee commenced negotiations on this issue in 1991 and will continue to do so.” 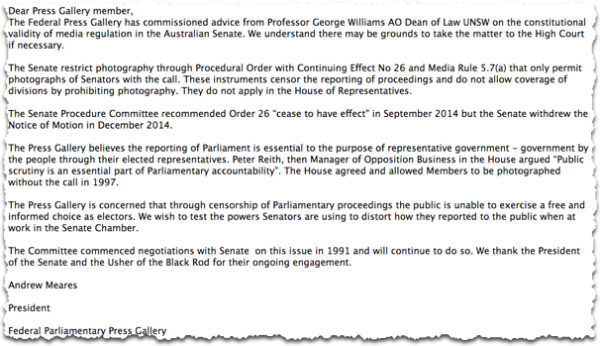 The press gallery already has a supporter in new Senator Derryn Hinch. The journalist-turned-politician says his first move will be to try to remove the restrictions. “People have a right to see exactly what is happening on both sides of the Parliament,” he said in a statement. “The media — and thus the public — should be able to see us in action, or photograph our inaction. If you get caught nibbling your ear wax, or counting your money or dozing: tough.”

“If I don’t get support in the Senate to fix this ridiculous and easily addressed problem, I will give my full support to the Press Gallery in taking this matter to the High Court.” — Myriam Robin

Media deals change. The Australian Competition and Consumer Commission has unveiled a surprise redrafting of its guidelines on media deals. The draft, which marks the first time the guidelines have been touched since 2006, for the first time make mention of the impact on media diversity.

The changes come as the federal government considers changing the media ownership rules, along with the potentially competition-reducing moves by Seven West Media Media to acquire News Corp’s Perth assets.

The draft paper says the commission’s general approach to its merger assessment “is not sector specific”. But it points out that features of the media industry “give rise to some particular issues”.  Those issues and their relevance to ACCC media merger reviews are explained in the revised guidelines and include a reduction in the number of media rivals and the potential impact on media diversity.

“While the guidelines cannot provide an indication as to whether a particular merger might or might not be cleared by the ACCC, they do seek to give parties contemplating a media merger, and those potentially affected by a media merger, a greater awareness of some of the key issues the ACCC may focus on,” ACCC chair Rod Sims said.

“It is not possible to indicate in advance what the outcomes of any proposed merger might be, as each case will turn on its unique set of facts,” the commission said. “The ultimate test however will remain the same: whether a merger is likely to substantially lessen competition in any market in Australia.”

For media proprietors, the message seems to be that they shouldn’t get their hopes up. There’ll be no automatic green lights. — Glenn Dyer

TV Ratings. Nine won the metros, Seven was weak (and Ten ended up second in the main channels behind Nine and in front of Seven). But in the regions a sort of different story with Seven winning total people, but losing the main channels to Nine, with Ten way behind as The Bachelor failed to stimulate the same level of interest as in the big smoke.

In fact in the metros it was a snoring night. The top seven programs were all news and current affairs programs from 6 to 8 pm. The Bachelor at 7.30 was the first non-news program at 7th spot in the metros (and beaten by 7.30).

Tonight: NRL and AFL: go the mighty Swannies tomorrow — beat them Richmond Tigers and become Minor Premiers and rub it in the faces of those Melbourne AFL experts who reckoned you’d finish out of the 8. Australia is playing the Kiwis in the second Rugby Test from Wellington (will it rain, gale or shake?) and also in netball. The netballers will maintain national pride! More footy on Sunday and on Seven on Sunday Night Chris Bath returns with a top story. Watch it, it will top anything that appeals on the (failed) kidnappers show (AKA 60 Minutes). Vera is back on the ABC on Sunday night. Far more interesting than the really bleak Wallander. — Read Glenn Dyer’s full TV Ratings

Video of the day. The Checkout welcomes the ABC’s newest commercial partner … 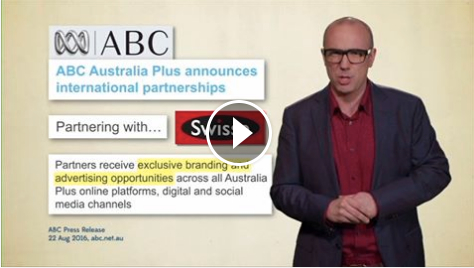