The Senate has notoriously strict policies against publicising what goes on when it is sitting. But the press gallery -- and a new senator -- are trying to change that.

It might be possible to challenge the restrictions on photography in the Senate in the High Court, the press gallery has been told, after the organisation’s executive committee commissioned advice from the dean of UNSW’s law school, Professor George Williams.

According to an email sent by president Andrew Meares this morning, the press gallery intends to “test the powers Senators are using to distort” how the public sees them. Though perhaps Meares meant to lower expectations when he closed: “The Committee commenced negotiations on this issue in 1991 and will continue to do so.” 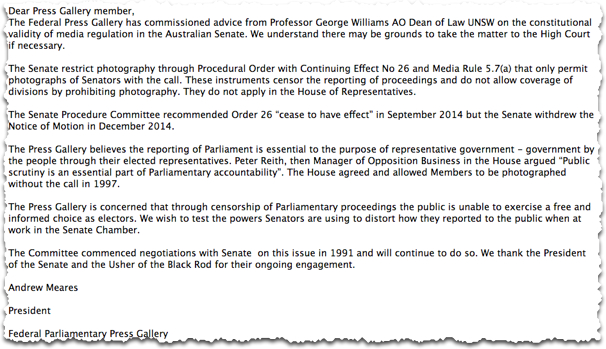 The press gallery already has a supporter in new Senator Derryn Hinch. The journalist-turned-politician says his first move will be to try to remove the restrictions. “People have a right to see exactly what is happening on both sides of the Parliament,” he said in a statement. “The media — and thus the public — should be able to see us in action, or photograph our inaction. If you get caught nibbling your ear wax, or counting your money or dozing: tough.”

“If I don’t get support in the Senate to fix this ridiculous and easily addressed problem, I will give my full support to the Press Gallery in taking this matter to the High Court.”

Journos’ seats for the opening of Parliament given to mysterious ‘guests’