Midwinter Ball bidding opened. The first week of Parliament next week will also coincide with a much-delayed Midwinter Ball (which will be held at the very end of winter due to the election campaign). It’s a time for the press gallery, politicians and corporate sponsors to dress up and drink up in the hallowed halls of Parliament House. There’s a charity auction held every year, with bidding opening today. This year the money will go to the Australian Literacy and Numeracy Foundation, the excellent mobile shower service for homeless people Orange Sky Laundry, OzHarvest, The Big Issue, Companion House, and Look Good Feel Better organisation for women dealing with cancer.

The big-ticket item this year is a tour of Parliament House by the Prime Minister Malcolm Turnbull. Fingers crossed he can show you the Monkey Pod meeting room where the so-called Delcons meet to discuss his overthrow. Or perhaps the office where MPs had to fake a birthday celebration in order to convince Tony Abbott and Peta Credlin they weren’t secretly planning to end Abbott’s prime ministership. The tour concludes with tea in the PM’s office — hopefully all the tea is spilled. That one is already at $5100, with punters clearly eager to have Parliament Malsplained to them.

Next up is a run with Bill Shorten, followed by a breakfast with Tanya Plibersek. Shorten took the John Howard tracksuit powerwalk to a new level during the last election campaign, making his daily runs a feature of his bid for the top job. He wasn’t successful, but his running time has greatly improved. That one has yet to have any bids on it with a starting price of $5000 — perhaps would-be bidders are too intimidated at the thought of keeping pace with Shorten.

If you fancy a night with Hollywood stars and Julie Bishop, a return business class trip to LA in January is up for grabs. That one already has a bid of $20,000. If you want to communicate with the minister for regional communications, you’ve also got the option of bidding for lunch with deputy nationals leader Fiona Nash, no bids on that one yet at $3000.

The final item is a dinner with four widely respected press gallery journos — Malcolm Farr, Mark Riley, Sue Dunlevy and Laura Tingle. That’s got one bid on it so far at $3000. Ms Tips thinks that perhaps an undervalued addition to the dinner would be a subeditor.

“The Reserve Bank of Australia has just announced they are BANNING high-point earning credit cards and AMEX ‘companion’ cards — and frequent flyers stand to lose big. The banks have already started slashing reward point earns — and there are more cuts to come! But it’s not too late to fight back and save our rewards from extinction!” 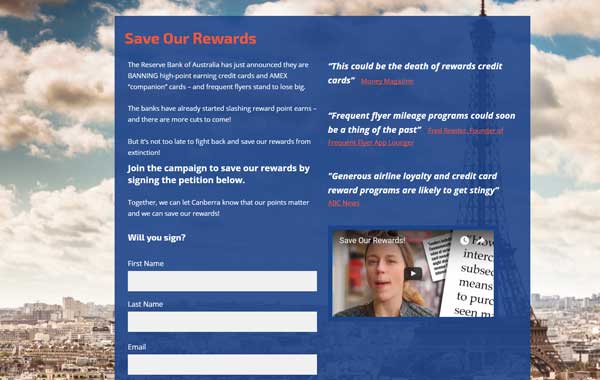 As one of the helpful links the alliance has provided on the petition page, one of the two changes bans high fixed credit card surcharge fees from September this year, to a reasonable percentage of the purchase price. This means the fees on budget domestic flights would improve, while the fees on business and international flights would likely be increased, unless the airlines decide to cap the upper end of the fees.

The other change from July next year would cap interchange fees — the amount the card provider charges back to the banks per transaction — at 0.8% with a weighted average cap of 0.5% — below the 2.2% max today. This has led to some of the rewards schemes announcing that they’ll rejig their rewards program, and it’ll be a bit tougher to get that free flight than it was in the past. Annoying for those who like to maximise their points, but will going into bat for the banks and airlines stir up the grassroots movement the conservatives are hoping for?

Greens in turmoil. Some in the NSW Greens suspected that things would settle down once the preselection battle was over. A tipster informs us, however, the election of Justin Field to replace the late John Kaye in the NSW Legislative Council is already shifting the balance in the NSW branch of the Greens:

“This week there were more than a few whispers from MP’s as Greens members Jeremy Buckingham and Tamara Smith moved Field’s nomination. Even though the NSW Greens have always claimed that they were all co-leaders of the party, in the past it was either David Shoebridge or the late John Kaye from the so called ‘eastern bloc’ who did the nominating and were recognised as the defacto leadership of the NSW Parliamentary Party. With the election of Field, Buckingham now has the numbers against the eastern bloc and it looks like he is going to be prepared to use them.”

Living in De Nile. It is probably no surprise that long time anti-gay campaigner Fred Nile is pushing for the plebiscite to be delayed. In NSW Parliament on Wednesday, he asked state minister Duncan Gay whether NSW Premier Mike Baird  — who has no involvement in the plebiscite process at all — whether “the proposed plebiscite on the issue of two homosexual gay men being legally married in Australia” could be delayed to as late as September next year in order to not clash with “the New South Wales annual homosexual Gay and Lesbian Mardi Gras parade” scheduled for the first weekend in March.

We are shocked, shocked that he’s trying to delay the inevitable as long as possible. We suspect that old mate Nile (who recently used his legal right as a “heterosexual straight man” to marry for a second time) fears that any celebration and public acknowledgement that gay people exist during the plebiscite, might result in his side losing (more than polls already indicate they would). Also, why aren’t lesbians mentioned?

WA arts cuts. Not a good time to be reporting on the arts in WA, according to a tipster:

“After a rounds of redundancies to cull full-time staff, the axe is now falling on regular freelance arts contributors for The West Australian who are apparently being told their services are no longer required. Coming on the back of 10-year Arts Editor Stephen Bevis taking redundancy earlier this month, the local arts scene is concerned about the impact the loss of specialist writers will have on features and reviews, and ultimately the readers which make up their audiences. The arts section will apparently be written entirely in-house by journalists who may have little experience or familiarity with the arts scene.”