Sport and pop music? What it would mean for the ABC to reach 100% of Australians

Several months into her tenure, opinions about managing director Michelle Guthrie are still to solidify, writes Walkley-winning journalist Margaret Simons in a new Monthly cover essay out on Monday.

The essay, for which Guthrie declined to give an interview, raises concerns about Guthrie’s desire to have the ABC reach 100% of Australians. The BBC, Simons notes, aims for this by competing with Britain’s commercial broadcasters, airing popular sport, reality television and an FM-style Top 40 format on radio. Given the ABC’s constrained budget, Simons queries what this will mean for things like ABC Classic FM and Radio National.

A note that appeared recently on the ABC’s website outlining the organisation’s policies about repackaging the ABC’s content to third-party sources, Simons writes, was placed there at Guthrie’s request. Simons writes:

“Guthrie understands the new media imperative. Content is not the only thing that matters. Distribution is almost equally important. Already, the ABC is more porous than it was 15 years ago … Now, Guthrie seems to be saying, the ABC must become less a solid than a gas. Pervasive.”

The essay also notes Guthrie’s style, which is markedly different to her predecessor’s.

“Guthrie now circulates the chair among the executive members and instead sits with the troops and fires questions. One of her favourite comments is ‘Tell me why.’

“Among the executive members, opinions are divided as to whether the new style is refreshing and constructive or signalling an impending chaos.”

“’It reminds us that she is a lawyer by training,’ says one. 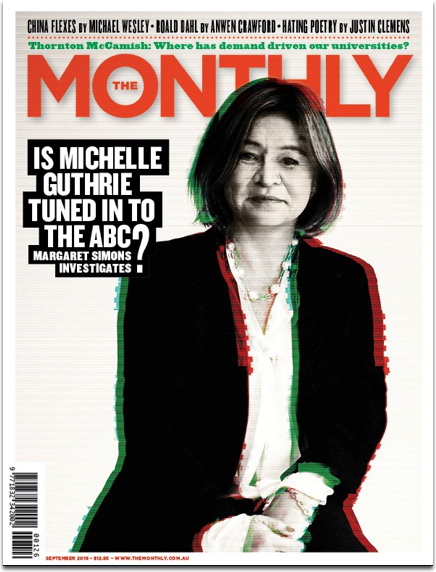