Nine minutes’ walk and a world away

The Australian slams Lee Rhiannon as living in a sheltered inner-city bubble because her office is in Surry Hills. Of course, The Australian's office is nine minutes away ...

The Australian today is standing up for all the true blue Aussies who delight in the animal cruelty that is greyhound racing.

“We’re not sure how many greyhounds and their owners Greens senator Lee Rhiannon encounters around her Surry Hills office in inner-city Sydney. It was entirely predictable, however, that the morning after the Baird government banned greyhound racing in NSW that Senator Rhiannon, a former communist and therefore staunch believer in big government, would join animal liberationists in a campaign to have the sport banned nationally.”

Of course inner-city lefties like Lee Rhiannon do not understand the blood sport, as there aren’t greyhound tracks in their sheltered Surry Hills world. Unlike, of course, The Australian. 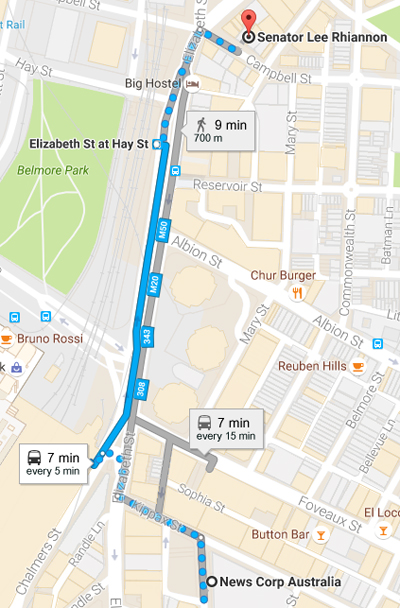 Hundreds, maybe thousands, of traders in humanity (another blood industry) were suddenly deprived of an income. Do lefties lack hearts?

And don’t forget those poor chimney sweeps no longer having the opportunity to earn a stale crust.