New data on the performance of our superannuation funds yet again demonstrates how blinkered the Liberal Party is about industry super.

With deadly timing, the latest superannuation industry data from Treasurer Scott Morrison’s own regulator has directly contradicted his recent attack on industry superannuation funds, and again underlined how superior that sector is to retail funds run by Australia’s big banks and AMP.

Earlier this week, the Treasurer took aim at the industry super sector, lamenting to his friend Ray Hadley that industry funds refused to invest in coal mining for ideological rather than performance reasons. Morrison went on to say:

“It’s not uncommon for super funds to take a position which isn’t just about returns. I think Australians and the Prime Minister and I are frustrated that we’re not seeing more of that $2 trillion in capital which is there in Australian superannuation savings, not lining up on these sorts of transactions, whether it’s those agricultural stations or whether in fact it’s the electricity assets like Ausgrid. So there is an opportunity now, I think for them to engage in that and for example on the Ausgrid sale … I think all Australians would like to see superannuation funds invest more in our own country.”

Alas for Morrison, around 24 hours later the Australian Prudential Regulation Authority produced its quarterly superannuation performance data for June and it made for grim reading for the Treasurer. Because who should stand out as the sector with most infrastructure investment? Why, industry super funds. And which sector is the biggest investor in listed Australian infrastructure? Industry super again. The retail super sector so beloved of the Liberal Party — for which the government would do virtually anything — has so little investment in listed Australian infrastructure companies that they don’t trouble the scorers. 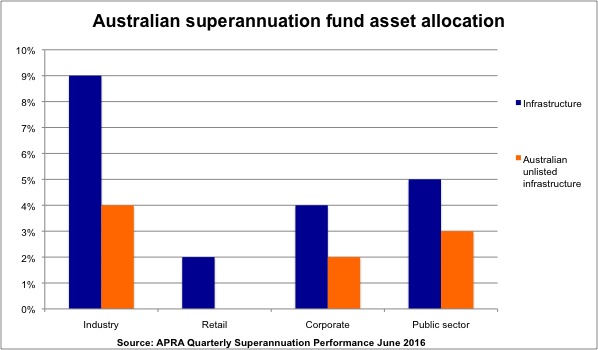 As for his argument that industry super doesn’t invest in coal — indeed, Morrison has a point. The level of industry super assets allocated to commodities, according to the APRA data, is just $37 million, which rounds to 0%. Except, based on the recent performance of mining company stocks, this is a smart move.

Presumably Morrison wants industry funds to be more like retail funds — except, their level of assets allocated to commodities is … 0.2%, or $849 million. Or perhaps public sector funds — they allocate 0.1% to commodities. Or there are corporate funds, which allocate even less than industry funds — just $7 million in total. Why isn’t Morrison attacking corporate Australia’s in-house super funds for failing to invest in coal?

What Morrison should really be doing is encouraging every sector to maximise the returns to their members. Which would mean being like… industry super funds. They performed the strongest of the four sectors, according to the APRA data, with a rate of return of 4%, just ahead of public sector funds with 3.9%. The retail sector came stone motherless last with 1.3%. Perhaps it was its over-exposure to the poorly-performing commodities sector? 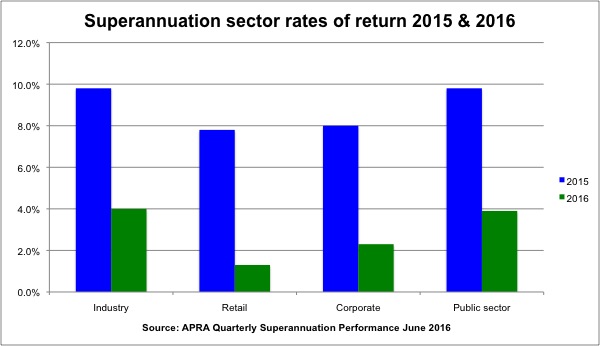 In the face of the persistent underperformance by retail funds compared to industry super funds, opponents of industry super occasionally revert to spruiking self-managed super funds. SMSFs don’t appear in the APRA data because APRA doesn’t regulate them, but the Tax Office every year produces some data on their performance in the preceding financial year. The good people at Superratings helpfully crunched the most recent numbers in January to compare SMSFs with larger funds (of all kinds), showing that, since the financial crisis, in every year but one, larger funds have outperformed SMSFs — helped, of course, by the persistent strong performance of industry and public sector funds.

Unfortunately, the steady flow of evidence about the performance of industry super funds isn’t enough to abate the profound ideological loathing that the Liberal Party has for industry super, reinforced by the millions in donations the party receives from the finance sector. Expect more evidence-free ranting about industry super from Morrison and his colleagues.

Great work; thanks for giving us the charts too.

Most informative. Those charts sure tell the story.

Following this revelation it will be entertaining to see Morrison & Co pull their usual stunt of ignoring facts & explaining that black is actually white.

I think you will find “commodities” in the APRA report means actual physical commodities – like wheat, gold, oil, pork bellies etc (or financial instruments directly linked to a commodity like commodity futures) not a listed mining company stock. Listed mining companies would be under Australian or overseas equities.