Polish up those CVs, journalists of Australia: The New York Times is launching Down Under. Plus other media tidbits of the day.

She said the paper was seeing “strong interest in — and demand for — our journalism” in Australia. “We believe there is likely a large community of potential NYT’s subscribers.

“There is not much more I can say about this for now in terms of plans,” Murphy added.

The confirmation follows a report overnight in Politico that said the Grey Lady was expanding into Australia and Canada, following an earlier Spanish-language expansion into Mexico. That report said the company had “dispatched research teams to lay the groundwork and has begun recruiting journalists to build out small newsrooms in both countries”.

The New York Times is already Australia’s 20th most popular news website, according to last month’s Nielsen rankings, with a unique audience of 844,000. It is one of only two overseas news sites to achieve that level of popularity without a local operation (CNN’s Digital Network also has a strong readership here).

This week, the NYT is kicking off two weeks of paid focus groups with current Australian subscribers in Sydney and Melbourne. The Sydney sessions start tomorrow night, while the Melbourne ones start next week. An email sent to Australian subscribers from the Times’ says: “We are looking to learn more about New York Times digital news readers, aged 25-59, in the Sydney and Melbourne area.” Participants are being paid $90-$100 for around two hours of work.

Crikey has not heard of any journalists yet joining or being sounded out about joining the operation, which appears to be in its research stage, but we’ll let you know if that changes.

The Times has in recent months been offering very inexpensive subscriptions ($4 a-month rising to $8 a-month) to Australian readers. It’s also been beefing up its Australian coverage. Today’s piece is a quiz asking readers whether they “speak Australian” — we trust the Times’ editors are studying up. Much of the NYT’s coverage of Australia isn’t currently written by locally-based journalists. The New York Times‘ already has a Sydney correspondent in Michelle Innis, but many of the recent bylines on Australian coverage belong to NYT staffers based in New York or Hong Kong.

The Times’ old strategy with regards to Australia was ast least partly focussed on offering its content relatively cheaply to Australian publishers for syndication. The NYT’s global coverage is still heavily used in the world pages of the Fairfax papers — one would assume this would change if the NYT and Fairfax began to compete directly for advertisers and subscriptions. — Myriam Robin

TV Ratings. Seven’s night in the metros and regions for total people, the main channels and the demos, but a hole was detected in Just Desserts’ ratings.

In fact for the Sugar Castle (AKA Zumbo’s Just Desserts) the meringue went soggy. It lost 290,000 national viewers last night from its Monday night debut: 1.245 million against 1.535 million, and 250,000 of that loss came in the metros as the audience fell to 830,000 from 1.081 million. If that loss of audience is repeated tonight, the program will get the staggers.

The Block (AKA, another holiday in Melboring!) was 1.367 million nationally, down from Sunday night’s return, but steady on Monday. In the metros, 944,000 also down from Sunday night and just a touch lower (a few thousand) from Monday. It still topped the demos, but Seven had more viewers in the demos for its programs. Nine was a one program network last night which is an ongoing weakness.

And Ten started a lifestyle drama called Life In Pieces last night. This morning it should be called Ratings In Pieces after it flopped: 506,000 nationally with 379,000 in the metros and 126,000 in the regions. Even for Ten with its higher tolerance of lower ratings, those figures are rotten. The target demo — young female viewers — were off in NZ with 800 Words after pigging out on The Block and Just Desserts.

Tonight: Will Just Desserts continue to enjoy the Mixmaster, or sink like a bad souffle? Gruen is back on the ABC, Nine has a very weak line up — RBT and then Skyfall, the Craig Bond movie. Ten has The Bachelor and his harem, plus the solid Offspring. But after Just Desserts, the highlight of the night is the UK produced The Durrellswhich is the story of their life on Corfu before WW2 (That’s All Creatures Great and Small Gerald Durrell and the Alexandra Quartet’s Lawrence (Larry) Durrell.) Gerald Durrell wrote three autobiographical books set on Corfu and the six part TV series is based on those. Could it be a little too British for local viewers. — Read Glenn Dyer’s full TV Ratings.

Front page of the year. Puntastic! 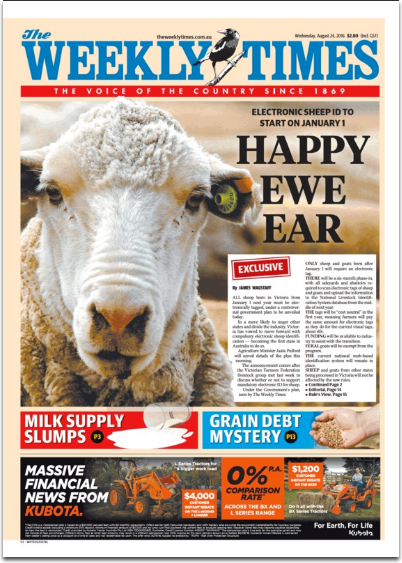