Were NBN raids legal? Remember those raids on former communications minister Stephen Conroy’s office and a Labor staffer’s home to find out what NBN documents had been leaked to Labor? Conroy has said the raids were not legal because NBN Co staff, while employed by the government via NBN Co, are not technically “Commonwealth officers”. Conroy says that as employees of a government-owned business, NBN Co employees are not classified as public servants under the law and therefore are not subject to restrictions against leaking information.

And what does NBN Co make of it all? We filed an FOI request with the company about whether it had any factual evidence that NBN Co staff are considered Commonwealth officers, but no such evidence exists. This is a good way to get the most out of FOI requests, as if it is simply factual information you attempt to obtain, the responding agency has little ground on which to deny access.

That’s not to say that NBN Co doesn’t have advice on whether its staff are Commonwealth Officers, just that it’s not set in stone — or legislation — as a clearly defined fact. One of the difficult aspects of FOI law is that there are exemptions to prevent people from accessing documents that are considered “legal privilege”. So NBN Co might have advice from its lawyers that staff are considered Commonwealth officers, but we will never know.

It’s something of an oversight in all the legislation setting up NBN Co, when the issue of what constitutes a Commonwealth officer has been made clear in other areas. For example, as Crikey revealed last year, the passage of the Border Force Act into law had the effect of making all contractors and sub-contractors working in Australia’s offshore detention network Commonwealth officers, meaning they can be charged for leaks under the same law that NBN Co using against those it thinks leaked documents to Labor.

In any case, the AFP ultimately made the decision to launch the raids on the basis that it considers NBN Co staff to be Commonwealth officers. We asked the AFP for comment but didn’t hear back.

Free(ish) speech warrior. Last week Liberal Senator Cory Bernardi kicked off a petition to encourage the government of which he is a member to reform section 18C of the Racial Discrimination Act to “support freedom of speech, expression and opinion in public debate”.

“The social justice warriors (SJWs) believe that the ends justify the means to stop others from even voicing opinions that don’t comply with their agenda,” Bernardi said on his blog. 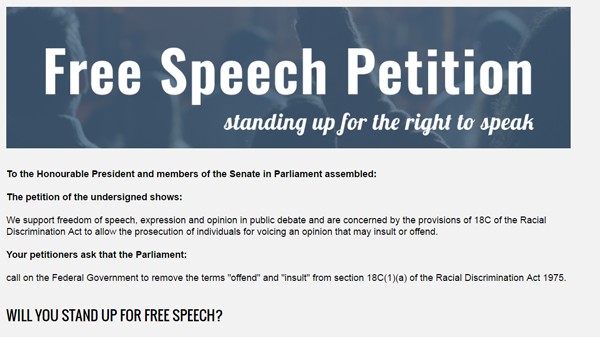 But just days later, Bernardi — who secured a settlement with The Saturday Paper last year leading to a story being removed from its website — is railing against a “vile smear” against him “for which people will be held to account”. It stems from a Daily Telegraph article about a Sydney University course on the treatment of gay people in Australia:

“During a lecture this month about the treatment of gay people in Nazi Germany, students were told it was ‘something out of … (Liberal Senator Cory Bernardi’s) handbook’.” 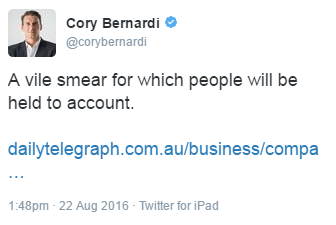 It’s not clear whether Bernardi is threatening to sue the lecturer involved for defamation, but it could make for an interesting defamation case of the Free Speech Warrior versus a lecturer who allegedly went the full Godwin on Bernardi.

What is a cabinet document? In one episode of the classic ABC TV series Hollowmen one of the characters is seen taking Central Policy Unit documents on a trolley through the empty cabinet room, explaining that now the documents can be classified as “cabinet documents” and are therefore unable to be released for 30 years. But this month, the Supreme Court of Victoria challenged the extent to which government can claim certain documents to be “cabinet documents”.

In the long-running case brought by Majid Kamasaee against the Australian government over the conditions on Manus Island during his detention there, the government has sought to block access to 25 documents it claims are cabinet documents.

In addition to actual submissions to cabinet that would be exempt, the government is attempting to classify draft plans to do with the operation of Manus Island, talking points and other peripheral documents that never made it to cabinet as cabinet documents. The government is arguing that anything prepared by the Department of Immigration and Border Protection to inform and support the cabinet must be exempt, as well as any document prepared by a department to brief a minister for cabinet. This stance has the backing of the secretary of the Department of Prime Minister and Cabinet, Martin Parkinson, who told the court that any release of the documents would “significantly interfere with the efficient operation of cabinet, and therefore decision-making and policy development in Australia”.

The court wasn’t completely buying the argument, however, and this month ruled that the government must provide more information on the cabinet process and the “proximity” of a document to a cabinet deliberation.

An unusual career move. Where has Guardian Australia’s former Comment is Free editor Adam Brereton been? The editor of The Guardian‘s feelpinion section became a news journalist for the publication at the end of last year, but then dropped out of public view. We’ve now found him — in the unlikeliest of places. Brereton has joined the seminary.

Brereton’s reverse-Tony-Abbott (journo-turned-priest), which has been rumoured for some time, is confirmed in the latest issue of Catholic Weekly. Brereton is featured as one of seven new seminarians who started at the Seminary of the Good Shepherd in Homebush earlier this year. “I think largely I was just dissatisfied with a lot of the thinness of what I had been reading and writing and just dissatisfied, as many converts are, with my own life,” he told Catholic Weekly. Can peak Guardian drive someone to the priesthood?

How about house prices in Elwood? Why yes, Senator, we are sure that house prices are a good reason why people would be enticed to move to regional Australia, but didn’t you decide that you’d prefer to live in Elwood? 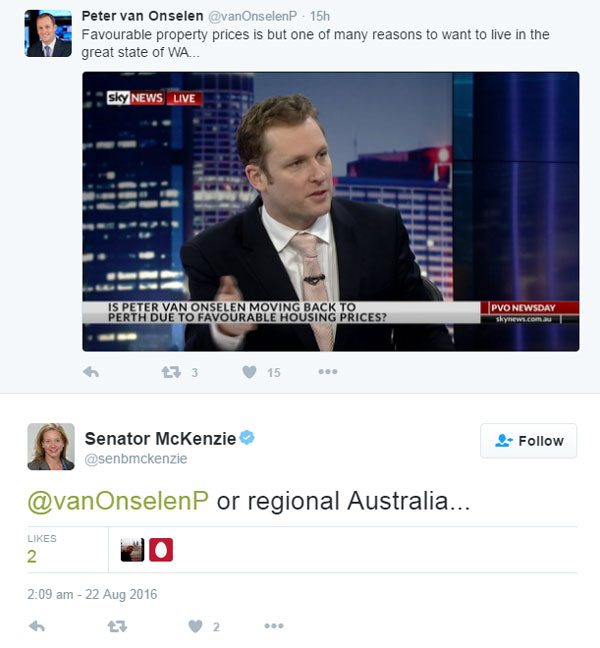 Let’s face it, 18C has been rarely used and the famous Bolt case was really about a lazy journalist who put forth untruths based on race. There was no public interest. Bernardi is a typical racist right winger and a bigot to boot. What is more it seems he can give it but not take it. The biggest impediment to free speech is not 18C it is garbage defamation laws which favour the well off.