Today's front-page "exclusive" in The Australian is only exclusive because the paper chose to break an embargo.

Today’s Australian splashes with a report based on an analysis from the Centre for Independent Studies that found $5.9 billion of government funding on indigenous affairs was being wasted. 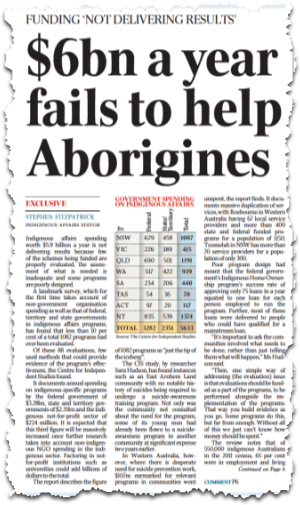 The report was exclusively reported in The Australian, but had been sitting in the inboxes of dozens of journalists since yesterday. The release from the CIS had big red writing on every page saying it was embargoed until 11.59pm tonight. Embargoes are requests for journalists not to publish on a report sent in advance until a certain date, to give everyone a chance to properly read, digest and plan their coverage before rushing to print. Nothing much happens if you break an embargo, but whoever sent it to you might be cross enough to leave you off the list next time. It’s hard to see the CIS being unhappy with the front-page treatment the Oz gave them though.

The CIS emailed journalists this morning to tell them it was OK to write about the report now.

“Embargo has been broken, and hence lifted,” the release this morning said.

Speaking of the Oz, we said yesterday that the paper had got Fairfax’s share price wrong. This morning, the paper agrees …

That column was written by none other than former editor-in-chief Chris Mitchell. If you enjoy reading about him as much as we do, today’s Rear Window in the Fin might hit the spot.