Essential: No to plebiscite case funding – and no to foreign investment

Sixty-two per cent of voters oppose taxpayer funding for advertising and messaging of the yes and no campaigns. Just 25% of voters support funding; 39% “strongly disapprove” of giving the yes and no campaigns an equal amount of taxpayer funding in order to buy advertising and make their case. Voters are also fairly uniform in their views: 30% of Liberal voters approve of funding and 61% disapprove; 23% of Greens voters approve and 68% disapprove; Labor voters are consistent with the whole population. The only noticeable difference is that opponents of same-sex marriage are even less supportive of public funding than supporters. 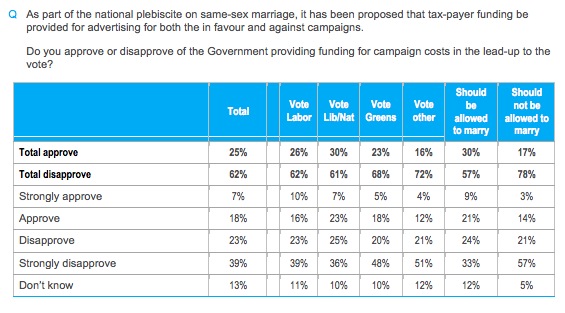 By coincidence, 62% of voters also support same-sex marriage, up from 58% in July; 27% oppose it, compared to 28% in July. There doesn’t appear to have been any significant shift in sentiment on the question in two years: over four polls since October 2015, support has averaged 61%, opposition 28% — which are essentially the same numbers as in 2014.

Voters also rank health as the most important issue they want government action on in the next 12 months. Of the issues presented, 45% nominated improving the health system; and 37% nominated national security and terrorism (compared to 23% when the same question was asked in December 2014). Reducing unemployment and tax avoidance by large companies were next, nominated by 31%; tax avoidance has increased four points since 2014. The other big mover since then was housing affordability, up nine points to 31% as well. Free trade agreements were the lowest priority, with just 5% saying they were important.

I am not surprised by any of that.
Re: SSM, I can’t even work out why anyone thinks it is a good idea to spend $160 million+ on a plebiscite so the majority of us can have a say about something which is none of our business!
Re: foreign investment, it should be obvious what the Oz voter thinks, since the Senate crossbench is full of people who disapprove of it in one form or the other…sometimes with good reason!!

The Tragedy of the Commons is now exemplified by the modern equivalent, opinion polls.
Most people don’t know their arse from their elbow and don’t care that they don’t know nuttin’bout nuttin.