Our productivity record sucks — except compared to everyone else’s

Wonder why we don't hear much about productivity any more? It's because Australia has been outperforming Western economies, especially on labour productivity.

Remember the great productivity debate of a few years ago? Australia’s productivity performance had fallen in a hole, compared to the 1990s, and we had to urgently do something about it. Economists, commentators and employer groups racked their brains to work out what had happened. Was it the mining investment boom? Was it our labour laws? Was it poor management (a suggestion that enraged far-right economists like Judith Sloan)?

Economist John Quiggin questioned the data underpinning the entire debate. Business leaders blamed the Fair Work Act (without any evidence) and said industrial relations reform was urgently needed. The Business Council compared Australian construction productivity to that of Texas and said it was terrible. Tony Abbott said Australia had a productivity problem and we needed to change IR laws to fix it.

Then the national self-flagellation petered out, despite the occasional flare-up — the Coalition, for example, still wants to pass the draconian ABCC bill based on wholly fictional claims about construction sector productivity. Just when we were tormenting ourselves about what was wrong, labour productivity, inconveniently, actually increased, and kept increasing, even as multifactor productivity continued to stall.

Even so, for a subject that was briefly a national obsession, it’s a little odd that you don’t hear about productivity any more — particularly because Australia appears to be doing quite well compared to peer economies.

In April, the Productivity Commission produced its annual report on productivity levels and found growth in both labour and multifactor productivity in 2014-15, based on market-sector ABS data (measuring productivity in government sectors like education and health is problematic, even though health, in particular, is a massive part of the economy). This growth in 2014-15 continued the trend of recent years — since 2011, in fact, when we were agonising about our poor performance.

But a look at international comparisons puts things in perspective. US commentators have been puzzling over negative productivity growth there for some years, and the most recent data shows the US continuing to go backwards. Since 2010 in the US, annual LP growth has averaged 0.5% — well below 2.47% in Australia, but still positive. However, in the year to June, US LP fell 0.5%. The Americans are actually becoming less productive.

And the United Kingdom is faring worse. In February, the Brits lamented some of the worst productivity figures they’d ever produced; since 2009, UK LP growth has regularly been negative and never exceeded 2% annual growth at any point since then. Things are a little better for the Canadians: MFP has mostly been positive since 2010 and out-grew Australia’s MFP in that period, even if LP fell in 2015.

OECD data allows us to compare countries using uniform indicators, providing another perspective on Australia’s comparative performance. Going through the OECD data, it’s hard to find any OECD country other than Canada that has outperformed Australia since 2010. Indeed, for that period, Australia is the stand-out performer on LP compared to a range of comparable economies, the G7, the EU and the OECD. 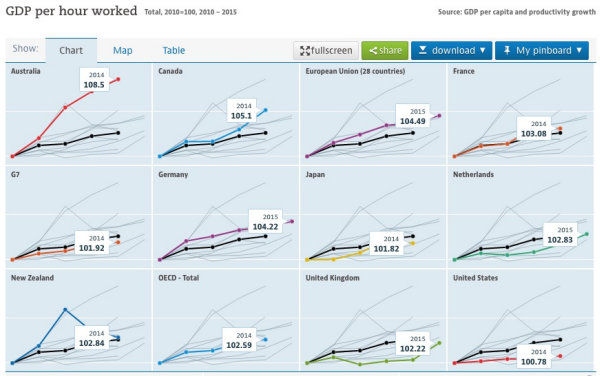 Extend the comparison back to 2005 for major OECD countries and we’re still the best on LP — just edging out the South Koreans. And according to the OECD we outperformed a number of major economies between 2010-14, except for Canada, on MFP as well. 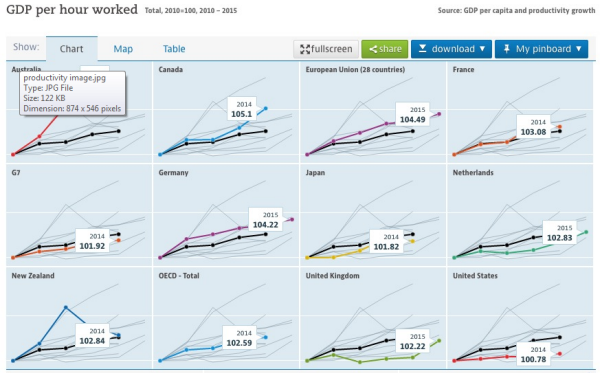 So however poor our productivity performance in recent years, it’s been significantly better than that of comparable economies. That doesn’t give us an excuse to ignore ways to lift productivity — if anything, the productivity malaise across the developed world needs close examination, given the importance of productivity in improving living standards.

There are competing theories about why we appear to have hit a wall in terms of productivity growth in developed countries — from scepticism about the productivity benefits of IT and the internet (or, alternatively, how we measure those benefits), to persistent lower growth crimping the kind of business investment that drives productivity growth. But the traditional business narrative that it’s all done to a peculiarly Australian problem of lazy workers and militant unions appears to have been well and truly exploded.

Can you imagine what Australia’s productivity would be like if our management ‘classes’ actually performed? Starting with the Karpin Report, successive reviews of Australia’s management performance have been somewhat underwhelming to say the least and yet the ‘right’ continues to blame workers for the perceived failure to improve productivity. If you add up the costs of the lack of performance of capital in this country and the costs all the business failures in Australia, including those of banks (remember HomeSide etc) and our mining ‘giants’ (I don’t think that you could ever use that word to describe their management performance after the iron ore debacle to name just one) you end up with a staggering cost to this country. You have to screw a lot of workers really hard to make up for that lot, but they want to try.
But I don’t expect the ‘right’ to ever acknowledge that game. If they were to do so they might have to look hard at the elite groups that sit at the top of the management tree and, if they were able to do that, then they might have to back away from their ‘class war’ against workers. That’s too much fun and anyway it would threaten the whole basis of their ideology and I have yet to see a fundamentalist question their ideology.

I’m with John Quiggin in questioning the statistics, there’s a lot of assumptions built on assumptions in all that, and not necessarily measuring productivity anyway.

But, we are doing it the same as everyone else, and we are doing better on those measures. It always seemed like a try-on by business though, lacking any real management expertise of capacity for innovation, we have got by in the last 20 years largely by buying computers and making full-time workers work longer unpaid hours. Anything remotely looking like quality managerial practice has stayed well away from these shores except for a very few exceptions.

I thought our productivity problems were due to hospitality workers getting double pay on Sunday’s. Fix that and you fix the nation’s productivity issue. Don’t tell me it is actually more complicated, please!