Culleton’s career to be cut short? While newly elected senators are meant to be flying to Canberra for senator school next week, One Nation’s Rod Culleton faces another court case that will mean he misses some crucial lessons — and he might be prevented from serving in Parliament at all. Culleton has told Farm Online‘s Colin Bettles that he would prefer to give up his place in Parliament than plead guilty to stealing a hire car:

Culleton has been charged over an incident at a farm foreclosure where a hire car used by receivers was surrounded by hay bales, making it impossible for it to be moved. The incident features in a 60 Minutes report on Culleton and other farmers and their campaign against the way the big banks treat farmers. Culleton has already had a larceny charge in New South Wales annulled, but this charge will go to trial, despite prosecutors offering him a deal. The case will be heard in the Perth Magistrates Court next week; if he is found guilty of a charge that carries a penalty of more than a year in jail it could mean that he won’t be taking up his place in Canberra.

Spot the difference in The Oz. The Australian published its quasi-luxurious occasional magazine The Deal with this morning’s edition. On page 1 of the main paper it promoted content in the inserted magazine with “Why Cisco is a dream employer”; on pages 16 and 17 there was a big picture and gushing story about the tech company being named “best of the best” in some corporate back-patting competition … 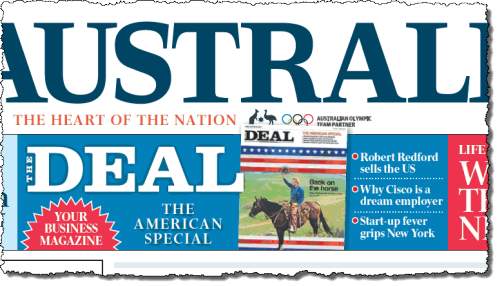 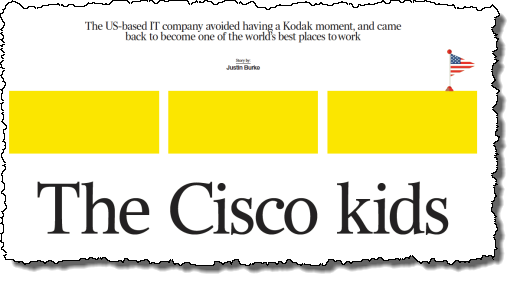 But on page 26, buried at the bottom of a left-hand page deep in the business section (not as well read as the right-hand pages) was a story headlined “Cisco axeing season claims 5500” … 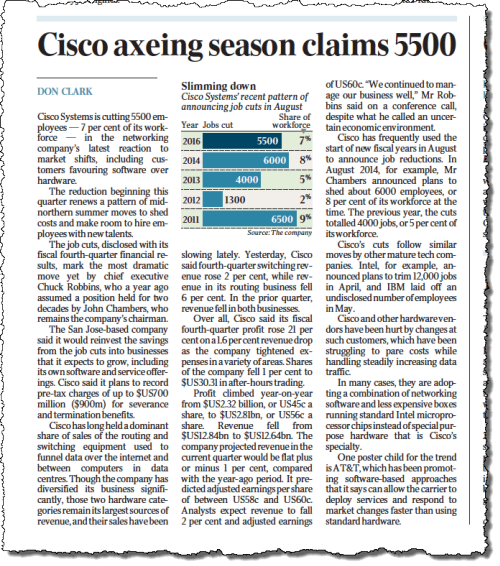 That wouldn’t be ideal for the world’s best employer:

“Cisco Systems is cutting 5500 employees — 7 per cent of its workforce — in the networking company’s latest reaction to market shifts, including customers favouring software over hardware.”

Oops — didn’t see that in The Deal story, which finished:

“What we we’ve started to see is people who had left Cisco wanting to come back”…”Across the Asia-Pacific and Japan we’ve rehired more than 400 people back into Cisco.”

Shock, horror: Sam Newman gets it wrong. Fact-checking the rants of Sam Newman on The Footy Show is not normally worth anyone’s time, but this one piqued our interest. Last night, while taking a swing at the Olympics, Newman had a go at the international media for not calling out racism when the Brazilian crowd booed French pole vaulter Renaud Lavillenie as he came second to Brazilian Thiago Da Silva:

“Has it been lost on you that the black Brazilian crowd booed the white French pole vaulter and the international press have not mentioned one thing about racism? It is just bad sportsmanship. Has that been lost on you over are in Australia?”

As a tipster pointed out to Crikey, Brazil’s population is actually more diverse than just “black”. According to the 2010 census, African Brazilians make 50.7% of the population, while 47.7% identify as white. Maybe that’s why the media is calling it bad sportsmanship (here, here and here), but race isn’t coming into it.

Plimer rebuttals disappear. Back in 2014, Crikey published a piece by Clive Hamilton on the 12 people doing the most to block action on climate change in Australia, including Ian Plimer. Hamilton included this paragraph on Plimer’s book How to Get Expelled From School:

“Plimer’s 2011 book — How to Get Expelled From School (launched by John Howard and mailed by the IPA to hundreds of schools) — listed 101 questions for sceptical students to ask their “warmist” teachers, i.e. those who respect science. The federal Department of Climate Change (abolished by Abbott) prepared a response that thoroughly debunked his claims in words a child can understand. How long before Environment Minister Greg Hunt is instructed to have this demolition of Plimer taken down?”

A Sydney blogger checked back with the department’s website at regular intervals over 2014, and stopped by this week to see if the PDF was still up — but now it’s nowhere to be found. We knew it would happen eventually.

Latham on Trump, if you’re wondering. Understanding the United States election requires nuance, balance and the ability to see shades of grey — all words that come to mind when we think of former Labor leader and controversial multi-media commentator and tweeter Mark Latham. Among the many press releases that appear in Ms Tips’ inbox, this missive from Max Markson (Latham’s agent) this morning prompted interest over what “incredible insight” we could gain from Latham on the US poll. Perhaps what it means to the people of western Sydney …?

“If you’d like to better understand and be more well informed about the 2016 US Presidential Election campaign, then book Mark Latham or Stephen Loosley AM for your next boardroom lunch or function.

“Politically intelligent, knowledgeable and with incisive views on how Trump and Clinton are performing in real time, both Latham and Loosley will deliver an incredible insight into what is happening in the cauldron that is the 2016 US Presidential Election race to be decided on Tuesday 8thNovember.

“Why Trump? Has politics become another reality show? What does it all mean?”

What does it all mean, indeed.

Aussie banks really targeted? Naturally the big four banks being sued in a New York court over rate fixing manipulation by a couple of US hedge funds and another big investor grabbed headlines this morning. Here’s how Fairfax reported it:

“The complaint accuses the five-strong cohort of Australia’s financial institutions of racketeering, wire fraud and collusion under America’s Racketeer Influenced and Corrupt Organisations Act (or the RICO Act) and notes the alleged rigging had a ‘reasonably foreseeable effect on United States’ domestic commerce’.

“Florida-based derivative trader Richard Dennis — who is speculated to be the famed trader known as the ‘prince of the pit’ — and hedge fund Sonterra Capital Master Fund and Frontpoint Financial Services filed the claim.”

Naturally our banks (Macquarie is the fifth after Westpac, ANZ, NAB and CBA) deny the claims and say they will fight them. The other banks that are defendants in the action are Citibank, BNP Paribas, Credit Suisse, Deutsche Bank, HSBC, JPMorgan Chase, Lloyds, Morgan Stanley, Royal Bank of Canada, Royal Bank of Scotland and UBS. International broking houses ICAP and Tullett Prebon are also named. The Australian Securities and Investments Commission settled claims with UBS, RBS, and BNP Paribas over alleged BBSW (bank bill swap rate) manipulation in 2013 and 2014.

But a bit of research of the two hedge funds finds a case reported in early July involving the duo in a similar action in Singapore over a 2013 rigging claim made by the Monetary Authority of Singapore against a group of banks, many of which are in the above list.

“… as filed by Greenwich, Connecticut-based FrontPoint Asian Event Driven Fund and New York-based Sonterra Capital Master Fund and traces back to the 2013 scandal in Singapore when the central bank found more than 100 traders in the city-state tried to rig key borrowing and currency rates.”

There seems to be a pattern of litigation here. So in these times of hard-to-find profits and yield (and fat fees), is this a new hedge fund investment strategy?

To be fair to Sam Newman – that was his point. The Frenchman was not being booed because he was white but because he was in opposition to the Brazilian vaulter. It all harks back to the Goodes controversy where certain sections of the media labelled every person who booed Goodes a racist.