Why does the ACL want TV stations to be forced to run its ads? Plus other media tidbits of the day.

Why the ACL wants to change the law. Responding to Crikey’s report from this week about the Australian Christian Lobby asking George Brandis to make sure its ads will be aired in the lead-up to a plebiscite on marriage equality, a law firm has explained why the ACL is after a law change.

Saying it’s something they’ve been asked by other lobby groups, Marque Lawyers’ Hannah Marshall and Michael Bradley said in an email this morning that a lobby group could not, under current laws, do anything about stations choosing not to air its ads:

“That means that lobby groups like the ACL, who are not political parties, can never force TV stations to air their political ads.  Even political parties only get the benefit of these rules for about a month before an election.

“A plebiscite is not an election.  That means that under the current rules, the TV stations would have no obligation to air any ads relating to it regardless of their source.”

As we pointed out on Tuesday, there are conditions in the Ad Standards Board’s codes about vilifying minorities. Some networks, like SBS, have in the past chosen not to air political advertising against gay marriage. — Myriam Robin

News close to Sky deal. It’s been a year since we first heard of News Corp’s interest in outright buying Sky News, and after so many false starts, we’d almost forgotten about it.

But it is happening, Sydney media sources say. In fact, we understand negotiations are nearly concluded. Confirmation is likely to filter through to the Media section of The Australian, so keep an eye on that.

Any deal would mean News Corp tightening its control over the pay TV industry in this country. It already controls Fox Sports, which supplies the most valuable programming to Foxtel (Foxtel is 50% owned by News, which also has the right to appoint the management of Foxtel). News Corp also owns nearly 15% of the Ten Network, as well as over 60% of the daily newspapers in Australia, and is awaiting regulatory approval for the purchase of APN’s regional dailies and weeklies and free papers in northern NSW and regional Queensland. — Myriam Robin

Women’s mags struggle. Baring extraordinary digital success, it seems likely that Australia’s major mag publishers will cut some of their titles loose in the coming year.

These jumps show some magazines, particularly those aimed at men, are still surviving. But their performance is inconsequential to the finances of Australia’s three major magazine publishers, which depend heavily on the success of the ad-filled, high-circulation female-friendly magazines.

The biggest loser in the audit was Cosmopolitan, which recorded a massive 42% fall to 45,309 copies a month, a loss of nearly 33,000 copies in over the year. In June 2013 it was selling more than 98,000 copies a month. Cosmopolitan’s fate now seems to be heading in the direction of Cleo, which was canned by Bauer at the start of this year.

Stablemate Dolly’s move to a bi-monthly earlier this year didn’t help the faltering Bauer title — its sales are down 26%, to 30,010. It’s doing slightly worse than its main competition — Pacific Magazine’s Girlfriend lost more than 17% of its sales in the year to 31,043.

The women’s titles doing better tended to be glossy monthlies — high-brow fashion titles like Vogue (up 0.1%), Vogue Living (up 0.6%) and Harper’s Bazaar (up 0.8%) aren’t operating off massive circulations to start with, but at least they’re not going backwards. The odd one in the category is Pacific’s Marie Claire — down 10.3% to 72,346 copies. — Glenn Dyer

TV Ratings. Only a few more sleeps to go before “normal” programming returns, ie the 2016 series of The Block starts on Nine on Sunday night, while Ten’s expensive Australian Survivor starts the same night. It is a big week for Nine and Ten as they attempt to fight back against Seven which has already won the prime time ratings for the year. Ten also ends its financial year the week after next on August 31 (and it will the best 12 months the network has had for five years). Nine reports its 2015-16 figures next Tuesday with a board meeting next week to approve them. Other changes are said to be in the offing for the network. The June 30 figures have already been guided lower, and the key is that the guidance is for 2016-17 (Seven has already forecast a 15% to 20% slide in profits because of the new AFL contract costs and the costs of the Olympics coverage). Nine has the impact of the new NRL contract to take into account in the new financial year.

Last night was more games and a big win for Seven, even though the Australians didn’t do well again (The Kiwis had a good day). Seven says the streams have topped 32.1 million, which if the app and the streams were as bad as many “experts” and users claim (they were to start with because of the ropey servers at the Games broadcasting centre), then the number of streams should have been much lower. But they are not and as everyone has gotten use to them, then the numbers have soared. Seven said this morning more than 17.5 million people have watched the games so far on its main channel, 7TWO and 7mate.

And if you are still interested in the Olympics, the men’s basketball team plays a semi final early tomorrow morning and if they win they will play the final (presumably against the US) early Monday. The first  Rugby Union test against the All Blacks is on Ten and Fox Sports tomorrow night (from Sydney), and the NRL and AFL competitions are in their final rounds. — Read Glenn Dyer’s full TV ratings.

Front page of the day. New guidelines for judges in New South Wales tell them that emotional and psychological abuse may include things like threatening to divorce or abandon a victim if he or she fails to comply with demand, using threats of suicide to keep victims from leaving, restricting the victims’ contact to family and friends and restricting access to a car or finances.

We got that from the Tele, which has write-up of the new guidelines and how they’re a response to victims’ experiences on page 7.

But what’s on the front page?

“Everything from giving partners the silent treatment to chastising them over household chores will be treated as domestic abuse, under new legal guidelines.” 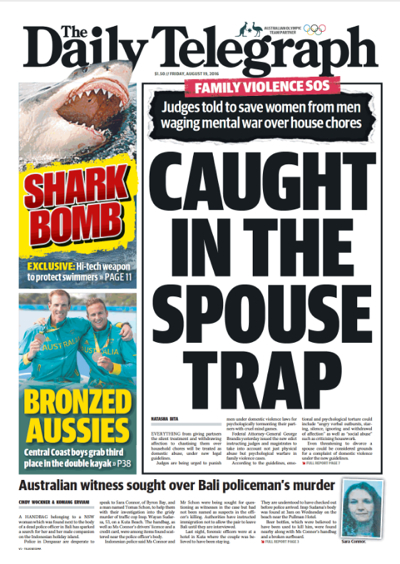