Australia must settle for silver in the games of bad behaviour overseas.

It’s been a bad Olympics for Australia. Our medal expectations have been dashed, and now we’re getting beat at something we’re normally pretty good at: behaving badly overseas.

Aussie swimmer Josh Palmer did his best yesterday: found robbed and “disorientated” in Copacabana after ditching the village for an all-night bender. Teammate Emma McKeon has been grounded, rather harshly if you ask us, because she failed to let officials know she was staying with friends.

But it’s nothing on Ryan Lochte, one of the greatest American swimmers if Michael Phelps had never been born. In a medal-worthy act of stupidity, he reportedly menaced the locals, banged up a bathroom and covered it all up with a TV lie about being robbed at gun point. 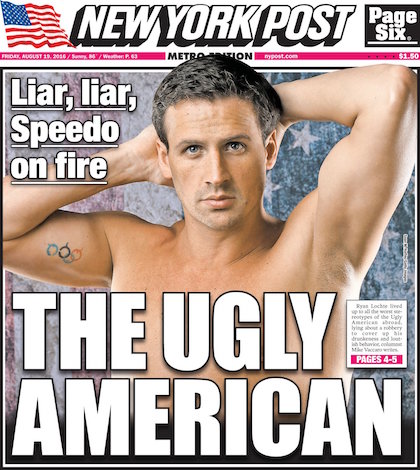 In our own act of unprecedented recklessness, we commend an opinion piece from today’s New York Post. Writes sports hack Mike Vaccaro:

“Maybe panicky athletes from Kazakhstan or Kenya or Kuala Lampur might have reacted similarly and seized on the easy (though rooted-in-reality) narrative presented for months, that Rio was a cross between the Wild West of yore and the Fort Apache Bronx of the 1970s. Maybe it would have occurred to a rower from Rwanda or a decathlete from Denmark or a sprinter from Spain to go that way. Maybe. But that’s not who did this.

“Ryan Lochte — ugly American with a truly ugly hairstyle — did it.

“So we have him, and his kind, to thank for the suspicious stares we get on the streets of Prague, or the rolled eyes we get standing in line for gelato in Florence, or the curious questions we get from cab drivers in County Clare.”

Thanks for taking the heat, Ryan. We’re happy with silver on this one.

Is Michael Phelps really the greatest ever Olympian?

And the gold for whingeing about not winning goes to …

Not sure about the “truly ugly hairstyle” – compared to what, chwissy’s painful crimps?

Who Gives A Shit

Please, are the Olympics over yet?