Up close and personal with the PM

When it comes time to investigate how protesters got on stage with the PM, there's no high tech secret to be found.

While Prime Minister Malcolm Turnbull was hoping that yesterday would be the time to set his agenda for the next few months of government, the headlines were instead dominated by the protesters who marched up on stage with posters, demanding that the government close offshore detention centres. The AFP says it is investigating how the protesters got into the event, held at the Grand Hyatt Hotel in Melbourne and hosted by the Committee for Economic Development of Australia. The Age reported that the protesters had “infiltrated” the space, with Tony Wright’s description of events in fine form. We suggest police investigate how protesters used their credit cards to buy tickets just like everyone else, and how some of them registered as members of the media — this was hiding in plain sight.

While the protest took the wind out of Turnbull’s sails, it did make us in the Crikey bunker think that getting close to our leaders is very easy in Australia. In 2013, the intruder who got up on stage with the jubilant Abbott family on election night had made it into the venue by making his own wristband for the event. 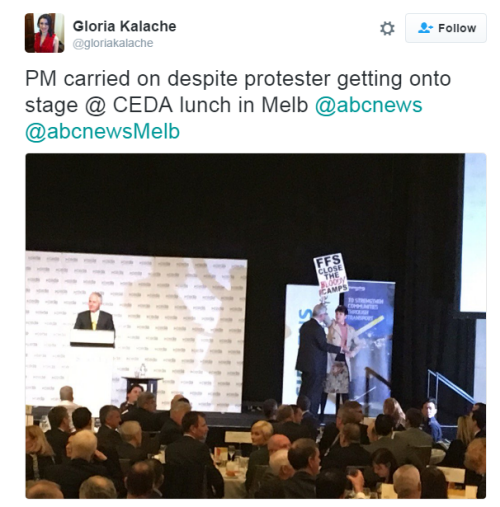 Turnbull couldn’t catch a break yesterday. When he gave money to one of Melbourne’s many rough sleepers, some media outlets decided to focus not on the good deed but on what Turnbull was holding in his left hand: cash that he wasn’t giving away. It’s a lose-lose situation for Turnbull; if he is seen to be giving an extravagant amount of money to one homeless person, there would be criticism, and he comes under fire for keeping some cash for himself. Ms Tips has a solution though — get a nice leather wallet so no one can see what is in it. Father’s Day is in a few weeks, so he shouldn’t have to wait long.