The Press Gallery's seats have gone elsewhere. And other media tidbits of the day.

Press gallery seats given away. Only 25 members of the parliamentary press gallery will be able to view the Governor-General’s address to open the new Parliament on August 30, as the 50 best seats in the Senate gallery (where the address occurs) have been offered to what press gallery president Andrew Meares describes as “guests”.

The address is one of the few times a seat in the Senate gallery is highly sought after — the seats are usually empty.

In an email to members this afternoon, Meares wrote that the Usher of the Black Rod had told him of the restricted attendance requirements today. The press gallery committee, he wrote in an email to the body’s members, believed the restrictions “unprecedented, unacceptable and unworkable”.

Meares said that he’d written to Senate President Stephen Parry to ask who decided this would happen and who would be occupying the 50 seats. He asked whether the seats had been “sold or offered to party donors or supporters”, and whether the opposition or minor parties have been consulted.

The gallery is not co-operating with the request to supply the names of the 25 journalists who will be attending. “The assigning of journalists to cover proceedings is determined by media organisations not the Press Gallery committee.”

While the restriction on attendance may be “unprecedented”, tussles between the press gallery and the Parliament are not. Heightened security measures in the last Parliament brought new restrictions for journalists, especially visiting ones from outside the gallery, who were not allowed to wonder the gallery unescorted. The increased use of bollards to separate journalists from politicians was another gripe. — Myriam Robin

Drag queen takes on Foxtel. If Game of Thrones fans thought they were getting a raw deal with Foxtel, spare a thought for fans of reality competition hit RuPaul’s Drag Race.

The show is credited with bringing underground drag culture to the masses and creating an international community of queer misfits devoted to the art of drag. It was last month nominated for its first Emmy Award.

But for Australian fans, getting in on the celebration isn’t easy. Foxtel has the exclusive screening rights for the program in Australia, which it airs a month after episodes premiere in the US …

TV Ratings. Olympics fatigue emerged last night, with viewer numbers falling to their lowest since the game started. But that was OK for Seven because the other networks had nothing to match the still high average audiences for the coverage. After cruising in second for most of the games, the key In Rio Today segment of the coverage, starting at 7pm and running to 10pm dipped to fourth nationally with 1.277 million viewers (down around 300,000) and in the metros, fell under a million viewers for the first time since the games started and managed 845,000 viewers. The evening segment averaged 1.085 million nationally and 777,000 in the metros.

Seven won the metros and the regions – the overall share remained above 30% at 33.1%, but the main channel share in the metros fell to 23.9%, the lowest since the games started.

The Bachelor managed 1.101 million national viewers for Ten — mostly Rio bored young female viewers who dominated some demos. It was not a great episode with a walk-out. We need some cross training: some gymnastics, boxing judges or synchronised judges to sit on a panel on the program and do the scoring. The Bach is heading for bloodsport anyway. Gruen was OK again and managed a solid 1.137 million national viewers for the ABC.

A big commendation for the 7.30 report last night on the inquest into the Lindt Cafe siege and police actions. The Sean Rubensztein Dunlop report was hard-edged, concise and right on the mark. It had good talent and left viewers with the strong impression of a lack of police competence. Quotes from two international experts who appeared at the inquest also added a lot to the report. It was another example of how far the ABC is in front of Seven, Nine and Ten in explaining the big and small news stories (and breaking news). Interesting that Monis’ name wasn’t mentioned once in the report. — Read Glenn Dyer’s full TV Ratings

It will be published by Black Inc and due out next year. Manning told Crikey it was part history, part biography, part asking the question: is there room in Australia to sustain a third party in the long term?

“It’s a real inflection point for the Greens at the moment — are they a party of protest or a party of government?” he said. It’s an interesting period for the Greens, who weren’t really able to capitalise on the massive backlash against the major parties in the last election.

Manning wrote the cover story in the current issue of The Monthly on the topic — but he reckons there’s plenty more to say. The Greens have a reputation for being less transparent with media than the major parties, so does Manning fear he won’t get the access he needs? “I think they’re used to being ignored — they don’t know how to handle media interest in their own internal politics,” he mused when we asked him about it.

So far though, Manning says he’s getting good access. That will make a change from his last book — his recent biography on Malcolm Turnbull was completed without a great deal of cooperation from its star. Fingers crossed it’s less legally contentious too — as Crikey wrote last Friday, Liberal donor and businessman John O’Sullivan is suing Manning over three paragraphs in Born to Rule. — Myriam Robin

The Tele‘s page 3 (and 7) girls. Earlier this week, the Tele’s sports pages featured a collage of “hot” female Olympians from across the world. Today’s edition continues on the theme, though more prominently — the athletes in bikinis are all over the news pages … 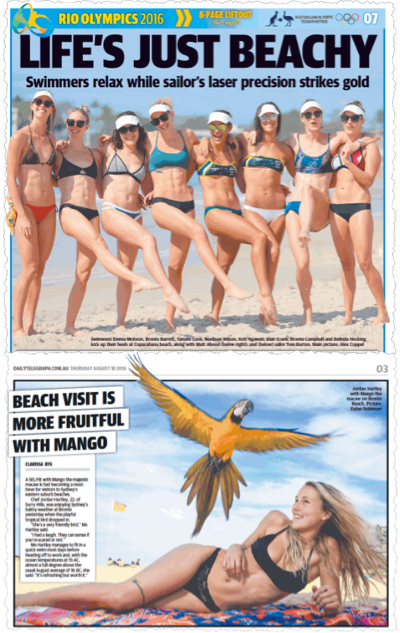 There’s also a full page of beach volleyball live action shots on page 52. Which seems a lot of attention to focus on the one sport …

The delicate balance of indy publishing. Journalist Max Chalmers’ last day at New Matilda was yesterday. His no-holds-barred reflection on the website’s purpose is worth a read:

“There are plenty of criticisms I have of the publication. Its gender balance, for instance, is terrible, something that has clearly had an impact on editorial decisions. There were days when we went too far.

“Being an aggressive, confident, and genuinely independent outlet can be a two-edged sword that way. On one hand, it means you might be the only ones to say, stuff it, let’s publish the Barry Spurr emails. It means that you push where others won’t, or can’t. It means you know you are going to get sued but publish anyway.

“On the other hand, it also means that on the day you get it wrong your mistake is likely to be compounded. The independent mentality suddenly plays against you.

“What I’ve realised is that the successes and excesses of outlets like New Matilda can’t be separated; they’re expressions of the same core instincts. When it works, there is a delicate balance; the sober analysis of Ben Eltham and the biting commentary of Chris Graham; the clickable far-right outrage bitsand drier reports that contradict their assertions; the stuff that other outlets run and the stuff they won’t touch.

“This is a balance that can be easily tipped. Too far one way and you lose your reach and distinctive purpose. Too far the other, you hurt your own credibility and inspire masses of criticism.”

Australians ditch papers. The New York Times has a piece on where the end of Fairfax’s daily printed editions will leave Australian democracy. It includes these eye-opening graphs … 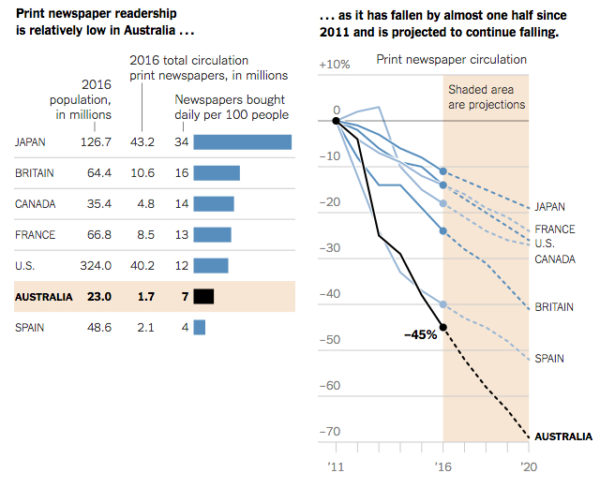