Wendi winning the breakup? While Rupert Murdoch is happily married to Jerry Hall (with these pictures on the beach to prove it), his ex-wife Wendi Deng Murdoch is living it up in New York, with social and business contacts that show that she was never happy to be anyone’s sidekick. Her powerful friendships have hit the spotlight since Ivanka Trump posted a photo of herself and Wendi holidaying in Croatia this week: 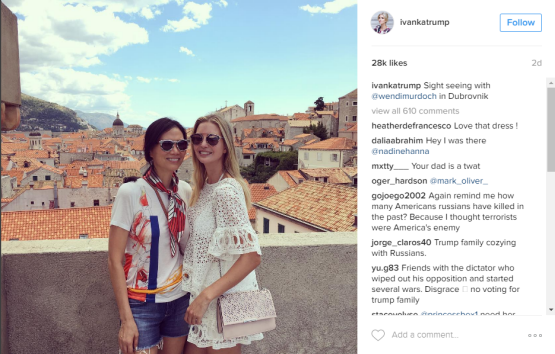 In a profile of Wendi in a recent edition of US Vogue, it’s reported that she was the one who introduced Ivanka Trump to her husband:

“She is a legendary matchmaker; a friend told me that whenever a famous person is dating another famous person, chances are that Wendi Murdoch brought them together. (Recent success stories: Anne Wojcicki, the tech entrepreneur and ex-wife of Sergey Brin, and the baseball player Alex Rodriguez; Xin Li, the model turned Christie’s power broker, and the music mogul Lyor Cohen; Ivanka Trump and Jared Kushner.)”

Wendi also addresses the rumours that she is dating Russian President Vladimir Putin in the article, saying she had never met him:

Ivanka Trump and Wendi Murdoch have featured in each other’s Instagram feeds before, but this latest image comes after presidential candidate Donald Trump’s links to the Russian President have also been probed by the press. Conspiracy theories are already running hot, but if Wendi hasn’t even met Putin, maybe now is the time for some cold water.

Youth play Hunger Games. From the power plays in New York to the halls of student unions and back offices, Ms Tips hears that an unlikely alliance is taking shape in the Victorian branch of Young Labor. Elements of the Right factions, including the National Union of Workers and Transport Workers’ Union, have formed an alliance with the Socialist Left faction in the lead-up to the Victorian Young Labor elections, we hear.

The deal will lead to the election of the Socialist Left’s Julijana Todorovic to the role of president, even though the Socialist Left doesn’t control a large proportion of the vote. So what do the Right factions get in return? One tipster suggests it will be delegates to the Australian Young Labor conference later this year. Last year’s Young Labor elections in Victoria were a messy affair, when a deal between Right factions fell apart at the last minute, the Socialist Left’s Annalivia Carli Hannan was elected president in exchange for other positions on the executive committee.

Ms Tips understands that the far-right SDA will be left out of the deal, leaving it as the only grouping on the outer.

Milking it for all it is worth in NZ. As Malcolm Turnbull and Barnaby Joyce huffed and puffed at the board of Murray Goulburn, those cunning Kiwis were conducting another fortnightly global dairy auction, and guess what, their prices jumped 12.7%. With the 6.6% price rise a fortnight ago, prices are up nearly 20% in a month. So is a dairy boom looming?

In fact the average global dairy price is now back to where it was in October of last year, before it tanked for a third time in three years. The price of New Zealand’s major export, whole milk powder (WMP), jumped 18.9% and is up nearly 30% in the past month. Fonterra has a farm gate price of NZ$4.25 a kilo of milk solids, some NZ analysts are looking at prices closer to NZ$5 if the current rebound can continue. Even at that level many NZ farmers will still be doing it tough. But Murray Goulburn and Fonterra’s Australian farmers won’t see much benefit. How the prices were stuffed up by Murray Goulburn and Fonterra is the key, not government aid, loans or grants.

That’s why yesterday’s TV opportunity and meeting in Canberra was useless grandstanding by the PM and his Deputy. Something more substantial in the way of inquiry is needed to find out why the two dairy giants waited for so long to cut prices in the face of the price falls on the global dairy trade auction site. The evidence was there. Fonterra was cutting prices in NZ and warning of worse to come, but somehow Australian farmers were exempt. A full explanation and a bit of hard-edged blame might be needed to expose what on the surface seems another example of corporate incompetence, which has damaged the lives of tens of thousands of people and animals.

Never mind the scrutiny. The curious case of the former Tasmanian mining minister continuing to use an email account at his former mining company while being the minister has taken an interesting new turn.

Adam Brooks resigned in June over a perceived conflict of interest due to the email debacle, and Tasmanian Premier Will Hodgman announced that the Crown Solicitor would examine Brooks’ private server at his company, MSS, to see if Brooks’ claim that a filter was set up to block all non-personal emails was legit.

But yesterday the audit was all called off because Hodgman said that, in the course of the divorce proceedings between Brooks and his wife, his wife has objected to the audit being undertaken. Instead the government is simply reviewing the decisions Brooks made as mining minister, and will not let him come back to the ministry until the divorce proceedings are finalised and his financial interests in MSS are divested.

Tasmanian Labor is calling for Brooks to be referred to the Integrity Commission over the matter.

The ’90s are back in style. Yesterday was the first day of “pollie school” for the incoming members of the House of Representatives, as they learned to watch their waistlines and call home often. Most new MPs and senators are yet to sit for their official photo, which will be used for as long as they are in Parliament. For some MPs that have been trekking to Canberra for many years, the photos give a good insight into what toll the job takes on one’s body and hairline (we wouldn’t dare to suggest who we mean, but you can check the list yourself). New senators are due to attend senator school next week, but one newbie already has her photo sorted. Pauline Hanson’s photo is a throwback to her first stint in parliament — the green background stands out among all the red: