Michael Kroger is dead, according to Joe Aston. Plus other media tidbits of the day.

Joe Aston kills off Michael Kroger. From the back page of today’s Financial Review …

The sentence, by Rear Window scribe Joe Aston, continues with the word “right”. Kroger was alive and kicking the Business Council of Australia last time we checked, so certainly not dead. Anyway, hat tip to Dan Ziffer for noticing this. — Myriam Robin

Nauru leak could become data retention test case. Any investigation of the Nauru leak to The Guardian could trigger the first use of the Journalist Information Warrant scheme, whereby two former judges appointed by the PM (“public interest advocates”) will decide whether it’s in the public interest to allow the Australian Federal Police to access the metadata of the Guardian Australia journalists involved with the story, says the journalism union. The Media, Arts and Entertainment Alliance has previously raised concerns that Supreme Court justices Kevin Duggan and John Muir, appointed to the panel in January to argue against secret warrant applications by police, have no media experience.

It’s not clear any such investigation is going on, though MEAA says one would expect it from past experience. Paul Farrell, the journalist who came into possession of the files some months ago, has previously had his sources investigated by the AFP. The last time it happened was before the amendments requiring extra hurdles for accessing journalists’ metadata were passed by Parliament — forced through by Labor as the cost of its support for mandatory metadata retention. — Myriam Robin

Free, completely complimentary, speech. Not only have The Australian’s opinion writers rallied around Bill Leak, but so, it seems, have its readers. Today’s letters page has five letters jumping off Monday’s extensive coverage on the saga (though the controversy has died off pretty much everywhere but the Oz), and all express support for free speech and Leak’s right to offend.

Though maybe this is by design. Crikey is aware of at least one letter submitted yesterday that was rather critical of Jennifer Oriel’s assessments that wars have been fought over the right to free speech, but it didn’t make the cut. Oh well. — Myriam Robin

Name the biggest loser. More cost-cutting (and possible job losses) could be ahead for News Corp, according to its recent 10-K filing. Both the News and Information Services and the Cable Network Programming segments say they are at risk of goodwill impairment — that is, that is, the value of the non-financial factors that add to the business are falling. As of June 30, 2016, nearly $1 billion of goodwill at these reporting units was at risk for future impairment.

The company also flagged that another restructure could be on the cards — and that usually means more people to head out the door.

Weirdly, that was’t reported in the News Corp outlets yesterday, even in The Australian‘s Media section. Now we can play guess the asset. The Australian? The Daily Telegraph or The Courier-Mail? Or perhaps it’s The Sun in the UK that is struggling. It wouldn’t be The Times or Sunday Times in the UK, which have reported higher sales (a small operating profit in 2014-15) and a rise in digital paywall subs, nor would it be The Wall Street Journal after its strong rise in paywall subscriptions and the milestone of digital revenues now exceeding those from analog sources.

The other thing to consider is that the Australian newspaper operations are the single largest groups of assets in the News and Information business of News. But there’s a left-field contender, The New York Post, which must be losing a lot of money because it didn’t feature in any of the reports on how the various parts of News performed in the year to June. In fact, the Post was conspicuous by its absence. But could it account for US$1 billion in impairments on its own? Hardly. News Corp had US$3.714 billion of goodwill in its balance sheet at June 30, up from US$3.06 billion a year earlier, so any reduction in the next year would take the goodwill figure well under US$3 billion (which also includes more than US$1 billion for Fox Sports Australia).

And if News is forced to lop US$1 billion or so off its asset values, it would be following the hated Fairfax Media, which chopped around $980 million off the value of its Australian and NZ newspapers. — Glenn Dyer

Nielsen ratings revealed. Australian news consumers are more likely to read CNN than The Canberra Times, the British Independent than the New Daily, and the Mirror than WAToday.

While the oft-reported top 10 news sites all boast large Australian reporting staffs, go a little further down the list and that’s not the case. A leaked list of 154 news websites tracked by Nielsen shows the extent to which Australians are plugged into the global conversation, turning to foreign news outlets far more readily than those in another state for information and entertainment.

The most-visited foreign news site is the NYTimes.com, which is also the 20th most-viewed news website overall, with 1.1 million Australian unique browsers a month spending an average of nine minutes per session. Of the 100 top-rated news websites viewed by Australia, nearly half (41) are based overseas with no significant Australian footprint. The list reflects both the might of media brands and Australia’s cultural heritages. While American news sources dominate, British websites are also popular. New Zealand’s two major news sites — stuff.co.nz (376k unique browsers) and the nzherald.co.nz (318k unique browsers)– are both in the top 60.

The list also helps explain the advantages to setting up a local edition in Australia for many international news brands. With large numbers of Australians already flocking to foreign sites, one could, with a small Australian commercial and reporting staff, draw even more. The BBC is the latest to try this technique, having added an Australian editor to its local commercial team in recent months.

The ratings relate to July, and show the Houston Chronicle edge in at number 44 (with 438,000 unique browsers). This is likely related to the Dallas police officer shootings that occured in Texas that month — Australians flocked to the nearest major paper for informed coverage. — Myriam Robin

Front page of the day. Jamaica’s Daily Observer celebrates another gold from a home-grown hero … 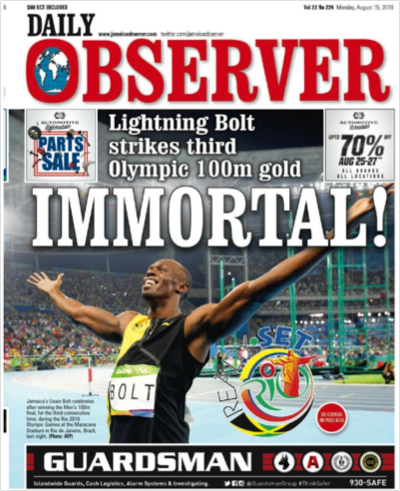