Freedom Boy on the loose ... about data retention ... Greens settle their preselection battle ...

Don’t mention the data retention. Attorney-General George Brandis has an annual meeting set up with business leaders on issues of national security, under the name of ICONS (Industry Consultation on National Security). Essentially it’s to talk about espionage, trusted insiders, organised crime and terrorism — all the fun things. But it also includes a deregulation component, where the government asks what it can do to cut red tape.

Media was banned from the most recent event, in March 2016, but Brandis’ speaking notes (recently released through freedom of information) indicate the Attorney-General spoke about reducing red tape:

“The Turnbull Government is committed to eliminating any unnecessary regulatory burden on business, and cutting red tape. What is your organisation’s experience with national security regulation.”

The very next line indicates the government was prepared to face backlash to its data retention scheme, a year after the legislation passed: 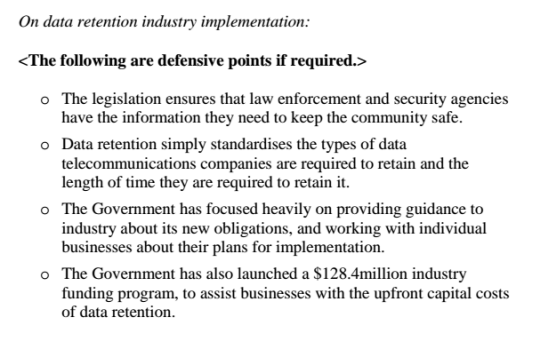 A speech AGD secretary Chris Moraitis gave regarding foreign investment in critical infrastructure makes for amusing reading after the government’s decision to block the sale of Ausgrid to Chinese companies, and how the decision was dropped on the New South Wales government:

“Early and ongoing engagement with state and territory governments, however, will continue to be important to ensure potential risks are effectively managed through the relevant state based legislation and leases.

“For example, this type of arrangement was implemented in the recent privatisation of the NSW electricity transmission network. Commonwealth agencies worked with NSW officials to develop a suite of conditions and undertakings to address national interest considerations, which formed part of the lease licence conditions, before the process was finalised.”

Freedom Boy in Canberra. The rookies of the House of Representatives are in Canberra and learning how to do their new jobs. New member for Goldstein Tim Wilson used the Facebook Live video feature to give his followers a tour around his very bare parliamentary office. Viewers see the “long, thin, lifeless” corridors before getting an insight into where Wilson’s staff and the MP himself will sit. “Smells like a rented apartment that has just had its dry clean for the first time” is the verdict from Wilson, but Ms Tips is wondering how long it will be before the Parliament House Twitter account starts scolding new MPs for filming where they shouldn’t. 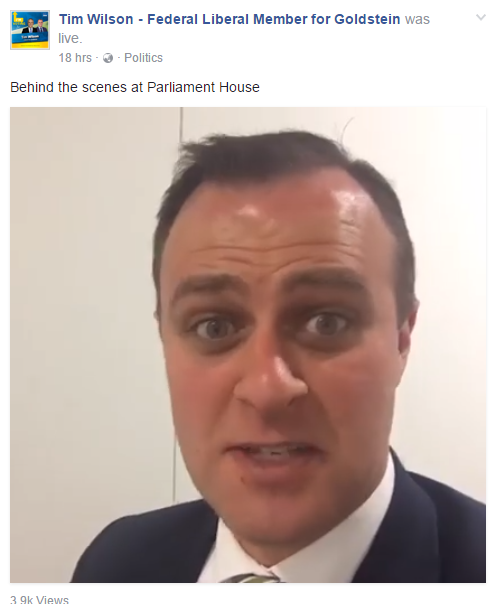 Staff envy. A small report in The Australian today says that Pauline Hanson’s One Nation Party and the Nick Xenophon Team will both be given funding for seven staffers for each of their representatives in the Senate, with NXT lower house MP Rebekha Sharkie also receiving seven staffers — that’s 28 staffers for each party on the crossbench. It’s well above the number of staffers each Greens senator has — they each have four, and the party has an extra 15 staff on top of that, mostly working out of leader Richard Di Natale’s office. While seven staffers each seems a bit extreme, perhaps the government budgeted for extra staff to head off an early battle with the crossbenchers — at the start of the last Parliament, Clive Palmer demanded similar staffing numbers to the Greens, making quite the fuss.

And the preselection goes to. We’ve been reporting on the bitter NSW Greens’ eight-candidate preselection battle for the state seat held by the late John Kaye. The results came in over the weekend, and anti-CSG campaigner Justin Field, preferred by the so-called moderates, won out. Field had a significant margin over his nearest rival, the Eastern bloc’s James Ryan, 955 votes to 772. We hear some members voiced their concerns about the potential for factions to seep into the NSW branch of the Greens, but party co-convener Hall Greenland told Crikey last month he believed once preselection was over the internal ructions would settle down somewhat.

Using the dying to make a buck. Amid all the Rio hype, fears of Donald Trump’s ascension, Brexit madness in Britain, bombings in Europe and Syria and Yemen, there’s a story from New York, via the Financial Times, that exceeds all those terrible tales. Here’s what the Financial Times reported on its website this morning:

“The top US securities regulator on Monday charged a hedge fund manager with paying terminally ill patients to use their names on brokerage accounts to defraud companies. The Securities and Exchange Commission accused Donald Lathen with running a scheme where he paid $10,000 to nursing home and hospice patients with less than six months to live to open accounts, bought bonds and notes in the accounts at a discount, and when they died would redeem those securities by representing to the issuers that he was the surviving owner of the account.

“The alleged fraud centers around so-called survivorship options, also known as ‘death puts,’ which allow bondholders to redeem securities at par plus accrued interest when the holder dies. The SEC said that the surviving owner was in fact the hedge fund, Eden Arc Capital, which because it is a corporate entity, can never die. Mr Lathen recruited at least 60 people to his scheme, and issuers paid out more than $100m as a result of the scam, the SEC alleged.”

And what did Lathen’s lawyer say in his defence: “We have no doubt that Mr Lathen’s investment strategy is entirely legitimate and violates no law, and we intend to vigorously defend him against the SEC’s meritless charges.”

Only the US could throw up a story as heartless as anything from any trouble spot in the world (short of murdering and abusing children, *cough* Nauru *cough*) — using the dying for self-enrichment.

Most exciting time. Australia might not win any more golds in Rio, but according to Tourism Australia we’re winning at holding exciting conferences. This press release from Trade and Tourism Minister Steve Ciobo’s office yesterday had us giddy with excitement:

“New international research on business events has found Australia is the most exciting destination for conferences. Australia also ranked first for scenery, sight-seeing, and being a destination worth travelling to.

The research found most potential delegates seek some kind of balance between business and leisure, both from the conference and the activities surrounding it. Respondents said the ideal conference is one that balances professional outcomes with strong destination appeal.” 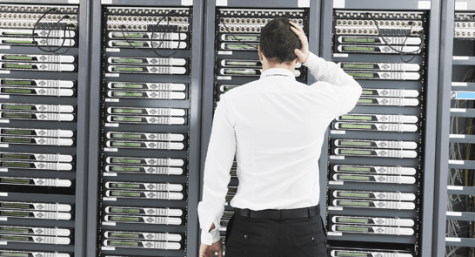 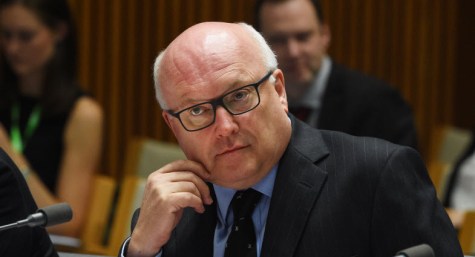 Finding the next Freedom Boy

The great thing about FB in Canberra is that he has so much committed to record. Where’s he gong to compromise first?